Assassins in the Army?!

I once monitored right-wing radicalism in the military. Why Monday's militia bust did not surprise me 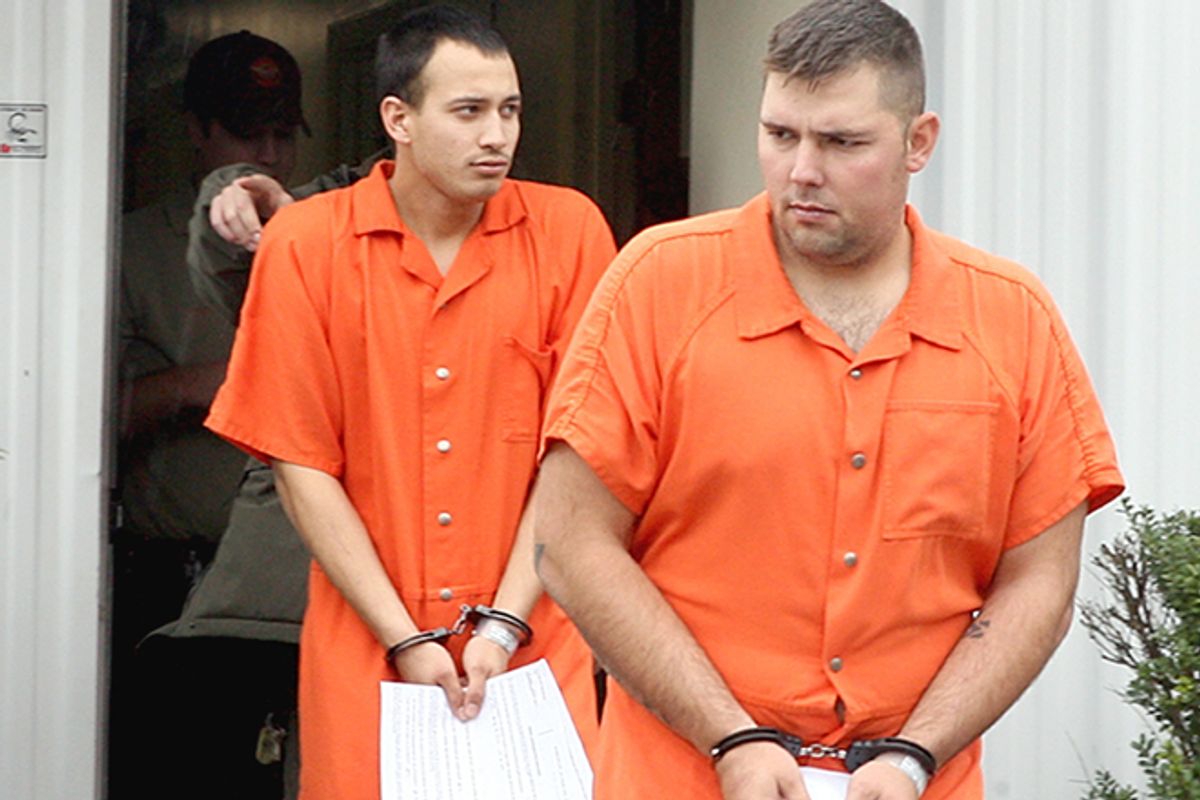 Yesterday, we learned that four active-duty U.S. Army soldiers, who were hoarding weapons and ammunition, had formed an anti-government militia group. They have been charged in the deaths of two associates who they worried might tip law enforcement to their clandestine activities. This is just the latest incident in a string of violent acts spanning the past three years that illuminates a linkage between some U.S. military members and violent right-wing extremism.

In April 2012, a former U.S. Marine (now militiaman), who had been originally charged with possession of a stolen machine gun with grenade launcher, was convicted of child sex abuse. On May 2, 2012, a former U.S. Marine recruited into the white supremacist movement shot and killed himself with an assault rifle that was used earlier to murder four family members (including a 2-year-old girl) at a home in Gilbert, Ariz. That same day, a 65-year-old Army veteran from southeastern Kansas was sent to prison for possessing incendiary bombs as part of his preparation for the end of the world. Later that month, a Missouri National Guard member was exposed for providing assault rifle training to a white supremacist group in Florida, who were preparing for a “race war.” More recently, a former U.S. Army serviceman (and a self-proclaimed neo-Nazi) killed five people at a Sikh temple in Wisconsin on Aug. 5, 2012. Less than two weeks later, a former Army soldier, who embraced sovereign citizen beliefs, is reportedly involved in the ambush attacks of four sheriff’s deputies in St. Johns Parish, La.

I don’t take lightly the subject of right-wing extremist recruitment and radicalization of U.S. military personnel. I was a civilian counterterrorism analyst at the Department of Army for eight years and was responsible for the U.S. Army’s force protection mission (a term used to describe protecting the Army from terrorist threats) within the United States for three of those years.

While employed in this capacity, I learned of a U.S. Army report, released in March 1996, that discussed the results of a confidential written survey of 17,080 soldiers regarding extremist activity in the Army. The survey was done in response to the murder of an interracial couple in Fayetteville, N.C., by three Army servicemen who openly embraced white supremacy. The killings were characterized in court proceedings as a right-of-passage into a neo-Nazi group that was solely composed of active-duty soldiers.  Survey results found that 3.5 percent of soldiers “had been approached to join an extremist organization since joining the Army.” Another 7.1 percent reported that they “knew another soldier who was probably a member of an extremist group.” It would be interesting to create a similar survey today and compare the results.

I knew that right-wing extremists were recruiting military personnel, exploiting firearms training programs on military installations (called civilian marksmanship programs) and stealing military weapons and equipment. There were many cases during the 1990s that substantiated this troubling reality. Past right-wing extremist targeting of military members for recruitment, particularly within the militia movement, was critical to white supremacists, sovereign citizens and the militia movements’ perceived “end times” preparation as well as their anticipated armed confrontations with law enforcement and other government officials. There is no doubt that recruiting military personnel, taking advantage of military training programs and acquiring military weaponry and other military equipment, such as night-vision goggles and body armor, had a direct impact on the lethal capabilities of violent right-wing extremists then. And, it still does now.

A major criticism of the U.S. Department of Homeland Security’s right-wing extremism report, dated April 7, 2009, referenced the section that concerned a small percentage of “disgruntled military veterans” being targeted for recruitment by right-wing extremists. Given the enormous size of our military forces, a small percentage of extremists could number several hundred to a few thousand. It only took one to detonate a large vehicle bomb resulting in 168 deaths and hundreds of injuries in Oklahoma City. As illustrated in the aforementioned list of recent incidents, extremist recruitment of military personnel is an undeniable fact. It is a sensitive subject that some military officials have downplayed and, at times, have failed to acknowledge.

In his letter to DHS Secretary Janet Napolitano, dated April 13, 2009, David K. Rehbein, national commander of the American Legion, stated that “the American Legion passed Resolution 407. It resolved, in part, ‘... we consider any individual, group of individuals or organizations, which creates, or fosters racial, religious or class strife among our people, or which takes into their own hands the enforcement of law, determination of guilt, or infliction of punishment, to be un-American, a menace to our liberties, and destructive to our fundamental law.’” Rehbein further stated in his letter to Napolitano that he believed the DHS report was incomplete and politically biased.

Given Rehbein’s statements, I was extremely surprised, and very disturbed, to later learn that some American Legion chapters were fostering the growth of radical right-wing extremists by permitting them to radicalize and recruit within their assembly halls. For example, in December 2010, the Republic of the united [sic] States, whose members the FBI considers “domestic terrorists,” held meetings at an American Legion building in Verde, Ariz. In January 2011, according to news reports, 13 members of a newly formed militia group used the American Legion hall in Hannibal, N.Y., to conduct meetings. In February 2011, a local ABC News affiliate reported that a sovereign citizen group called the “Republic of Florida” was using an American Legion hall in Rockledge, Fla., to elect their own governor and organize their own common law court.

It is surely hypocritical to accuse DHS of portraying U.S. war veterans as potential terrorists (a blatant mischaracterization of what was actually written in the report), yet encourage and permit the very radical ideologies that further right-wing extremism and domestic terrorist activity to flourish and grow by allowing them to use American veterans’ facilities.

On Nov. 27, 2009, the Department of Defense reportedly tightened its policy on armed forces personnel participation in hate groups [emphasis added]. It made no mention of other extremist causes such as the sovereign citizen and militia movements that have historically demonstrated a potential for violence and criminal acts.

The revised DOD policy supposedly closed a loophole in the DOD Regulation 1325.6 concerning participation in dissident and protest activity. The previous loophole described what constituted “active participation,” which was interpreted by many serving in the military as active membership. As a result, some military service members rationalized that online racist activity did not represent membership. The new revised policy prohibits military service members from publication of supremacist doctrines on websites, blogs or other forms of electronic communication using government computers. Ironically, the changes to the military’s policy were reportedly spurred by the 2009 shooting attack at Fort Hood, in which Army Maj. Nidal Malik Hassan killed 13 people and wounded 30 others.

I am honored and indebted to our nation’s military personnel for their selfless sacrifices while serving and protecting our national security and preserving our freedoms. I really enjoyed collaborating with many servicemen and women and training alongside them at several military schools, including the Military Intelligence Officer’s Basic Course.

Despite the recent changes in military policy with regard to hate groups, it is imperative that we do more to combat extremism within the military’s ranks. More should be done to educate military recruiters and other active-duty personnel on how to identify and report suspected extremist activity, as well as purge potential extremists from the recruiting pool. The American Legion certainly should denounce, scrutinize and further prohibit sovereign citizens and militia extremists from using their facilities. Military leadership should also consider broadening the scope of what constitutes extremist activity beyond hate groups and include sovereign citizen and militia activity, among other forms of anti-government extremism. Our military leadership has already demonstrated it has an interest in eradicating extremism. It must now follow through with its commitment by acknowledging this threat and, perhaps, expanding existing programs and regulations to encompass other forms of extremism beyond hate.