How mean is too mean?

Given his love for blunt talk that can verge on insults and abuse, it's a safe bet 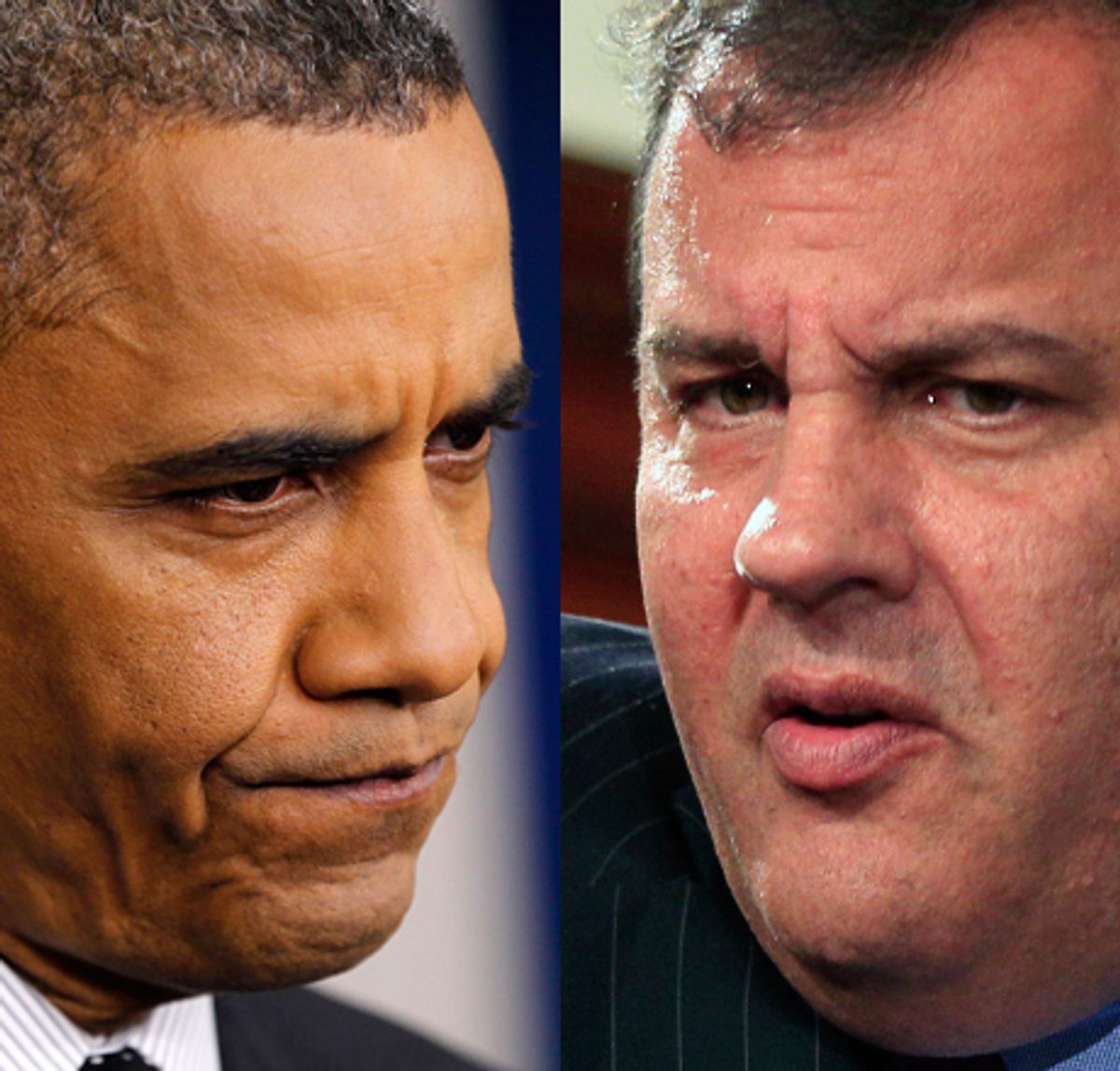 Four years ago today, our first black president accepted his party's nomination in Denver, Colo. Forty-nine years ago today, Rev. Martin Luther King Jr., labor leader A. Philip Randolph, and a mostly African-American but multiracial planning group convened the famous 1963 March on Washington, at which King delivered his legendary "I have a dream" speech.

That's the historic backdrop tonight, as the GOP kicks off the convention it hopes will lead to the defeat of our first black president in November. That Mitt Romney's campaign is resorting to racial appeals on welfare, Medicare and birtherism is undeniable; the question tonight is how hard will they hit Barack Obama on this historic anniversary.  It's also a moment when, with Hurricane Isaac menacing New Orleans, there's some danger in savaging the president the way some Republicans enjoy.

We know that Rick Santorum is going to hit Obama hard on welfare, repeating the lie that the waivers the president  granted "gutted" the work requirement that's tied to welfare. No matter how many fact-checkers say that claim isn't true, Romney and Co. keep making it. Santorum has already told us he doesn't mean for his welfare bashing to have a racial tinge because he's concerned about rising "dependency" among all Americans. We'll see.

Then there's New Jersey Gov. Chris Christie, the convention's keynote speaker. I've called him a "pit bull without lipstick" given his love for blunt talk that can verge on insults and abuse. He'd be a great pick to tear into the president, now that the ridiculous Donald Trump isn't showing up with his farcical video where he "fires" the president. But Christie is promising to take the high road and talk about what he's accomplished in New Jersey (where unemployment is still higher than the national average). He may have to. Republicans are divided over how hard to hit Obama, whose most important political advantage may be that people like him, and believe he cares about people like them (unlike Romney).

Also, with Hurricane Isaac on its way to New Orleans, the president is busy doing his job. It's a real challenge for Christie to figure out how mean is too mean when it comes to bashing the president.

Not only is it the anniversary of the March on Washington  and Obama's nomination, today is the official publication date of my book. (It's been available in stores for a while but this is the date when it's supposed to be out there far and wide.) I thought I'd observe these multiple occasions with an excerpt from the book, about the crucial, multiracial, black-labor alliance that led to the March on Washington. No one remembers that the march protested high unemployment among white workers, too, as you'll see below. Against a backdrop in which Democrats, including African-Americans, debate how hard to push our first black president to talk about race and poverty issues, it's worth remembering the delicate balancing act that went into deciding how hard to push John F. Kennedy 49 years ago.

Even the 1963 March on Washington, that victory for peaceful protest, featured infighting over whether to tolerate any criticism of the president. The administration tried to squelch the march from the beginning. Washington archbishop Patrick O’Boyle threatened to back out of delivering its invocation when he learned about one particularly fiery passage in Student Non-Violent Coordinating Committee (SNCC) leader John L. Lewis’s draft speech, vowing that black civil rights leaders would “pursue our own ‘scorched earth’ policy and burn Jim Crow to the ground—nonviolently.” An Irish Catholic leader blessing this outpouring of peaceful democratic protest would send a powerful message; O’Boyle backing out would have been a blow. Labor leaders and administration officials ultimately got Lewis to excise the controversial passage from his speech, and O'Boyle blessed the gathering.

In retrospect, what’s probably most surprising about the march is not the infighting, but that its leaders got beyond it. Only the decency and diplomacy of the black leaders kept it from falling apart. American Federation of Labor and Congress of Industrial Organizations (AFL-CIO) president George Meany flat-out refused to back the march, while liberals such as the United Auto Workers’ Walter Reuther gave time and money. Yet in exchange, labor demanded a say in how far the march would go in denouncing the administration’s civil rights sluggishness. Still, conservatives didn’t know enough about the new movement to figure out how drive a wedge between the forces of change – yet.

Few people today remember the extent to which the early civil rights movement came out of a movement for labor rights. King went down in history as the struggle’s prophetic leader, but A. Phillip Randolph, the cofounder of the influential Brotherhood of Sleeping Car Porters, stands next to King in the pantheon of early civil rights heroes. It was Randolph who threatened FDR with a wartime March on Washington in 1941 and Randolph who got Roosevelt to issue his executive order banning racial discrimination in the defense industry. Randolph and the Negro American Labor Council proposed the 1963 march and went to King, seeking his backing.

Looking at an old handbill advertising the 1963 march, I was struck by the multiracial, economic focus of its call to arms:

Millions of Negroes are denied freedom. . . .

Millions of citizens, black and white, are unemployed. . . .

It absolutely was about helping all of us, although many of us—particularly white working-class people—weren’t paying attention.

Its second two demands, after “Meaningful Civil Rights Laws,” were “Full and Fair Employment” and a “Massive Federal Works Program.” The latter would turn out to be the road not taken, in any of the major attempts to address poverty and exclusion (black or otherwise) during the next fifty years.

Lyndon Johnson would largely deliver on the first demand with the Civil Rights Act of 1964 and the Voting Rights Act of 1965, but his War on Poverty played at the margins of the labor market. At first, a strong and growing economy seemed to make concerns about jobs passé; unemployment was dropping. What few people noticed, though, was the decline in jobs for people without higher education, the result of automation and off-shoring. Johnson’s spending on the war would also make a big jobs initiative fiscally impossible.

It’s not that no one proposed one. Inside the administration, The Other America author Michael Harrington teamed up with another Irish Catholic, Daniel Patrick Moynihan, who’d gone to work in the Labor Department, to push a jobs thrust in the new poverty programs. “If there is any single dominant problem of poverty in the U.S., it is that of unemployment,” they wrote in a memo to Johnson’s labor secretary Willard Wirtz.

Harrington and Moynihan proposed a public works program, which Wirtz supported. But the Labor Department’s public works jobs proposals all carried price tags of $3 billion to $5 billion; Johnson couldn’t spend anything like that, with war spending climbing. In fact, the budget he submitted for 1965, the year he launched the War on Poverty, actually contained a slight cut to poverty programs. Instead, he chose Sargent Shriver’s approach—“a hand up, not a hand out”—with programs such as job training and education, legal services, and Head Start, intended to ready the poor to take advantage of opportunity, rather than creating opportunities for them. Harrington and Moynihan’s idea for a public works program was rejected; Harrington left his consultancy with the Labor Department; Moynihan stayed on.

Fatefully, the next year, Moynihan would seek to bolster his argument for an employment focus with an epic report, The Negro Family: The Case for National Action, that became known simply, and notoriously, as The Moynihan Report.

(Tough place to cut the excerpt, but I'll have more to say about Moynihan in the weeks to come.)