In his words, not his deeds, Reagan was an extremist 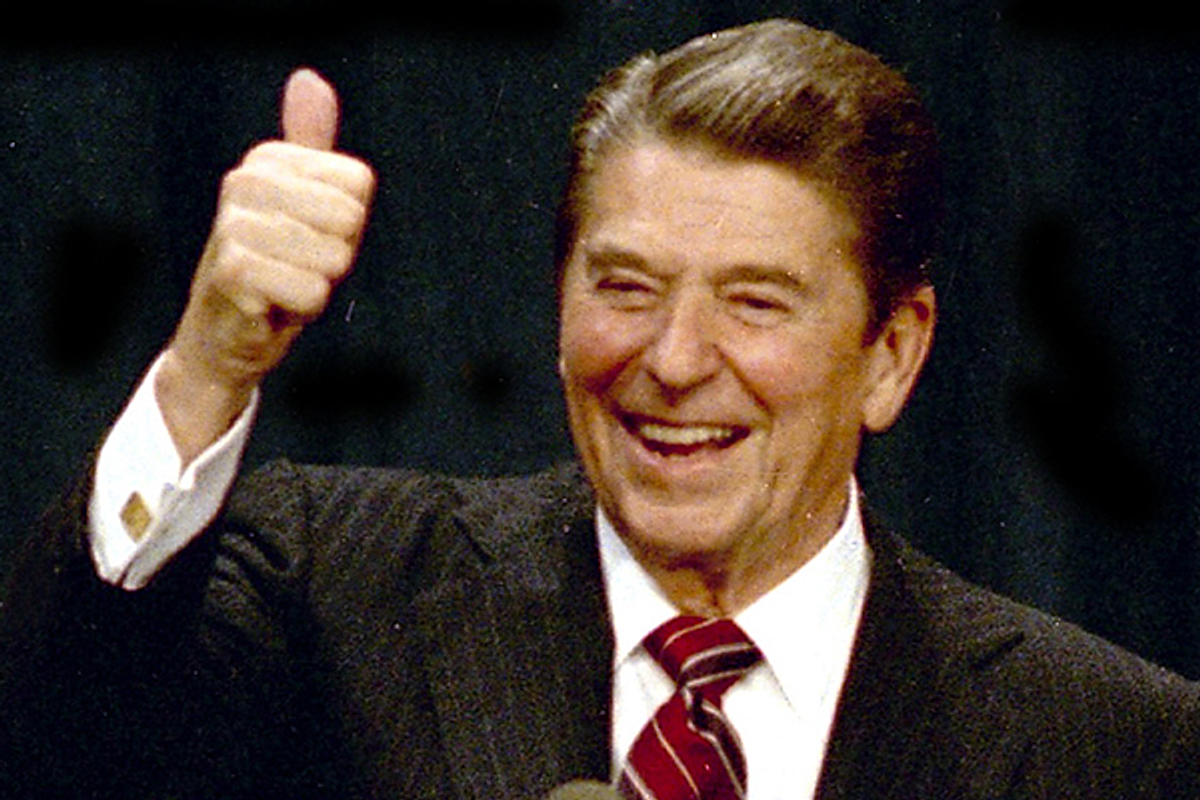 Is the Republican party really the party of Ronald Reagan?  Today’s radical right claims the two-term president as their inspiration.  In response, a cottage industry has arisen among pundits who point out that Reagan was far more moderate than his contemporary disciples.

After all, Reagan refused to try to privatize Social Security and Medicare, and proposed that Medicaid be completely federalized.  He negotiated the end of the Cold War with Mikhail Gorbachev, withdrew U.S. forces from Lebanon in 1983 after terrorists killed 241 U.S. Marines and preferred low-cost victories like the invasion of Grenada the same year.  And he used the power of the federal government to protect American companies such as the Harley-Davidson motorcycle company against unfair Japanese industrial practices.

But this picture of the reasonable Reagan is overdrawn.  What inspires today’s Tea Party conservatives is not Reagan’s moderate actions but his incendiary words.  The radicalization of American conservatism has many causes, the most important of which is the replacement of the Hamiltonian North by the Jeffersonian South as the heartland of the Republican Party, which, ironically, originated as the anti-Southern party in the 1850s.  At the same time, as the conservative philosopher Richard Weaver wrote, “ideas have consequences.”  And so do words.

Let’s begin with the absurdly apocalyptic tone of today’s conservatives.  The idea that a coming election will determine a utopian age of liberty or a millennium of darkness is pure Reaganism.  Here is Reagan in “A Time for Choosing,” the keynote address at the 1964 Republican convention that nominated Barry Goldwater for president and catapulted Reagan into the governorship of California and the presidency of the United States:

You and I have a rendezvous with destiny. We will preserve for our children this, the last best hope of man on earth, or we will sentence them to take the first step into a thousand years of darkness. If we fail, at least let our children and our children’s children say of us we justified our brief moment here. We did all that could be done.

The quoted paragraph is a clever pastiche taken of phrases adapted from Franklin Roosevelt—“a rendezvous with destiny”—and Abraham Lincoln—“last best hope of man on earth.”  But note the apocalyptic tone:  “We will preserve for our children this, the last best hope of man on earth, or we will sentence them to take the first step into a thousand years of darkness.”   Sarah Palin or Michelle Bachmann or Glenn Beck could not have put it better.

What exactly was going to plunge the United States and the world into a thousand years of darkness in 1964?  Abroad, while the Soviet Union would extend its military power further—in Indochina after the U.S. defeat, among other places—its over-burdened economy was already cracking, while the Sino-Soviet split had fragmented the communist bloc.  The U.S. and its allies in Europe and Asia had a near-monopoly of global industrial power.  At home, according to the Goldwater-Republican conservatives, American liberty was on the verge of being extinguished by tyrannical liberal programs, the majority of which helped the middle class, like Medicare.

If Ronald Reagan warned that the defeat of Barry Goldwater in 1964 might produce a thousand-year Dark Age, is it any wonder that his disciples today think and speak in similar millennial terms?

Indeed, every crackpot element of today’s radical Right can find inspiration in quotes from Reagan, which right-wing websites have collected for the benefit of catechumens of the conservative creed.

In office, Reagan may have done little to help the religious right, but in his rhetoric he was one of them:

If we ever forget that we are One Nation Under God, then we will be a nation gone under.

Within the covers of the Bible are all the answers for all the problems men face.

If today’s Republican party is harmed by controversies over its dogmatic insistence on outlawing abortion, Reagan is one of those who can be blamed:

We have the duty to protect the life of an unborn child.

Abortion is only advocated by persons who have themselves been born.

Are today’s conservatives increasingly anti-intellectual, refusing to acknowledge expertise and data-based argumentation in anything from science to economics?  They are only emulating their hero:

They say the world has become too complex for simple answers. They are wrong.

I say there are simple answers to many of our problems—simple but hard.

Let’s not forget the neoconservatives, who have their own cache of Reagan quotes. In 2002 George W. Bush’s speechwriter David Frum cleverly linked Bush to Reagan, evoking Reagan’s description of the USSR as an “evil empire” in a speech describing Iraq, Iran and North Korea as an “axis of evil.”  Note the allusion to America’s World War II enemies, the Axis powers.  It goes without saying that all of America’s enemies, even if they were former friends of the U.S. like Noriega and Saddam and Qadafi, are the new Hitlers.

While he sobered up once he was in the White House, in his statements as a conservative spokesman during the Vietnam War Reagan displayed the ignorance of the military and the casual bloodthirstiness that characterizes the bomb-‘em-now school of neocon pundits in our day like Charles Krauthammer:

It’s silly talking about how many years we will have to spend in the jungles of Vietnam when we could pave the whole country and put parking stripes on it and still be home by Christmas.

Today’s Right wants to cut already-low taxes on the rich further, following the huge give-aways to the plutocracy by Reagan and the second Bush, even if that increases the deficit.  George W. Bush’s vice-president Dick Cheney famously remarked, “Reagan taught us deficits don’t matter.”  Naturally there is a quote from the Reagan scriptures to support that dogma, too:

I’m not worried about the deficit. It is big enough to take care of itself.

Paul Ryan’s plan would cut Medicaid in half by 2040. Why not?  Ryan’s hero Reagan back in 1965 described Americans who depend on Medicaid as “a faceless mass, waiting for handouts.”

The contemporary conservatives who blame mass unemployment, not on a catastrophic collapse of demand in the aftermath of a global financial and real estate bubble, but on the laziness of the unemployed, can find support from Saint Ronald, who declared in 1966:  “Unemployment insurance is a pre-paid vacation for freeloaders.”

Do Tea Party conservatives routinely equate liberals with fascists?  So did their hero, quoted by Time in May 1976:  “Fascism was really the basis for the New Deal.” As president, Reagan repeated this libel, telling a PBS interviewer in 1981 that New Deal liberals “espoused” fascism.

The greatest damage done to American political culture by Reagan’s extremist rhetoric has been its effect on public perception of the legitimacy of government—any government, at any level, in any situation.  It is true that Reagan, after being elected as president, did not seriously try to repeal the New Deal.  It is also true that he reluctantly consented to tax increases when supply-side tax cuts blew a hole in the federal budget.  But his moderation in office had less effect on American society than the decades of vilification of the public sector that he pumped like toxic waste into public discourse.

Not only Americans in the Hamiltonian tradition of Washington, Lincoln and the two Roosevelts, but also enlightened Jeffersonians who recognize the legitimate role of the public sector should be appalled by the way that Reagan, year after year, decade after decade, used rhetoric to undermine the legitimacy of the very institution he sought to lead.

The nine most terrifying words in the English language are, ‘I’m from the government and I’m here to help.’

The best minds are not in government. If any were, business would hire them away.

One way to make sure crime doesn’t pay would be to let the government run it.

Government always finds a need for whatever money it gets.

Government does not solve problems; it subsidizes them.

Government is like a baby. An alimentary canal with a big appetite at one end and no sense of responsibility at the other.

No government ever voluntarily reduces itself in size. Government programs, once launched, never disappear. Actually, a government bureau is the nearest thing to eternal life we’ll ever see on this earth!

Government’s view of the economy could be summed up in a few short phrases: If it moves, tax it. If it keeps moving, regulate it. And if it stops moving, subsidize it.

Governments tend not to solve problems, only to rearrange them.

No American president or prominent public figure, including champions of small government like Thomas Jefferson and Andrew Jackson, has ever demonized government as consistently and crudely as Ronald Reagan did.  In three decades as a commentator, political candidate and politician, Reagan told the American people that government at all levels was a hostile alien force seeking only to steal their money and eradicate their freedom.

This was populist demagogy of the cheapest kind.  What is this external force that has occupied the United States, the malevolent, all-powerful  “government” that is the villain of Reagan’s rhetoric?  Haven’t the people themselves elected the politicians responsible for the three biggest federal programs—Social security, Medicare, and defense—all of which are popular with the electorate?  Didn’t they elect Reagan twice to the presidency?  Don’t public opinion polls show that many voters inconsistently want more spending and lower taxes at the same time?

Reagan won his popularity by encouraging Americans to think and feel like aggrieved victims, while absolving them from any responsibility for the modern government that they themselves voted for.  This point has been recognized by some conservatives who, even though they supported Reagan, are too intelligent to make a plaster saint of him.  Reviewing a book on Reagan by the late John Patrick Diggins in 2007, the conservative columnist George Will wrote:  “If the defining doctrine of the Republican Party is limited government, the party must move up from nostalgia and leaven its reverence for Reagan with respect for Madison. As Diggins says, Reaganism tells people comforting and flattering things that they want to hear; the Madisonian persuasion tells them sobering truths that they need to know.”

Reagan’s lasting legacy is not his moderate deeds, but his radical words.  In the twenty-first century, when citizens need to come together to rebuild the country on the basis of a constructive partnership of the private, public and nonprofit sectors, Ronald Reagan’s rhetoric is a threat to America’s future.