After a detente, tensions at the RNC erupted again when the Romney campaign tried a second time to change the rules 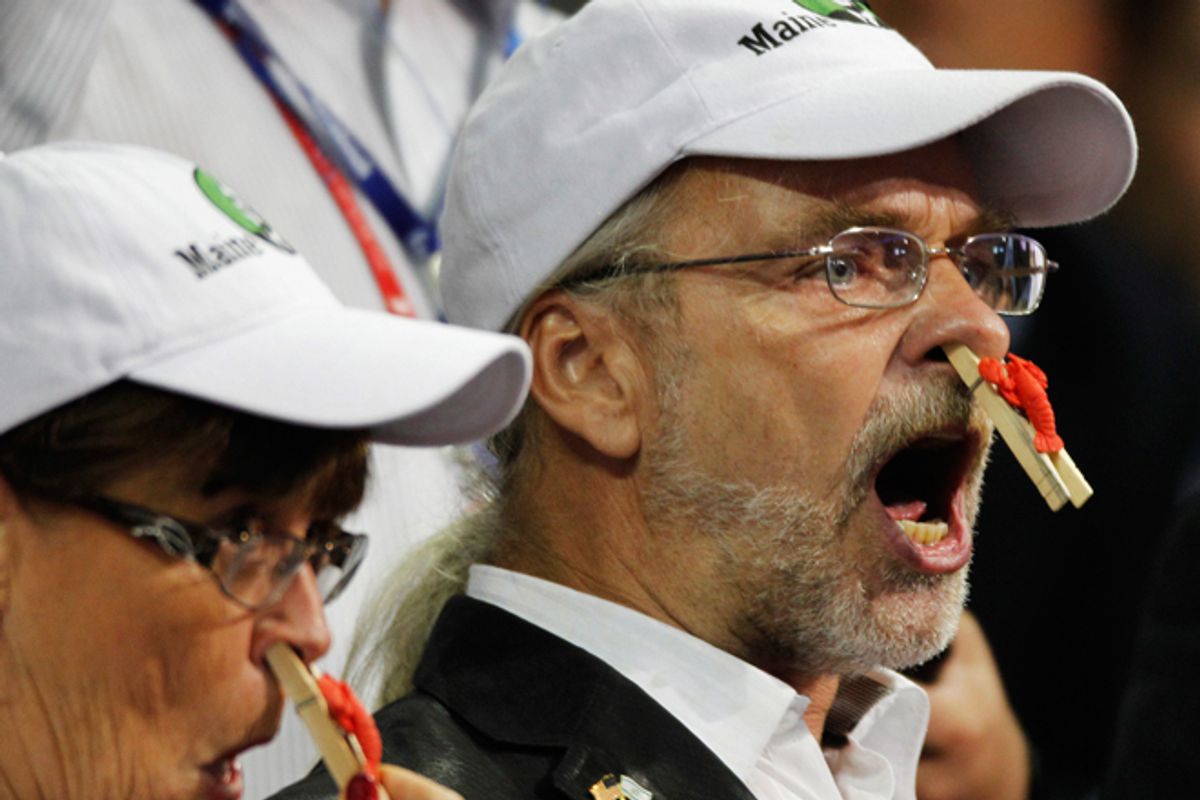 Delegates from Maine protest during the presentation of rules during the Republican National Convention in Tampa. (AP/Lynne Sladkey)
--

TAMPA -- "In fact, we just actually had a young guy from Massachusetts physically assault a little old lady from North Dakota trying to steal the minority report from her," said Dudley Brown, a Colorado delegate on the rules committee here at the Republican National Convention, indicating just how heated things have gotten over a rules dispute that threatens to upset the carefully choreographed event. "I had to step in and literally grab it out of his hands and sit him down forcefully. I told him, that's not what men do to women, especially little old ladies, from my state. I don't know what they do in Massachusetts," Dudley, the executive vice president of the National Association for Gun Rights, told Salon on the floor of the convention.

The dispute between grass-roots activists, led by supporters of Rep. Ron Paul, and the Romney campaign, appeared to be settled by this morning with a compromise on Rule 16, which would have let presidential campaigns disavow any delegates they did not want. But tensions were high again this afternoon as knots of delegates discussed Rule 12, which would allow the Republican National Committee to change party rules between conventions with a 75 percent vote, something not currently allowed. "We want to leave the rules the way they are right now ... Picking a fight right now is the dumbest thing the Mitt Romney campaign could have ever done. And conservative activists aren't going to take it," Dudley added.

A few feet over, two Ron Paul supporters from Washington, Scott Shock and Matthew Dubin, argued with fellow Washington delegate Diane Tebelius, who is on the Rules Committee and supports Rule 12. Both sides presented conflicting narratives as they spoke with Salon. Dubin complained that Rules Committee representatives from the Virginia delegation, which opposed Rule 12, missed the committee's meeting this afternoon. "When [their bus] arrived at the gates of the convention, it was rerouted and looped around downtown Tampa an additional 45 minutes, and as a result they missed the meeting," he said. "Seems like an interesting coincidence." Tebelius responded with smile, "The bus driver got a little bit lost."

"Diane, you were just telling me that you could be wrong," Shock said. She let out a loud, good-natured laugh. "Well, only God is right all the time! And I could always be wrong."

Over on the other side of the hall, some delegates from Texas, which led the charge against Rule 16, were still not happy. While some said they could live with Rule 12, others were not happy. "2010 scared the pants off of them," said delegate Jorge Murray, a Ron Paul supporter, of the anti-incumbent wave that swept the GOP two years ago. "So they're trying to make sure that doesn't happen again. But I don't think they realize how much support they're going to lose from the grass roots."

Adrian Murray, a Romney delegate from Texas, agreed. "We have a convention, we have it for a reason, and we shouldn't allow for the rules to be changed at any given time," he said. "Why start a controversy right on the very first day?"