Does TLC's new series "Abby & Brittany," about conjoined twins, keep from turning its subjects into a freak show? 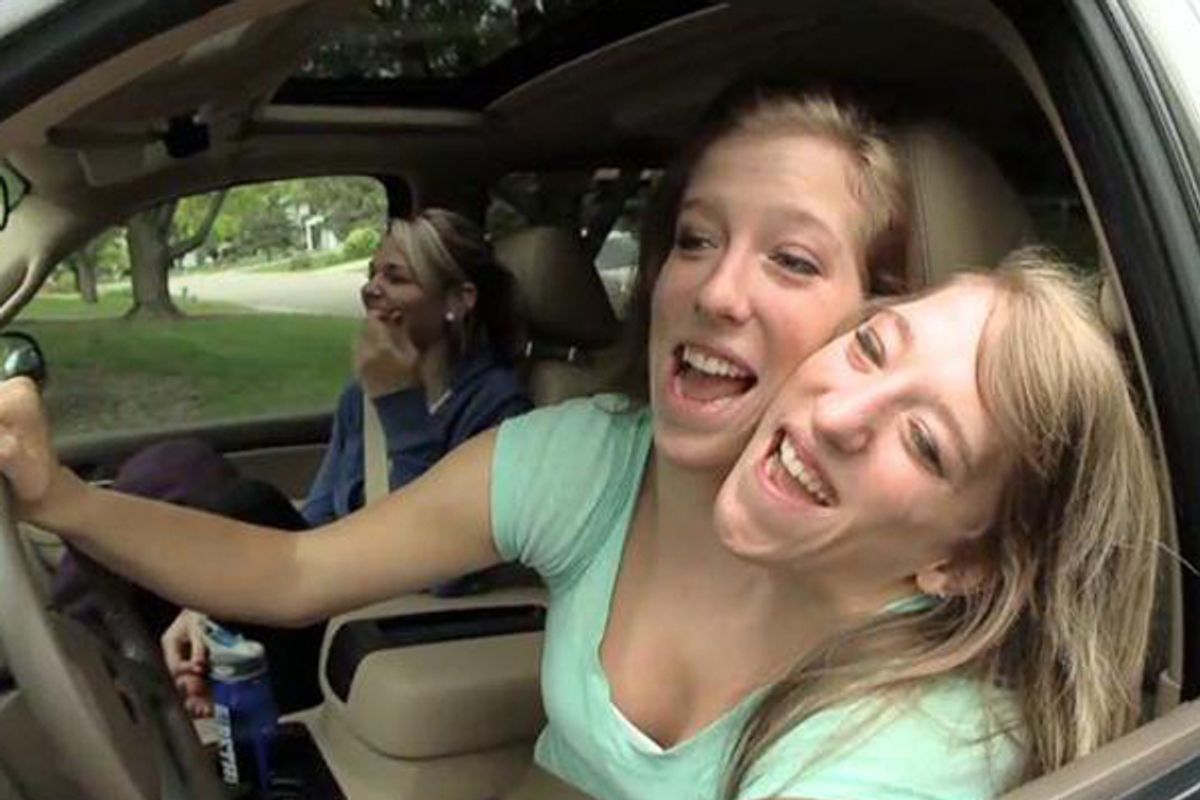 “Abby  & Brittany,” TLC’s new reality show about 22-year old conjoined twins, premiered Tuesday night. The Hensel twins are no strangers to reality TV. When they were 16, they participated in a documentary about their lives for the Learning Channel, TLC’s more serious-minded, pre-branded predecessor. This documentary — which you can see in full here — was a relatively sober endeavor, its gravity certified by a British narrator and a British medical expert who, in his refined, posh creepiness, seemed straight from Sherlock Holmes-villain central casting. (The girls are from Minnesota.)

The Hensel’s previous foray into having their lives taped was very much in the documentary/educational film tradition, a format that kept — and continues to keep — the “that’s exploitative!” alarm from sounding too loudly. But on TLC — a network that has willfully branded itself as a sort of Ripley’s Believe It or Not for American culture, a display space for hoarders, extreme couponers, outsize families, bridezillas, Honey Boo Boos and more —  the exploitation alarm’s default setting is “on blast.” Every show it airs opens up another front in the exploitation and voyeurism debates, and “Abby & Brittany” is no exception. Just how exploitative is this show, and just how much does it implicate the viewer who enjoys it?

With some of its series, TLC is willing to toy with this question, doing a little intentional exploiting and implicating itself. On “Here Comes Honey Boo Boo,” for example, the network takes a cheeky position toward the protagonists, occasionally laughing at them and their farts, their mud baths, their bug bites, their redneck ways. TLC does not have nearly so twisted a relationship with Abby and Brittany; it has a hagiographic one. “Abby & Brittany” is a series that Oprah’s OWN network should have fought tooth and nail for the right to air. It’s a series that positions its stars as two giggly, excitable, marshmallow-loving triumphs of the human spirit.

The focus of the series is the girls’ normality, despite the fact that they are the only two people in their particular circumstance on the whole planet. “This is the story of our normal, regular life,” they say in the show’s credits. “Well, our normal conjoined life.”  As the series begins, Abby — the louder, bossier one — and Brittany — the “weirder,” shyer, more adventurous one — are finishing up their last year of college at Bethel in Minnesota, not far from where they grew up. They are concerned about graduating and finding a job, excited for a new adventure, but sad to leave school. They live in a house with a gaggle of other women, they get coffee and have parties, go grocery shopping and try on clothes, disagree about what to wear, and finish each other's thoughts with astonishing regularity.

The show is so single-mindedly dedicated to demonstrating how regular the girls are that it eschews asking hard questions or showing uncomfortable moments. One of the twins’ friends tells the camera that the pair are constantly getting stared at and she is astounded by how well they stand up to that sort of scrutiny, but we never see such a moment and the Hensels are never asked to talk about it. In the previous documentary, when the two were 16, they spoke about how they wanted to be mothers one day. Their doctor thought it would be possible, though they have one reproductive tract between them. It might be invasive to ask, but it’s also hard not wonder: What are their romantic lives like now that they are 22 and college seniors?

In the absence of these sort of psychologically probing, if gauche lines of inquiry, Abby and Brittany’s physical movements are consistently the show’s most fascinating element. (Abby and Brittany are basically too well-adjusted and well-behaved to ever get a reality show, but for their conjoined-ness.) Despite each controlling a side of the body, they move in perfect coordination. It’s amazing to watch the ease with which they navigate the world, to see Brittany, but not Abby, get tickled when their left foot gets massaged, to hear Brittany explain her dislike of pedicures because “I’m kind of a my own space type of person, I don’t like to be touched that much” while sitting, forever, one inch away from another human. And yet by making their physicality, and not their psychology, the most interesting aspect of the show, “Abby & Brittany” inadvertently makes the girls’ bodily freakishness the focus in a way it clearly does not intend to.

Yet, still, the show is unrelentingly positive, and at times flatout heartwarming. In the documentary about them at 16, their mother explained just how protective their friends were, closing ranks whenever anyone would stare at them. In college, the twins seem to have duplicated this kind of sheltered social environment. Unlike so many TV shows — reality and otherwise — “Abby & Brittany” is a kind of soothing ode to the niceness of 20-year-olds, and especially of 20-year-old girls. The women who live with Abby and Brittany are normal in that explicitly Midwestern way, which is to say, normal to the point of notability, grounded, smiley, well-adjusted, well-behaved, just like Abby and Brittany. The roommates are a sort of Greek chorus, supplying the audience with the information it needs — about the girls’ physiological differences, how much tuition they pay (one and a half) and the differences in their personalities — and also expressing their endless, genuinely heartfelt admiration of the two and their astounding simpatico.

Toward the end of the earlier documentary, Abby and Brittany talked about how much they hated to be photographed and videotaped without their permission. Their mother said they felt like it was a “violation.” A trip to a baseball game was ruined when a rogue cameraman decided to train his camera on the then 16-year-olds.  Abby and Brittany are, in many ways, the least histrionic, nicest personalities you would ever expect to see on a reality TV show; that their hesitance about being on camera has all but evaporated and they've opted to go after their 15 minutes is just further evidence of how normal they really are.