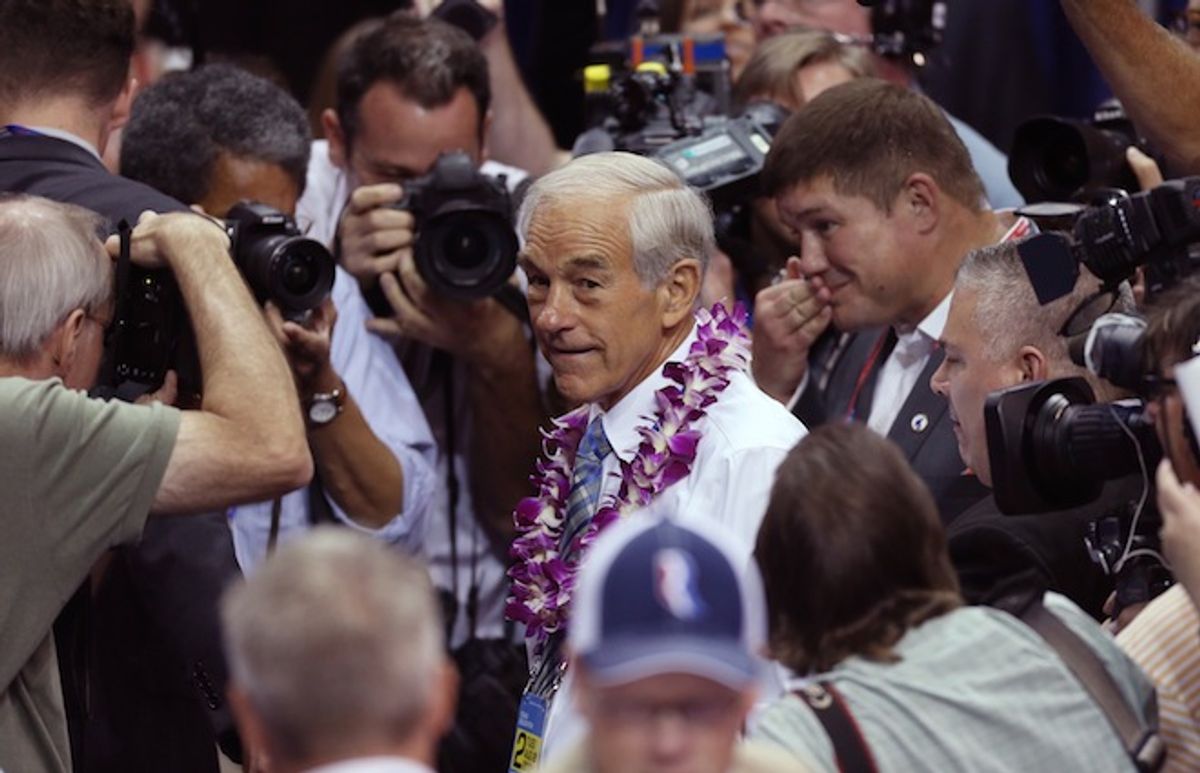 TAMPA -- Chaos and turmoil may have befallen the Ron Paul delegation -- members of which frantically scrambled about the Tampa convention floor Tuesday to exert their influence -- but much of the party establishment seemed unmoved by their plight. For example: I spotted Sen. John Thune of South Dakota striding around the exterior ring of the building, and asked if he felt the Paul People's grievances were legitimate. "Well, perhaps in their minds," the senator replied. "I think that there's a process, everyone followed it. Everyone did it according to the rules."

Virtually every Paul supporter I have encountered thus far would stridently disagree with Thune's assessment. Generally, they range from somewhere between perturbed to violently apoplectic over GOP insiders' skulduggery.

"This is just disgusting," said Ashley Ryan, the 21-year-old incoming national committeewoman for the Maine Republican Party, after RNC Chairman Reince Preibus announced the adoption by the Rules Committee of a provision that meant 10 Paul delegates from Ryan's state would not be seated. "This is a hostile takeover and an embarrassment to our party," she declared, visibly flustered. I stood among the Maine delegation as its members booed and hissed Preibus, forcing him to pause in his remarks; one Maine delegate frantically attempted to register an objection while Preibus announced the rule change, barking demands over the corded phone supplied to each state delegation that their microphone be turned on. But the mics stayed mute. "Point of order!" he screamed in vain. "You are required to seat the duly elected members of the Maine delegation! This includes eight U.S. Military veterans!"

Ari Fleischer, the former press secretary under George W. Bush, confidently dismissed all this consternation. "Ron Paul hit his high watermark in Iowa, and really after Iowa, just as four years before, his campaign went nowhere. What's the difference between Ron Paul and any other candidate who gave this a shot and didn't come in first?" he asked me. "His foreign policy scares me to death."

And what about the Paul People's claims that they followed the rules meticulously, agitating at state conventions and such, only to have the rules unceremoniously thrown out?

"If they're going to flout the rules, they probably will be able to get away with it," Fleischer said of the Republican National Committee. "That's the advantage of being the chairman."

Felicitously, I encountered Sen. Rand Paul on the convention floor and asked what he made of the Maine situation. "I haven't heard anything about that," Paul said, quite unconvincingly. For one thing, Rand had attended his father's Rally for Liberty at the University of Florida Sun Dome on Sunday, at which multiple speakers decried the RNC for sandbagging the Mainers. But of course Paul knew all about the situation; he was simply looking to avoid friction with the Romney People. For some time now, Paul the younger's willingness to appease the GOP establishment has been a source of angst among his father's core supporters.

On the convention floor this afternoon, rumors abounded that other states' delegations would stage a walkout in solidarity with their mistreated Maine colleagues, but this never came to pass. However, I observed members of the Kentucky, Colorado, Texas and other contingents angrily chanting in their defense: "Seat Maine now! Seat Maine now!" they cried. "As Maine goes! So goes the nation! As Maine goes! So goes the nation!"

Like Fleischer and Thune, Haley Barbour, the former RNC chairman and governor of Mississippi, asserted that all this fracas was much ado about nothing. "I don't know what they're talking about," he said of the Paul People's complaints.

"I don't know how they've been treated, to be honest with you," said Sen. Orrin Hatch of Utah, in a similar yet conciliatory vein. "But I think everyone should be treated fairly. Look, I like Ron Paul. And I love Rand Paul -- I think he's been an excellent addition to the Senate. And I like Ron -- you know, Ron came from Pittsburgh; I was born and raised in Pittsburgh. He's a gutsy guy. Whether you agree with him or not, he's a gutsy guy who stands up for what he believes in."

(I attempted to solicit Michele Bachmann's views on the Maine matter, but she refused to answer any questions, accusing me of being "rude" and eventually just ignoring my queries.)

Sen. Chuck Grassley of Iowa, everyone's favorite Twitter personality, assumed a slightly more charitable stance toward the larger Paul phenomenon. "I think that we oughta welcome new people," he said of the Paulites. "You understand, in my state in 1988, you would've been asking me the same questions, because the [Pat] Robertson People were so dominant? And we survived, didn't we? We got stronger! And don't you think we're going to survive the Paul People? In fact, the Paul People are going to strengthen our party. Of course they will."

But Ron Paul had been offered an opportunity to speak at the convention, I countered Grassley, if he agreed to fully endorse Romney and allow the RNC to vet his remarks. Paul declined. This does not exactly indicate a desire to make amends with the party apparatus, I suggested.

"Well, I think that shows the independence of a candidate for president," Grassley replied. "And obviously, people that are in the majority here have a right to make a decision they want to. But I think you're going to have this movement continue to move forward, and the Republican Party's going to be strengthened on it. The government, our democracy is going to be strengthened because of what the Paul People bring to it about the Constitution, following the Constitution, questioning monetary policy."

But what about foreign policy? Like Fleischer, Grassley has supported the Iraq War and Afghanistan escalation and every other overseas endeavor that Paul so loudly condemns. "I think that if that policy had been in place after World War II," Grassley said of Paul's non-interventionism, "the Soviets would have dominated all of Europe instead of just the Eastern half of Europe. I think that we've had 50 years of peace -- 60, 70 years of peace now, because America's been a leader in the world."

And then finally, there was Tony Perkins, in whom Ron Paul evidently has an unlikely ally. The Family Research Council president told me he was "a little concerned with how it looks like" the Paul People "weren't given the opportunity to state their objections."

"I've been a part of the minority in a legislative body," Perkins said. "And I think it's important that we give everybody the chance to compete. I'm glad they're here."