"Lawless" and the GOP's fever dream of the past 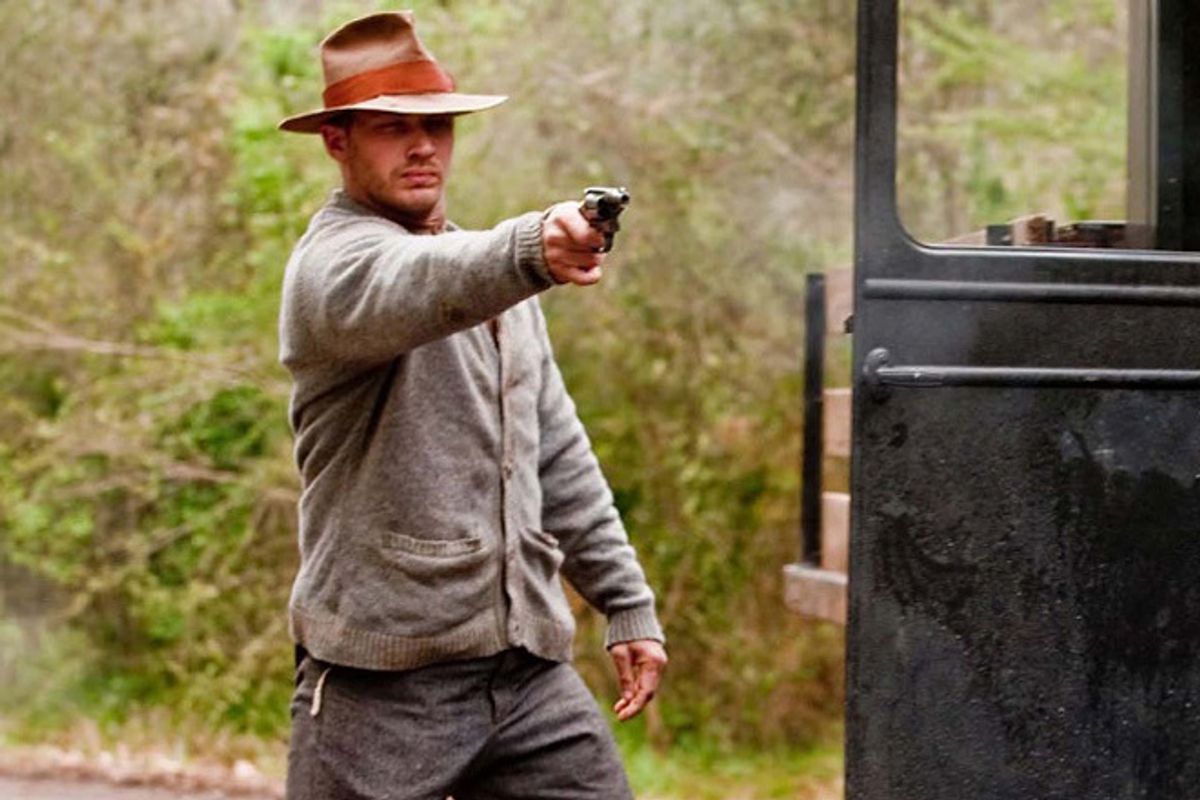 “Lawless” is a problem picture, as they say in Hollywood. It’s been through three titles during its lengthy post-production wait for distribution, and despite a cast loaded with talent and hotness (Tom Hardy, Shia LaBeouf, Jessica Chastain, Guy Pearce, Gary Oldman, Mia Wasikowska) is now being dumped on the last weekend of summer, on the presumption that it’s a flop. But much of the problem with this amped-up fable of Depression-era bootlegging in rural Virginia, I think, is the American problem with our own history.

It’s worth noting that this movie wasn’t made by Americans at all, but by a pair of Australians, director John Hillcoat and screenwriter, songwriter and legendary post-punk singer Nick Cave. (They also made “The Proposition,” a similar but more successful “Aussie western.”) Cave’s screenplay takes Matt Bondurant’s historical novel “The Wettest County in the World,” largely based on the exploits of Bondurant’s own grandfather and great-uncles, and treats it as a canvas for Cave’s obsessively Biblical or Faulknerian treatment of American themes. Elevating the story to a grotesque or mythic plane works well at some points and less well at others, but Hillcoat never firmly commits to either documentary-style realism or Coen brothers-style Grand Guignol, and tries to split the difference.

Still, despite an unfocused narrative quality and a distinct sense that the most interesting characters in and around the Bondurant clan – Hardy’s monosyllabic mountain man, Chastain’s runaway showgirl, Oldman’s Chicago mobster -- are sacrificed to the tedious central tale of LaBeouf’s naïve bootlegger hero, “Lawless” offers a compelling, gruesome and instructive time-travel exercise. I say instructive because the accidental confluence of “Lawless” and the Republican National Convention forced a realization upon me: The anarchic world of rural 1920s crime and corruption, even in this movie’s exaggerated form, represents the American past that the Republican right wing yearns for, whether they realize it or not.

I’m not claiming that Republicans support gangsterism -- well, except in its white-collar form – or that their professions of faith in law and order are insincere. I am saying that the Republican vision of the past, which is being endlessly promulgated in both overt and covert fashion by the image-makers behind the Romney-Ryan campaign, is hopelessly contradictory. Essentially, Republicans long for two completely different versions of the past, while declining to face the true consequences of either, let alone the fact that they’re completely incompatible with each other. Let’s call the first of these the Eisenhower past, and the second one – an aspect of which is seen in “Lawless” – the Calvin Coolidge past.

Ever since Ronald Reagan’s epoch-shaping 1980 campaign, Republicans have specifically appealed to the perceived harmony and homogeneity of the 1950s, when America’s white majority enjoyed a period of explosive prosperity and began moving en masse from the cities to the suburbs, and from the working class to the property-owning middle class. In 1980, most of the adult population could still remember the ‘50s, however dimly, whereas today they’ve become more of a hazy ideal: High-paying jobs, short hair, big houses and big cars, no visible black people except Chubby Checker and Little Richard. But all that growth in the Truman-Ike era did not simply emerge from “we built this” individual grit. Even if we set aside the fact that the economic benefits of the ‘50s were primarily directed at white heterosexual married men (a semi-acknowledged bonus, from the Republican point of view), the expansion of opportunity was driven by an extraordinary level of government intervention in every aspect of the economy, from highways to housing construction to higher education to food subsidies.

And here’s what today’s Republicans want to talk about least of all: Marginal income tax rates on the wealthiest one-fifth of the United States population stood at 91 percent from 1946 to 1964 (when tax reductions were first implemented under a Democratic president and congress). That is literally incredible from any point along the 2012 political spectrum; Barack Obama has never dared to imagine such a thing in his deepest Kenyan-socialist daydreams. (The Bush-era tax cuts, affecting incomes above $312,000, reduced the top rate from 39.6 percent to 35 percent.) At the time, Dwight Eisenhower appeared to be a mild-mannered paragon of patriotic, Main Street Americanism. Today he looks like Leon Trotsky armed with the flaming sword of St. Michael the Archangel.

In fairness, the hardcore budget-cutters and supply-siders in the Paul Ryan wing of the Republican Party avoid talking about the ‘50s, except perhaps in a purely sentimental vein of small-town, sock-hop nostalgia. (Ryan was not born until 1970, so that era marked his parents’ youth, not his own.) To the post-John Birch, Ayn Rand true believers (and Ryan is absolutely one of those, however much he may hum and cavil during the campaign season), Ike was a GOP traitor who consented to the vast expansion of the welfare state. When they’re being honest, they will admit that in an ideal world they’d like to roll away the entire bureaucratic apparatus created by FDR and the New Deal, in hopes of recreating a prelapsarian boom time, the Roaring ‘20s of Warren G. Harding and Calvin Coolidge and, yes, of "Lawless."

There’s way too much history and poli-sci here to summarize in one paragraph, and Coolidge was a complex figure thoroughly unlike anyone on today’s political scene, a New England reformer who combined liberal social views with small-government conservatism. But let’s put it this way: The laissez-faire, low-tax, budget-cutting economic policies of the Coolidge administration, coupled with its hands-off federalism, did indeed produce a period of ruthless expansion. It was a boom for the stock market, for businesses both legitimate and fraudulent, and for criminals of all stripes and at all levels, from the immigrant streets of Chicago to Wall Street. (Remember that in 1919 gangsters had successfully fixed the World Series, a fact those who bemoan the steroid-era corruption of baseball decline to mention.) It was a boom that widened the already immense gulf between rich and poor, creating the overnight wealth depicted so memorably by F. Scott Fitzgerald in “The Great Gatsby,” and a boom, needless to say, that ended with the greatest financial and economic crash in capitalist history.

The wide-open, ultraviolent atmosphere of Franklin County, Va., in the ‘20s, as imagined in “Lawless,” emerged partly from the disastrous social engineering of Prohibition. Just as important, it reflected an increasingly stratified and diverse society that had outgrown its agrarian-democratic roots but lacked any functioning social contract or safety net. The Bondurant bootlegging brothers played by Hardy, LaBeouf and Jason Clarke are the lone-wolf heroes of this story, fending off corrupt local cops, a vicious special deputy imported from Chicago (the mannered but memorable Guy Pearce) and the urban crime syndicates represented by Oldman’s Tommy-gun-toting mobster. I don’t believe that Cave and Hillcoat intend any sort of political message, but they’re accessing a profound American myth to which none of us are immune: the legend of the autonomous individual or clan who stands outside and against society, like Huckleberry Finn or John Wayne at the end of “Stagecoach.”

“Lawless” does bounce briefly off the questions of white supremacy and the subjugation of women, not that it's the job of storytellers to incorporate all possible questions of context. In the real Franklin County and many other places like it, the New Deal brought electrification, indoor plumbing and a hand up out of poverty for the region’s post-bootlegging population – and for ironic and tormented reasons, the descendants of that redeemed generation now vote for candidates who would eagerly take all that stuff back if they could. As for the contemporary Republican back-to-the-future vision, a fantastic blend of the unregulated, untaxed wildfire economy of the 1920s with the (supposedly) harmonious Wonder Bread society of the 1950s, well, nobody ever had that and nobody ever will. But I guess as a campaign theme it plays better than “Let’s get rid of the black guy!”