Race baiting at the RNC

It may be subtle, but the Romney campaign's message is tailored to its supporters' implicit racial biases 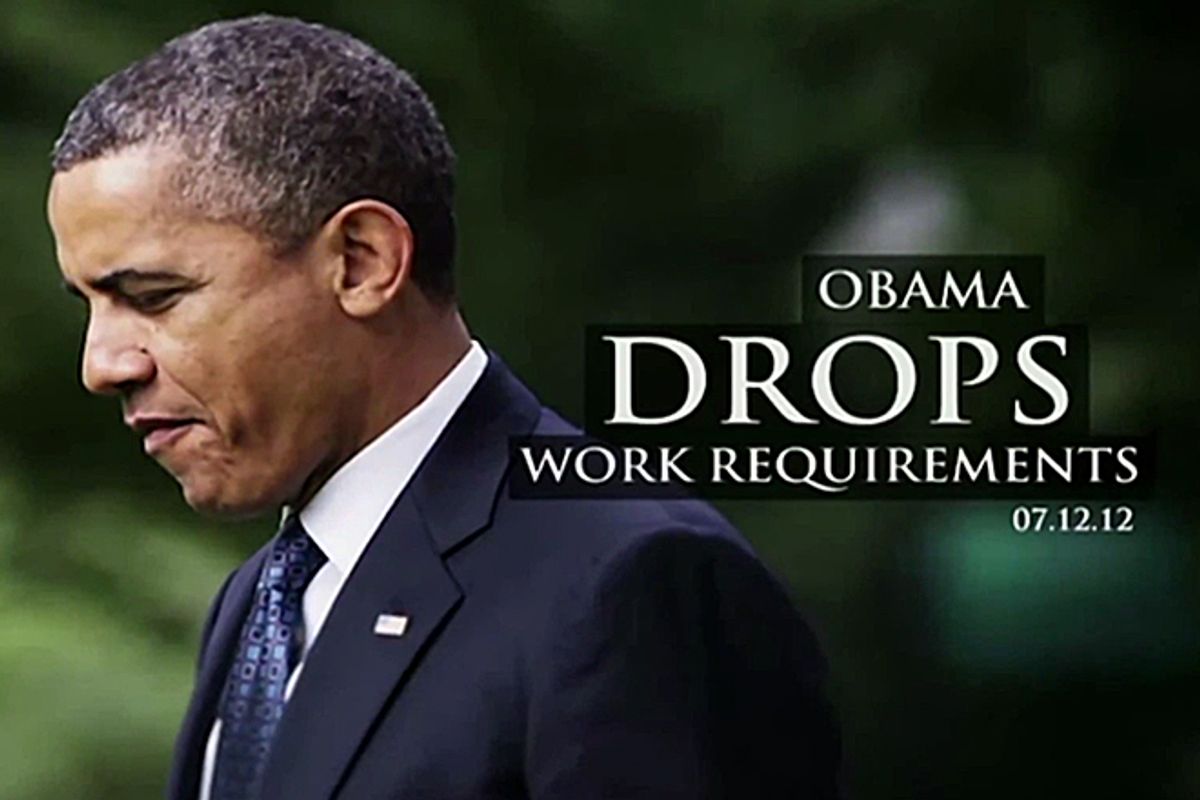 Race baiting in America today isn’t about explicit epithets and pointy white cloaks. It’s about subtle messages enmeshed with a not-so-subtle context. Falsely attacking President Obama’s welfare policies is bad enough. But combined with asserting “We did build that!” as their rallying cry, Mitt Romney and Republicans are crafting a narrative that not only preys on racial bias but inflames it.

Campaign narratives are basically stories, and stories are etched in context. When Ronald Reagan first introduced the “welfare queen” as a character in American politics, she was dripping with details — 80 different names, 30 addresses and a Cadillac. And she wasn’t from a mostly white city like Seattle. Reagan very deliberately cast her in south side of Chicago. Reagan didn’t have to say “welfare queens” are black. Voters knew just what he meant. Context matters.

Today, despite the fact that most people on welfare are white, most Americans think the majority of welfare recipients are black. So when Newt Gingrich calls President Obama the “food stamp president," the implicit story he’s telling is that our nation’s first black president is giving handouts to other black people. Just like Romney can deny his birth certificate joke was a bone tossed to birthers, that’s just how voters heard it. And in politics, as in civil rights law, unjust impact can trump even virtuous intent.

At the same time, studies show that most white people think black folks are less committed to hard work than they are.  So when Republicans use “We did build that!” as their new refrain, repeated in Romney and Ryan’s stump speeches and by almost every speaker at the RNC so far — sure, part if not most of the message is to perpetuate the myth of private sector bootstrapping and public sector irrelevance. But that’s not all. Stories have subplots, and this subplot is about race.

It is no coincidence that while every other Democratic president has been granted the presumption of good intent to grow the private sector and strengthen America generally, President Obama has been uniquely attacked as both un-American and a socialist.  Add to that the inescapable context of the president’s blackness and the welfare smears and the “We did build that!” statement is as much about implicitly praising the hardworking, mostly white Republican base as it is implicitly demeaning the lazy, socialist black president. How could Obama build anything when not only is he so busy destroying America but he hasn’t even had a real job with “actual responsibilities”? In the us-versus-them story line, Mitt Romney is grouped with hard work and success and Barack Obama is grouped with laziness and irresponsibility. In her RNC speech, Ann Romney took one subtle but pointed dig in saying that, if elected, her husband will “work harder” than President Obama.

Conservatives will defend this all as race-neutral politics and argue that those who accuse Republicans of race baiting are the real racists. But as the Atlantic’s Ta-Nehisi Coates brilliantly explains, while the president has gone to lengths to avoid race while in office, in a nation that only recently granted black people the right to vote, Obama’s tenure was inevitably viewed through a racial lens from the start. To argue otherwise would be like arguing that Hillary Clinton and Sarah Palin weren’t judged based on their gender, a claim I doubt would be made by anyone on the right still fuming about Bill Maher calling Palin a c*nt.

But there’s more than the weight of historical logic on the shoulders of the nation’s first black president to make the case for racial bias in our politics today. There’s evidence. Plenty of it. The most outrageous is a study in which researchers showed bipartisan subjects a picture of a Portuguese water dog. Half were told it was Teddy Kennedy’s dog, half were told it was Obama’s. Those with higher degrees of implicit racial bias were more likely to view the same dog less favorably if told it was President Obama’s. In other words, if implicit racial bias can be primed simply by showing a picture of the president’s dog, imagine how it can be primed by juxtaposing handouts to poor black folks with the hardworking independence of white Americans?

Stereotyping and scapegoating are time-proven techniques of right-wing organizing.  They provide easy targets and reinforce an us-them dichotomy.  They allow a movement to “hitchhike” on the fears and anxieties that are in the air at a particular historical moment. And they help a protest movement fix blame for social ills on easily understood targets and lure recruits with the claim that the movement is defending them from these enemies.  As a result, recruits both feel empowered and find an acceptable release for their anger.

Literally since the founding of our nation, black people have served the role of this “acceptable release” for the anger of poor and working-class white voters. And political elites have very deliberately exploited this dynamic.

The Washington Post’s Ezra Klein generously writes, “Romney’s welfare ads are not racist. But the evidence suggests that they work particularly well if the viewer is racist, or at least racially resentful." By the same token, repeatedly trumpeting “We did build that!” isn’t explicitly racist, but it certainly plays into an us-versus-them conceit on the part of a Republican Party that is mostly white and is fighting against a president who is mostly black. If “we” built it, “they” didn’t. “They” are just the lazy people getting handouts. When both Republican assertions about the president’s welfare policy and his “you didn’t build that” statement have been widely discredited as either taken out of context or flat-out lies, one has to assume Republicans wouldn’t keep using them — let alone make them the centerpiece of their campaign — if they didn’t serve such a powerful purpose.

No matter how much Republicans shout about the ills of racism, many continue to quietly whisper in codes that stir and spread racial anxiety. The story Republicans are telling voters is far too familiar, layered thick with winks and nods and the ugly context of America’s long, dark history of injustice. That is a context that real political leaders should be trying to erase, not exploit.