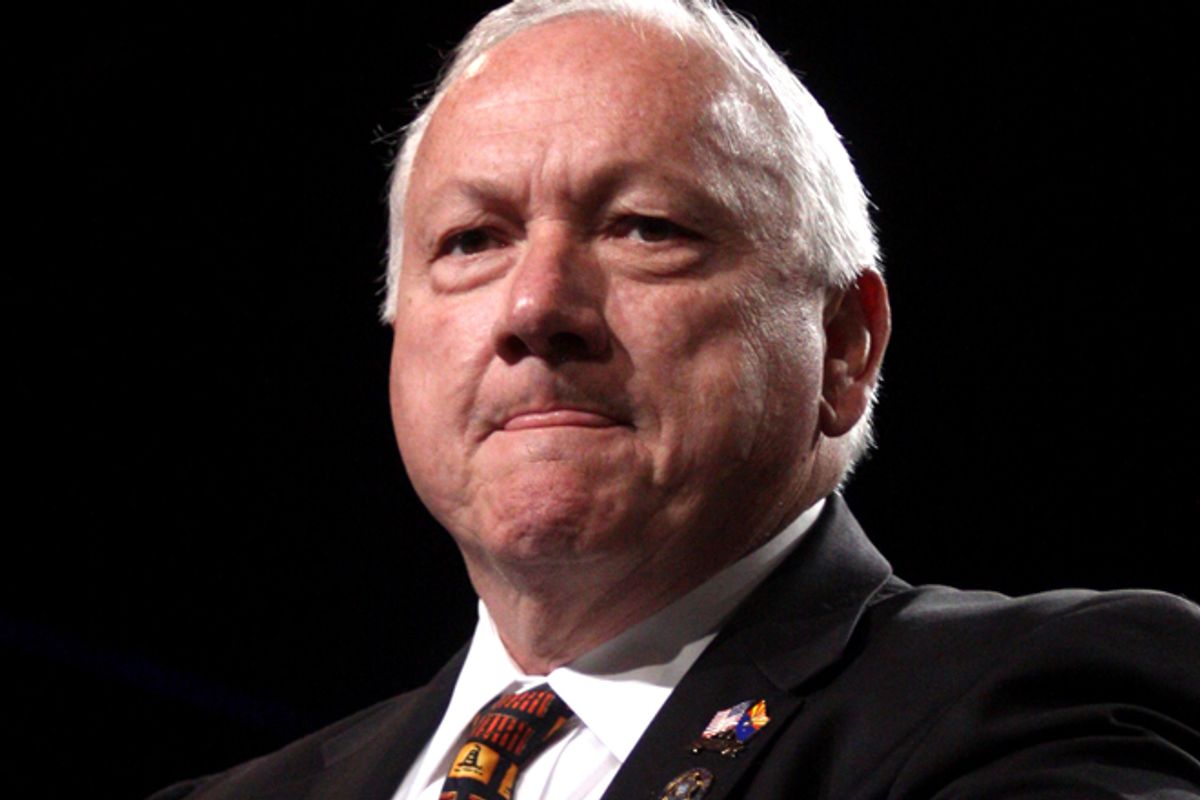 While Republican convention-goers fortify the ramparts of their Arizona-style immigration platform, SB 1070 standard-bearer Russell Pearce went down in an expected but still humiliating Republican primary defeat for a state senate seat last night.

Perhaps someone needs to inform the Republican convention: Russell Pearce has left the building.

"In less than one year, Russell Pearce has gone from being the most powerful politician in the state to being unemployed," said Randy Parraz, whose Citizens for a Better Arizona organization led last year's recall election of the former state senate president and played a key role in getting out voters in yesterday's primary election. "Not only did Pearce lose the historic recall election, he just lost the Republican primary by double digits. Russell Pearce's brand of extreme, divisive and hateful politics is finally over."

Pearce may have done his fair share of campaign blunders this time around, most notably his cringe-worthy comment on the lack of heroes at the recent Aurora shooting, but his self-proclaimed role as the "Tea Party President" and SB 1070 mastermind served as another referendum on the state's controversial immigration policy for Republican voters in arguably one of the most conservative legislative districts in the nation. In a nearly identical repeat of last year's recall voters' rejection of the state's punitive immigration approach, Pearce lost again by 12 percent, this time to SkyMall founder Bob Worsley.

"It will be easier to solve immigration based on a lot of things that he's done," Worsley told his supporters last night, noted New Times reporter Stephen Lemons. "Because we can now see that a state-enforcement-only law like [Senate Bill 1070] does not work."

Outside of Pearce's former district, however, Republican convention stalwarts led by SB 1070 architect and informal Romney adviser Kris Kobach defiantly went in the opposite direction last week, jamming through planks to "encourage" Arizona copycat efforts on state's right-oriented immigration law for "self-deportation," E-verify labor policies and the long-time dream of completing a double-layer wall along 700 miles of the US-Mexico border.

"I think it's an expression of support for Arizona-style laws," Kobach told The Hill last week.

But with Pearce's takedown, the question begs: Do even Arizona Republicans still support Pearce's Arizona-style laws?

In his endorsement of Presidential nominee Mitt Romney earlier this spring, Pearce boasted to a Washington Post reporter at a Tea Party event in Arizona that Romney's "immigration policy is identical to mine."

Whether that remains true or not for Romney or the Republican convention's pro-Arizona wing, Parraz and his bipartisan movement issued another message for the Republicans -- and Democrats -- including the embattled Maricopa County Sheriff Joe Arpaio, who will address a select crowd of convention attendees at a zoo in Tampa tomorrow, and faces a challenge in his own fall election campaign.

"If Russell Pearce can lose in this district of Mesa," Citizens co-founder Chad Snow, a Republican attorney in Phoenix, told a crowd of volunteers last night, "it doesn't look good for Joe Arpaio."

"We've been laughed at," Parraz told his electrified group. "We've been ridiculed.  We've been put off. But tonight we are victorious." Shifting to the fall elections, he added: "This is about us taking down Arpaio.

By the morning, in fact, the Citizens for a Better Arizona were already at work, launching a new drive on their Facebook page: "We have no time to rest, pause or hesitate. We need your time and money to help defeat Sheriff Arpaio. We need individuals we can hire NOW to join our team so we can contact thousands of voters at the door. We need thousands of volunteers to give 2, 3, 4 hours a week to contact voters. What are you willing to give to help us defeat Arpaio?"