The four biggest convention stories you won't hear about

Did you know your taxes are paying for the GOP's big party? The convention stories the media doesn't cover 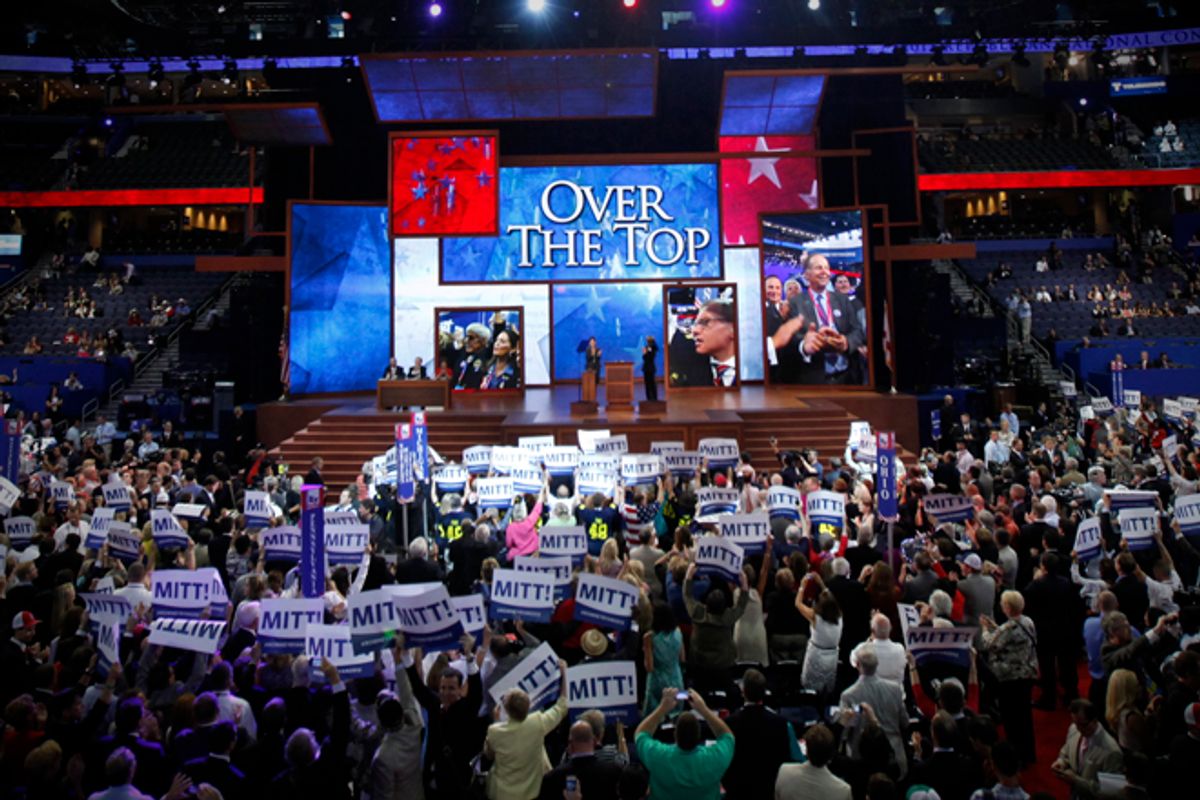 The quadrennial national political conventions are a lot of things -- expensive, maudlin, melodramatic, ostentatious. But one thing they are not is exciting. That's not surprising -- meticulously scripted infomercials almost never are, whether they are peddling the Flobie, the Snuggie or a plastic politician. Nonetheless, for all its political, ideological and content divisions, the fractured news media wasteland seems unified in its commitment to pretending that the Republican and Democratic conventions are must-cover events. Commingling notions of journalism's civic duty with the hyperbolic sports- and war-themed rhetoric that dominates today's election coverage, news outlets tell us that these are must-see extravaganzas -- when almost every fact says exactly the opposite.

The bad news is that because convention coverage is more pornographic than journalistic in nature, the most important of these stories are camouflaged. The good news, though, is that with a discerning eye, you can see these stories even from afar -- even through your non-HD television and your outdated Web browser. Here are four of the biggest of those stories and why they will almost certainly be ignored by the news (er, "news") media that's on location.

Yes, there has been plenty of news coverage of the latest tropical storm crimping the Republican National Convention in Tampa. Yes, it's inarguably true that we're getting disproportionately more coverage of that weather event because so much of the national media happens to be temporarily stationed in the storm surge. ("Let's never forget, we're the real story, not them!") And yes, as the father of a 21-month-old named Isaac, I'm gleefully clipping headlines seeming to suggest my son will single-handedly ruin Mitt Romney's expensive coming-out party.

But most of this coverage is Weather Channel-ish -- that is, raincoated reporters sloshing along wind-beaten beaches and smiley, buttoned-up Brick Tamlands pointing at maps. There's very little mention of the most obvious political context -- bizarre, since the national press corps is in Tampa for a political convention. And what, you ask, would an honest acknowledgment of political context invoke? Climate change, obviously.

Think about it: Since George H.W. Bush ratified the first major international accord recognizing climate change, pretending climate change doesn't exist and/or denying human beings' contribution to climate change has become Republican Party orthodoxy -- as reliable a position for a GOP politician as opposing abortion or supporting high-income tax cuts. Incredibly -- and predictably -- such denialism from the party of Big Oil has persisted and intensified even as scientific evidence proves it wrong, and even as the effects of climate change become ever-more catastrophic.

And yet, with climate change intensifying storms, and with one of those storms threatening the GOP convention, few reporters will dare mention the obvious symbolism, likely for fear of offending their Republican Party hosts.

2. Socialism for Objectivists: An anti-government, pro-free-market "We Built This!" celebration held in a publicly funded stadium

Hysterical jeremiads against "socialism" and for the "free market" are sure to pepper the Republican convention, if not from the dais then from the assembled rabble. Likewise, the collective assembly will no doubt hold up Huge Government Republican Paul Ryan as a supposed image of Randian small government conservatism -- despite his record to the contrary. Through it all, you can expect the assembled media to loyally echo the themes -- and barely notice that the paroxysm of anti-government hysteria is taking place inside a socialist enterprise.

That's right, as the Daily Dolt first noted, "The stadium where the GOP will be announcing 'We Built This!' was financed primarily by the government." Specifically, according to Marquette University's National Sports Law Institute, "The total budget for the project was $139 million, of which public money accounted for $86 million and team money accounted for $53 million."

In that sense, the Republican motto is technically correct. We did build this -- that is, not some single rugged individualist entrepreneur, but We the People. Too bad that easy-to-understand fact will be ignored.

3. Put it on Uncle Sam's tab: As politicians call for austerity, they are partying on the taxpayer's dime

As both Republican and Democratic politicians will tell you in their respective convention speeches, America faces a serious budget crisis. You'll hear cliches like "belt tightening" and "challenge every expense" to justify cuts to everything from Social Security to Medicare. You'll then hear reporters and pundits nod in loyal agreement, sugarcoating the proposals with yet more hackneyed adjectives like "tough" and "pragmatic" and "courageous." What you won't hear, of course, is that all this chest-thumping talk of austerity is emanating from two lavish, insanely expensive partisan events that you the taxpayer is being forced to finance.

This is no small bar tab. According to Forbes.com, it comes to a grotesque $87 million for both conventions. That includes $50 million for security costs, and another $18.3 million for political activities at each convention.

"If people knew that the money was being used to pay for liquor (and) parties ... they would not be too pleased," University of South Florida political expert Dr. Seth McKee told Tampa's local NBC affiliate. Those expenses include "more than $250,000 for social media services, $150,000 for website services, $215,000 for travel, and $42,000 for meetings/catering/beverages."

Your taxpayer dollars at work.

You don't have to rewatch the fifth season of "The Wire" to know that more and more media markets in America have become news deserts -- places where city council meetings go uncovered, corruption scandals goes unnoticed and huge social ills go unmentioned. Typically, this is explained as a crisis of journalism -- more specifically, a crisis of journalism resources. According to media executives' talking points, news organizations are losing audience share, which means advertisers won't pay as much for ads, which consequently reduces the revenues that fund real reporting.

Rooted in a self-reinforcing cycle, this tautology seems to make perfect sense. The "Dickensian aspect" of real news that affects real people's lives simply can't be covered because news outlets just don't have the resources! There's just one minor problem with this fable: It can't be true when the same allegedly cash-strapped media is deploying 15,000 journalists to the non-news events known as the Republican and Democratic conventions.

In a scathing post at his blog, CUNY professor Jeff Jarvis estimates that when accounting for travel and expenses, the same news media that pleads poverty is devoting roughly $60 million to cover the parties' glorified infomercials.

Looked at this way, the conventions definitively prove that America's media crisis has nothing to do with resources and everything to do with journalism -- or lack thereof. As evidenced by the army of media folk invading Tampa and Charlotte, news organizations have plenty of money -- they are just choosing to cover non-news events like scripted political conventions, and to ignore real news throughout America.

It's a blockbuster revelation -- one that, not surprisingly, will go unreported.