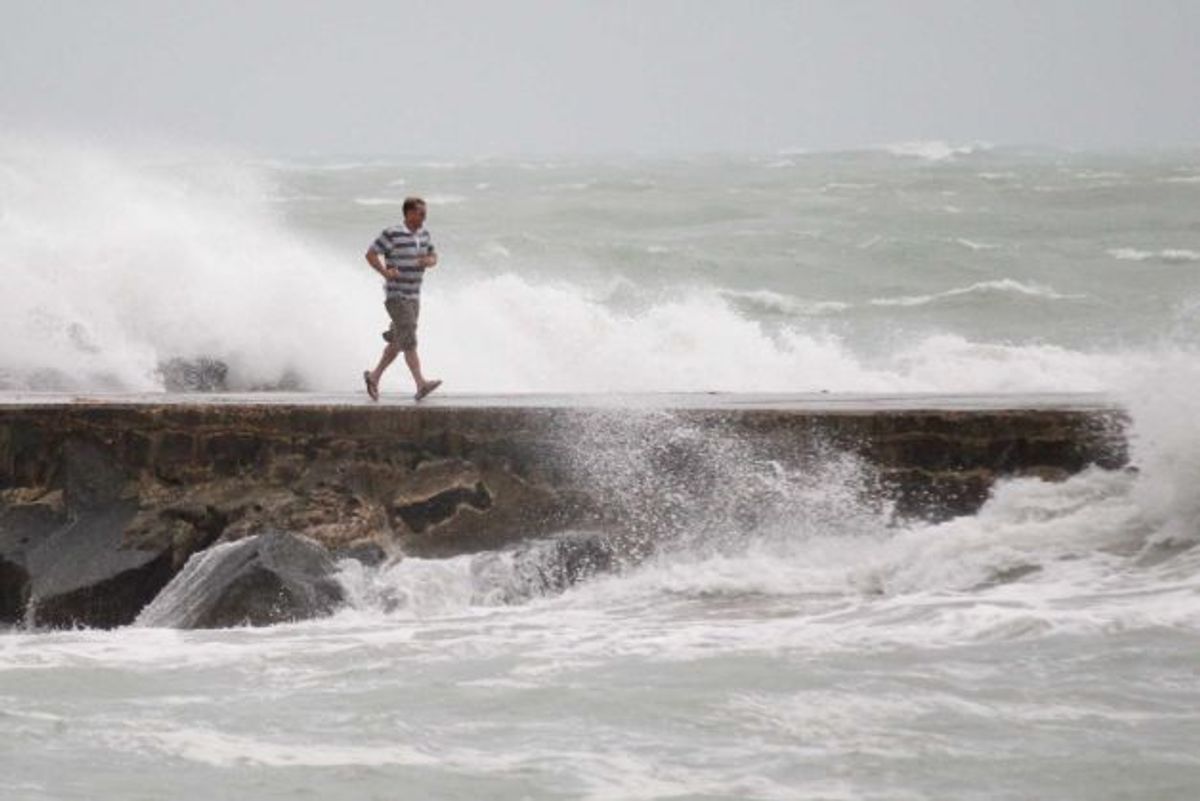 Hurricane Isaac has inconvenienced a lot of people.

Many thousands of Gulf Coast residents have boarded up windows and sought shelter inland. And many others are now facing the prospect of cleaning up and rebuilding flooded homes and businesses.

But the inconvenienced people we’ve been hearing about most are the pundits and politicians who gathered in Tampa this week for the Republican National Convention.

If you’re been paying much attention to the fairy tales of the far right in the past few years, it should come as no surprise that not everyone thinks it was merely a coincidence that the swirling mass of rain and wind known as Isaac appeared on the radar screen just in time to disrupt the GOP’s nominating party and the news coverage of it.

Rush Limbaugh says Obama may have had something to do with it.

The fabulists at Joseph Farah’s extreme-right WorldNetDaily (WND) think it was the wrath of God.

And a clutch of Web-based antigovernment paranoiacs are sure that “chemtrails” and “chembombs” affected the storm’s path.

Let’s start with Limbaugh. On Monday, the conservative radio host told his audience that the government’s weather scientists had colluded to mess with the GOP’s carefully choreographed show.

Not that Obama is controlling the storm per se – that’s a theory best left to the chemtrails crowd. But Limbaugh is sure thatsomething funky is going on. The storm “was being reported [on Sunday] in a way that resulted in the Republicans canceling their convention [Monday] when it’s nowhere near there. And that there were model runs Saturday night that showed Tampa was not gonna be hit at all, massive shift of models that was not reflected by the hurricane center for 12 hours.”

While most reasonable observers understand that storm track predictions are imperfect and that hurricanes can, and frequently do, change course, Limbaugh apparently believes the administration intentionally withheld potentially life-saving information for the purpose of fouling up the Tampa convention. Then, he pivoted and whined that the weather service had shifted its prediction and, rightly, predicted landfall in New Orleans.

“Again, I’m alleging no conspiracy,” Limbaugh said. “I don’t want anybody thinking I’m going somewhere with this. I’m just telling you what happened.”

Shifting our view to the mad propheteers at WorldNetDaily, we find that William Koenig, a “Bible prophecy expert,” believes the source of the storm is divine retribution. According to Koenig, Obama’s Middle East policy and GOP “platform committee decisions to support further division of the land of Israel to pave the way for the creation of a Palestinian state” have angered God, who sent the hurricane as punishment.

“What does this have to do with Bible prophecy?” WND asked in an article published Sunday. “It goes back to Genesis and God’s pledge to bless those who bless the children of Israel and curse those who curse them. It’s a prophecy that many Christians and Jews believe is behind the fall of all the world’s empires of the past. That is a prophecy that has seen every empire of the world come and go – yet Israel remains.”

WND and Limbaugh haven’t cornered the market on Isaac-related unhingedness. In another corner of the Internet, a coterie of conspiracists who peddle vague theories about malevolent plans to geoengineer the planet are saying that “chemtrails” and “chembombs” were deployed to change the storm’s course.

For those not familiar, the “chemtrails” conspiracy theory posits that the government uses contrails (the puffy strands of exhaust that trail behind jets) as a cover for releasing dangerous substances into the atmosphere.

According to a widely republished article that originated on a website called Chemtrails Planet, Isaac’s path was affected by “huge aerosols over the storm in conjunction with aerosols that had been deployed in advance of the arrival of the storm.” Chemtrails Planet goes on to suggest the perpetrator was Evergreen International Aviation, a private company with reported connections to the CIA.

Chemtrails Planet doesn’t bother to explain why the government would want to affect a hurricane’s course – but influential conspiracy theorist Alex Jones had one idea.

“We would be weird to not say it could be government-created as some type of disaster for the election,” Jones said in a video uploaded to YouTube Tuesday. “That’s not outside the realm of possibility.”

Yes, that would totally weird. To not say it.