In a world of phony customer reviews, sock-puppet snipers and other frauds, a simple graphic offers guidance 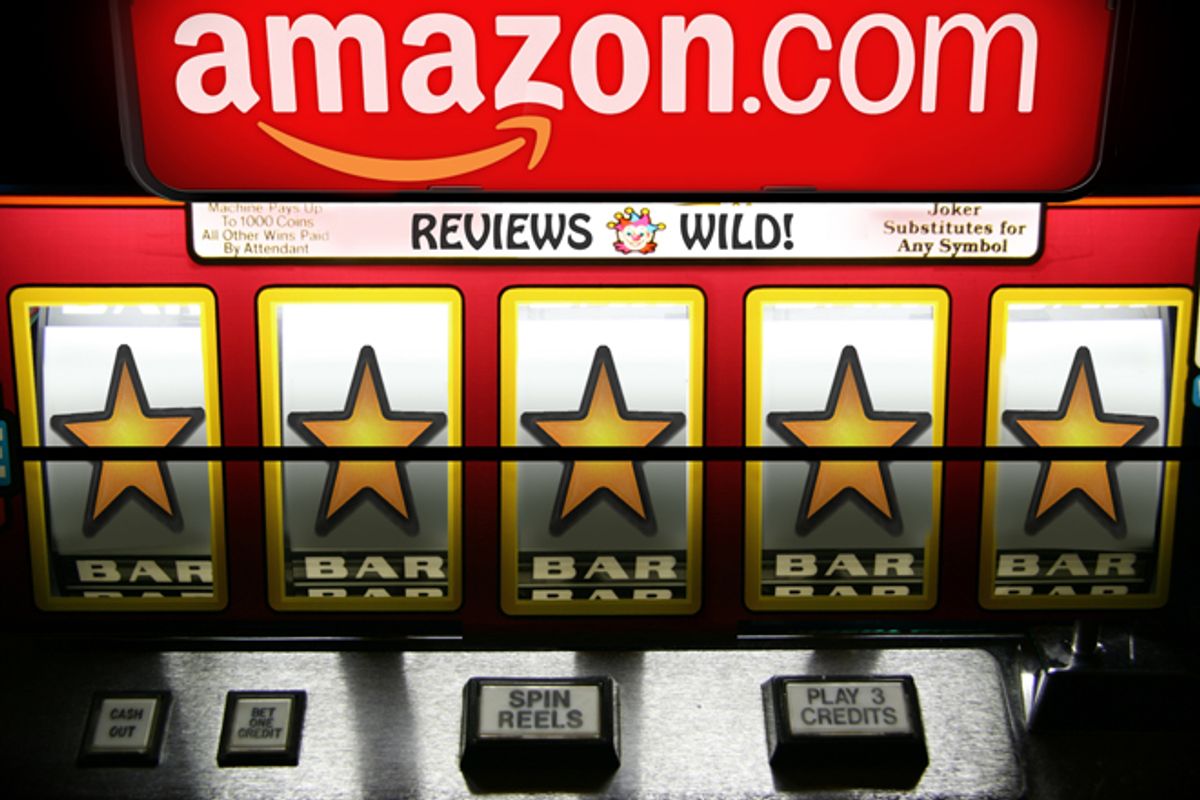 The fact that many authors pay services to write positive Amazon reader reviews of their books had been reported before, but a New York Times article about the practice last week finally registered with the general public. Perhaps it was the revelation that you can make more money selling bogus reviews of self-published books than you can by selling self-published books? It's much like the 1848 California Gold Rush, when the smart operators weren't out there panning for gold but purveying equipment, services and maps to the starry-eyed prospectors.

So should readers entirely discount Amazon reviews? Some already have, perceiving that the extreme responses (positive or negative) that motivate many volunteer reviewers don't offer a reliable sense of a book's merits. Anyone who knows an author (which, in this era of self-publishing, is pretty much everyone) has been hit up to praise their friend's book on the site. Then there are the news stories about authors who adopt sock-puppet identities to write nasty pans of books by writers they regard as rivals.

We've all stumbled across articulate, thorough book reviews on Amazon, but for every one of those there seem to be dozens of others that, even when apparently sincere, are utterly un-illuminating. Why does someone even bother to tell the world "I just couldn't get into it" -- probably the most banal and uninformative phrase in the amateur reviewer's lexicon? Still others have weird agendas, subjecting fictional characters to absurdly rigorous morality tests or launching into irrelevant political diatribes. And then there are vast hordes who simply don't get it, whatever "it" happens to be, and just want to vent. They, at least, supply hours of amusement with their one-star reviews for venerable classics and other works that have zoomed right over their heads.

Where reader reviews can offer some guidance is in aggregate. A graphic recently posted to the anonymous service Imagursuggested looking at the shape of the small bar graph at the top of the reader review section on a book's Amazon page. The skeptic responsible for this image starts with the arguable assumption that most five-star reviews are fixed in some way -- either paid for or submitted by the author's friends and family. Even with this caveat, s/he considers a top-heavy bar graph a good sign, provided the one-star reviews are few. A thin slice of four- and five-star reviews perched over larger slabs of one-, two- and three-star reviews suggests a mediocre book.

The configuration to be avoided at all cost, the graphic asserts ("Beware this shape!"), is a curve: a long five-star bar, with the four- and three-star ratings tapering off and then a swell of two- and one-star ratings. As one Imagur commenter noted, this form resembles the silhouette of a perky human breast. The commenter declines to associate this pleasing shape with the evils of crappy books pumped up by phony recommendations, but anyone able to temporarily set aside their mammophilia may find it a useful mnemonic: the Amazon Breast Curve.

The lively discussion of the graphic on Reddit reveals the wide array of strategies people use to evaluate reader reviews. As someone who usually learns about new books before they're published, I rarely rely on Amazon, but several years ago, another publication asked me to write about the vogue for vampire books. Knowing little about the genre, and unable to find a trustworthy review publication, I resorted to parsing the customer ratings.

A high average rating, I found, was never sufficient to recommend a book; unless there is also a critical mass of reviews, the average can be too easily skewed by the gushings of outliers (or ringers, I now realize). Yet a ton of reviews with a high average rating usually also failed to point me to decent authors and series. At a certain volume, the lowest common denominator kicks in. Believe me, anyone who thinks "Fifty Shades of Grey" is badly written has not delved into some of the more popular paperback vampire romances.

Speaking of that erotica phenomenon, "Fifty Shades" provides a case in point. The book has almost 1,900 reader reviews with an average rating of four stars. The bar graph shows 1169 five-star reviews and 255 one-stars. Many of the lower ratings come from readers who profess to have read the book only to see what all the fuss was about. So the graph is accurate, if you know how to read it: "Fifty Shades of Grey" is indeed a novel that a large number of people love and a smaller but very vocal number of people revile as subliterary. Still, the negative reviews aren't numerous enough to configure the book's bar graph into the dreaded Amazon Breast Curve. This is perhaps only just, because however little I might think of it, many, many readers adore "Fifty Shades of Grey."

As for actually reading the reviews themselves, some browsers consider only the one-stars, others sample a review from each rating level and still others only look at reviews that have been voted helpful by other readers. There are also those who read in the middle ratings because they assume that only ulterior motives or sheer cussedness would provoke a reviewer to either of the extremes.

For myself, while I rarely use Amazon reviews to decide what to read, a survey of some of my favorite recent novels suggest that the ideal configuration for my taste is a graph in which all five bars are of about the same length. Take "Wolf Hall" by Hilary Mantel. The graph of that novel's reader reviews does approximate the Amazon Breast Curve, albeit a somewhat flat-chested version. The book has garnered 216 five-star reviews and 98 one-stars. Reader reviewers who disliked it complain that Mantel "goes on and on and on, hinting, teasing, and suggesting without really making anything clear to the reader" and that the novel is "very poorly constructed, difficult to follow and extremely confusing."

The latter review prompted an array of responses, from a person who avoids any book whose one-star ratings amount to more than 10 percent of the five-stars, to an eloquent defender of fiction that offers "ambiguity, abrupt transitions and irregular chronology, and other narrative or literary devices." I'll have what he's having; for me, nothing stomps the life out of a novel more thoroughly than authorial hand-holding and on-the-nose dispatches explaining exactly what's going on and how you should feel about it. Likewise, my interest in a novel is always piqued when I hear the namby-pamby objection that its characters are "unlikable."

It's unlikely, however, that Mantel or her publisher had to pay anyone to supply her novel's Amazon page with five-star reader reviews; "Wolf Hall" did, after all, win the Booker Prize, a pretty good indication that a lot of people genuinely liked it. It's the lesser-known titles, self-published and otherwise, that arrive bearing a disproportionate number of generic-sounding raves that will be arousing suspicion from now on. Salon readers, how do you navigate the uncertain terrain of online consumer reviews? Please share your tips in the comments threads.