An inside look at the country's burgeoning American football culture 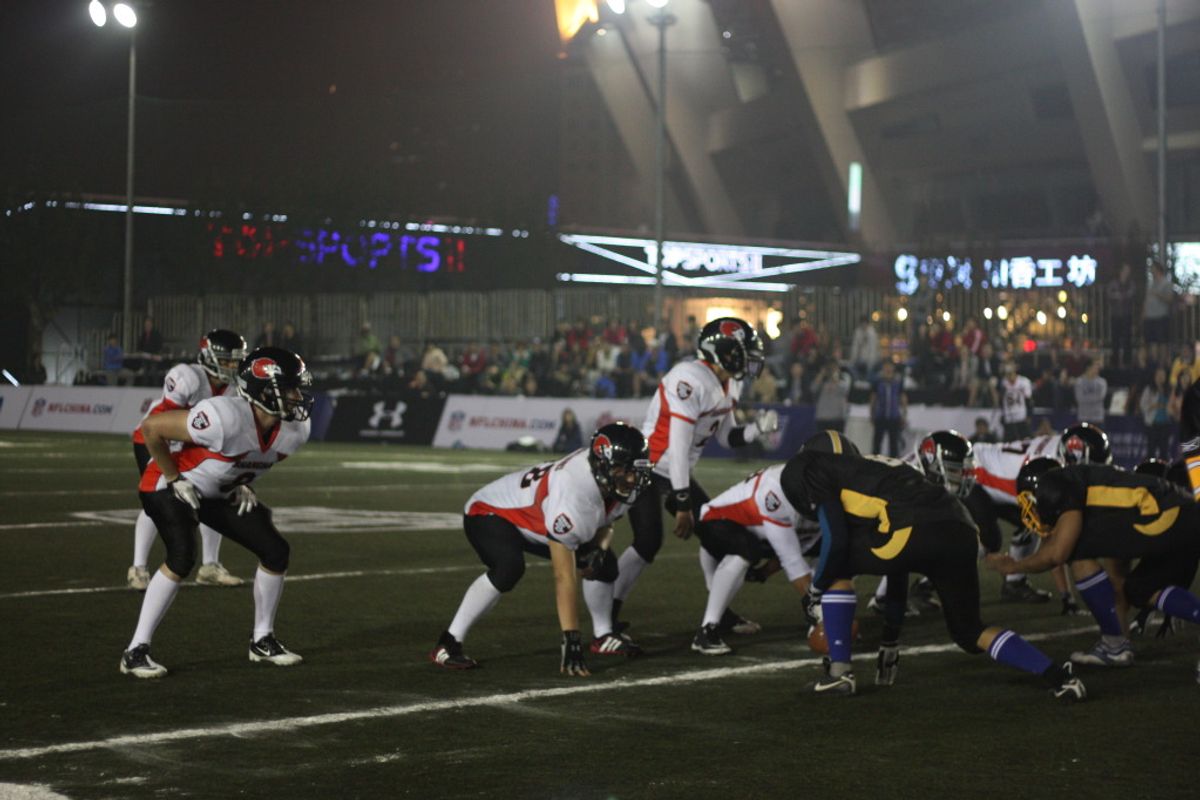 Sometime in mid-May this year, with the heat starting to intensify as the Shanghainese summer began to take hold, a little bit of history was made as a small but curious crowd of mostly high school students gathered to watch two teams play a sport none of them have ever seen played live before.

In Mandarin, it’s called gǎnlǎnqiú (literally, ‘olive ball’) but back in the West, it's better known as American football and what had just taken place on the grounds of the Shanghai High School was its team’s inaugural fixture.

A relatively error strewn game of flag football between the high school team and their teachers might not have been pleasing to the eye but it is symbolic of the growth of the sport within China. The school’s football programme is almost certainly the first of its kind in a Chinese-run school and only came about after students hassled a couple of American teachers into coaching them.

Effectively self-funded by the students (they paid for their own customised kits and equipment), the fledgling program is one of many examples of young Chinese men latching on to a sport they can only find through grainy viral feeds on the internet.

Indeed, further to the north of Shanghai, another group of men are going through their drills and practicing their five-step drops on a university playing field.

Like the high school students, these players found each other through their curiosity for playing football. What started as a handful of locals and ex-pats playing touch football in 2008 has now become the Shanghai Nighthawks, a team with over fifty players on its roster- 60% of that number being Chinese.

“I watched NFL games and fell in love with the passion. I just really wanted to play ball,” explains Barron Ng, a Nighthawks linebacker who’s been playing football since 2007. Like Ng, starting left tackle Steve Wu was also drawn to the sport’s intensity; “it’s a game of team work and effort but it is a lot different playing compared to watching- you need to understand the rules and the culture”.

In a country where basketball is still king, Chinese sports don’t have the violence and physicality of football, meaning neither player knew what to expect the first time they had to throw themselves into a tackle. “The first hit was a new experience,” notes Wu with a wince.

Yet once the local recruits become accustomed to the ferocious give-and-take of the game, their enthusiasm takes over, despite some limitations in the team’s structure- something Ng is pretty open about. “We don’t really have a head coach so all we can do is watch game film and YouTube clips- we try our best to study by ourselves, learn from our mistakes and improve on a weekly basis in practice”.

Practice is one thing but what is continuing to fuel the underground popularity of football within China are the opportunities to play in fully officiated, sixty-minute games against one of a growing number of teams. Shanghai already has a second side, the Warriors, whilst the Beijing Guardians, Xi’an Originals, Duhui Beserkers and the Hong Kong Hogs are also spoiling for a fight.

The blossoming of grassroots football within the country is certainly encouraging but if the sport was to really force itself into the mainstream, it would need a Chinese born player to crack an NFL roster.

Enter Long Ding, a powerfully built kicker from Western China, who as recently as last month was fighting for a job with the Jacksonville Jaguars at their training camp.

Spotted in 2007 at an NFL kicking camp in his home city of Qingdao, Long’s journey has certainly been unusual. Having impressed scouts with his booming kicks that Long attributes to several years playing rugby (itself an equally obscure sport in China), the kicker earned himself a spot on a football exchange program and a relocation to Franklin, in rural Massachusetts.

His first few months in New England were rough as he arrived not being able to speak any English. Two years later, having conquered the language barrier and fine-tuning his kicking, Long then moved on to Norfolk University, a Division III school in Vermont, where he was the Eastern Collegiate Football Conference special teams player of the year for two consecutive seasons.

Despite going undrafted after graduating this year, interest in the kicker was still high and although he didn’t get offered a roster spot with Jacksonville, China’s first potential NFL player remains upbeat. “That try-out was a great experience. Everyone there is a top player from college and deserves to be there” notes Long, “I made friends, met good coaches. I was lucky I had a trial- not a lot of people get that opportunity”.

Having reportedly impressed in Jacksonville, Long represents the best chance of seeing a native Chinese NFL player in the near future, although no one can be sure about how long it will be before further players from China come looking for work on the gridiron.

In the eyes of amateurs like Ng, those reinforcements are not too far away. “It's coming real soon- within a decade I think- probably starting with a skill position like a receiver or a running back because honesty speaking, we lack size”.

However, having witnessed the harsh realities of football from the inside, Long is far more pragmatic. “It really depends on the coaching and if people are watching the NFL on TV. They also need to have the equipment and to realise how the game is played and understand the strategies. It could be a long time”.

Regardless of who turns out to be right, the rapid growth of football in China means that its popularity should at least lay the groundwork for more players like Long to be discovered and get their own shot at NFL glory.

The days of a Chinese player becoming a Super Bowl MVP are still a long way away, but should it ever happen, pioneers like the high school kids that funded their own football program or a converted rugby player turned kicker can look back and be proud of the legacy they created.