Like border walls and biblical literalism, the gold standard falsely promises certainty in the midst of chaos 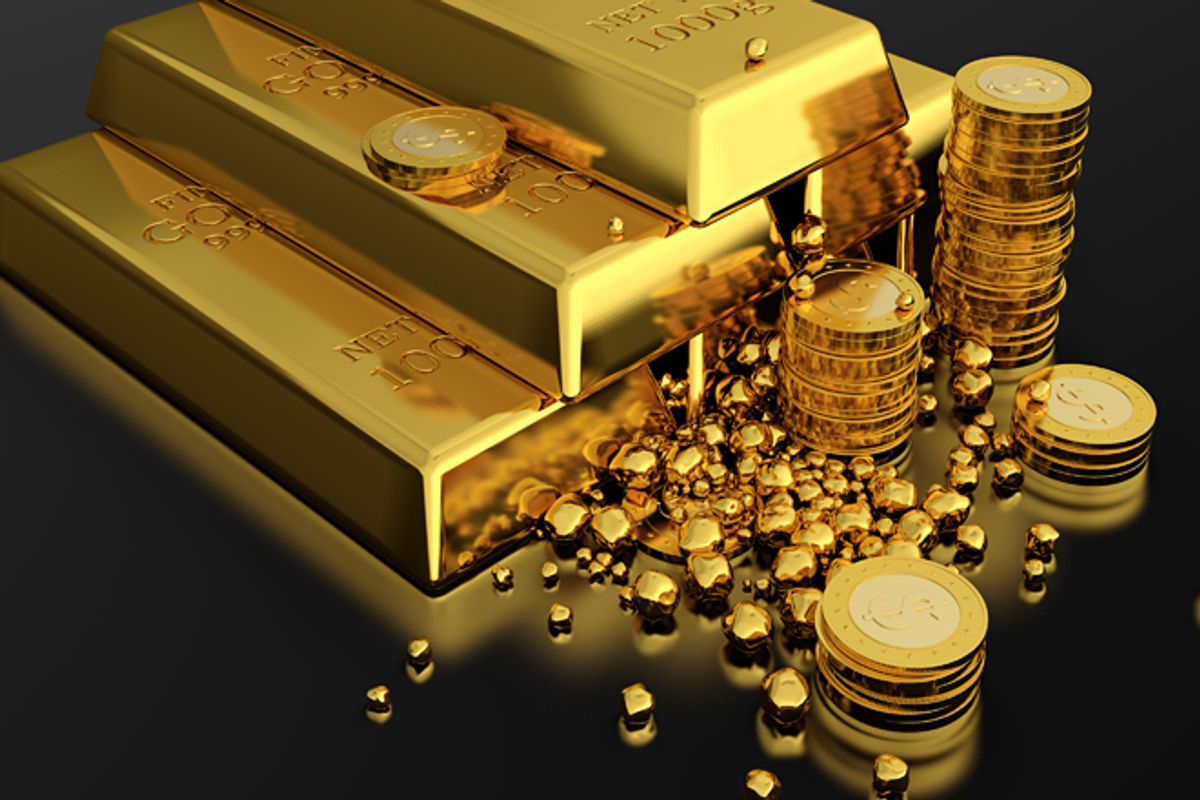 Pick an economist -- just about any economist, left, right or center -- and see what happens when you suggest that the United States should return to the "gold standard." Unless your chosen wonk happens to be of the ultra-conservative Austrian persuasion, the most likely response will be a sigh and an eye-roll. For the vast majority of the field, the inadvisability of running a modern advanced economy on the gold standard is settled science. It's a bad idea.

We'll get to the reasons for that in just a bit. For now, the newsworthy thing to consider is that a substantial portion of the Republican Party disagrees with mainstream economic thinking -- to the point that the 2012 GOP platform includes a clear shout-out to good old gold.

The exact words "gold standard" aren't included in the text, but the intent -- the longing -- is obvious.

Determined to crush the double-digit inflation that was part of the Carter Administration’s economic legacy, President Reagan, shortly after his inauguration, established a commission to consider the feasibility of a metallic basis for U.S. currency. The commission advised against such a move. Now, three decades later, as we face the task of cleaning up the wreckage of the current Administration’s policies, we propose a similar commission to investigate possible ways to set a fixed value for the dollar.

"... A fixed value for the dollar." Wouldn't it be nice? No more messy inflation. No more reckless government printing of "fiat" currency. A dollar would be a dollar, redeemable in a set amount of some solid, physical entity. And the most obvious contender for that honor is, of course, gold.

It's not an utterly crazy idea -- historically, many countries have tied their currencies to gold (although not a single nation on the planet does so now, which just might be significant). The United States -- in a halfhearted, wishy-washy kind of way -- was still on the gold standard as late as 1971, until that wild liberal Richard Nixon finally jettisoned it once and for all.

But the attraction of the gold standard today is not actually rooted in its feasibility. The seductiveness of its allure transcends logical or quantifiable argument. Its hold on modern Republicans is psychological.

It is no accident that lust for the gold standard is popping up in a political party that appears, on every front, to feel mortally challenged by destabilizing change. The United States is a country whose ethnic makeup is changing dramatically in a world in which new superpowers are threatening American global primacy. Good God -- a black man with an Arabic middle name is president and same-sex marriages are legal in some states. Women are even allowed to vote! Ancient verities are under threat from all sides! In a postmodern, multicultural, topsy-turvy world, the gold standard is alluring for the same reason that biblical literalism, border walls and strict constitutional constructionism are hot sellers for the Republican hard right. The gold says, flatly: This is the truth, no ifs, ands or buts. It is a commandment.

So why is the gold standard a bad idea? Economist Robert Samuelson has a good summary here, but by far the most important thing to understand is that adhering to the gold standard severely limits government flexibility in responding to what's actually happening, economically, in the world. The business cycle goes up and down, recessions -- and crashes -- come and go, and over time, governments and economists have determined that a mix of fiscal and monetary policy can ameliorate the harshest effects of those zigs and zags.

Economist Barry Eichengreen has famously pointed out that the countries that were the first to abandon the gold standard in the Great Depression were the first to recover. Those who continued to stay on the gold standard were forced to keep interest rate high in order to maintain their currency's gold-pegged value. But high interest rates are bad medicine during a recessionary economy. They just make things worse.

A good current example of what happens when you can't revalue your currency according to the exigencies of the economic climate is offered by Greece. For all intents and purposes, Greece is on the gold standard, aka the euro. It has no executive power to change the value at which its goods and services are sold on the common market. If the drachma still existed, Greece could go through a devaluation that would make Greek products cheaper and more attractive to the outside world, which would in turn boost exports and jobs and allow the economy to grow. Without that option, Greece is stuck with high unemployment and a shrinking economy. Nobody wants to be Greece. Adherence to the gold standard without regard to global economic conditions makes us all Greece.

There are other reasons to be distrustful of gold. For one thing, tying your currency's value to a commodity that miners dig up out of the ground hardly seems scientific. For another, a look back at the 19th and early 20th centuries, when the United States followed the gold standard, reveals an era of constant financial panics and disastrous recessions. There's also the technical problem that switching to a gold standard now, given the amount of gold that currently exists in the world, according to Samuelson, would require gold's value to be pegged at about $10,000 an ounce, instead of $1,500, and that transition would probably constitute a jarring shock for financial markets.

But nothing trumps the basic point of flexibility. With a gold standard, there is no monetary policy tweaked up or down by the Federal Reserve every month, and there is no stimulus funded by borrowed money. If the economy slumps, and unemployment surges, them's the breaks. People suffer. A hurricane crashes into the coast, and no evacuation is ordered. You just weather it.

Of course, as the Atlantic's Matt O'Brien and many others have noted, for conservative gold standard fans, that lack of flexibility is not a bug -- it's a feature! It's the whole point! If you distrust big government, if your goal is to tie the hands of policymakers, prevent stimulus spending and enforce balanced budgets, the gold standard seems like an awesome tool to get you where you want to go.

Meanwhile "fiat" currency, the system that the world currently uses, in which the value of a currency basically depends upon the world's belief that a country has the wherewithal to make good on its debts, seems like make-believe, an invitation to policymakers to just give the people what they want, a disastrous enabler of the nanny state. Go back to the gold standard and you stab Big Government in the heart. What red, white and blue Tea Party Republican doesn't want that?

There's just one little problem. People tend to get unhappy when unemployment spikes and economies crash. And in a democracy those people vote. And when push comes to shove, they'll vote for the politicians who will exercise their power to create jobs and boost economic growth.

It may be just that simple: Democracy and the gold standard are not compatible. No "rule" -- no "standard" can resist the will of the people. That's messy, but life is messy. Reality is messy. We're all making things up as we go along. A "fiat" currency may capture the essence of this uncertain world better than any inflexible standard.

But if there's one thing that characterizes the current makeup of the Republican Party, it is a distinct distaste for current reality. Science says the earth is warming because of human activity. So Republicans reject the science. (Let's not even start on evolution and creationism.) Americans are steadily becoming more accepting of gay marriage -- OK, the Republican platform will declare that it will defend (unlike Obama) the Defense of Marriage Act in federal court. The U.S. is becoming dramatically more ethnically diverse. So what? The Republican Party goes out of its way to embrace policies that are hostile to Latino and African-American sensitivities.

The world is changing -- it's always changing -- and the contemporary Republican Party doesn't like it. So what does it do? It looks for unimpeachable sources of authority that will hold back the tide. The Bible says homosexuality is an abomination and mankind is descended from Adam and Eve. So be it, and let's make sure no other version gets taught in school. The Constitution must only be interpreted in terms of what the founders intended -- it simply cannot be allowed to evolve according to changing mores. Too many Latinos? Build a border wall. These are all commandments that ignore the messy reality and nuance and complexity of life, while offering safe, unassailable strictures to hide behind.