Best condom on the market

When you're ready to get hot and heavy, always go with Trojan's Ecstasy Ultra Ribbed 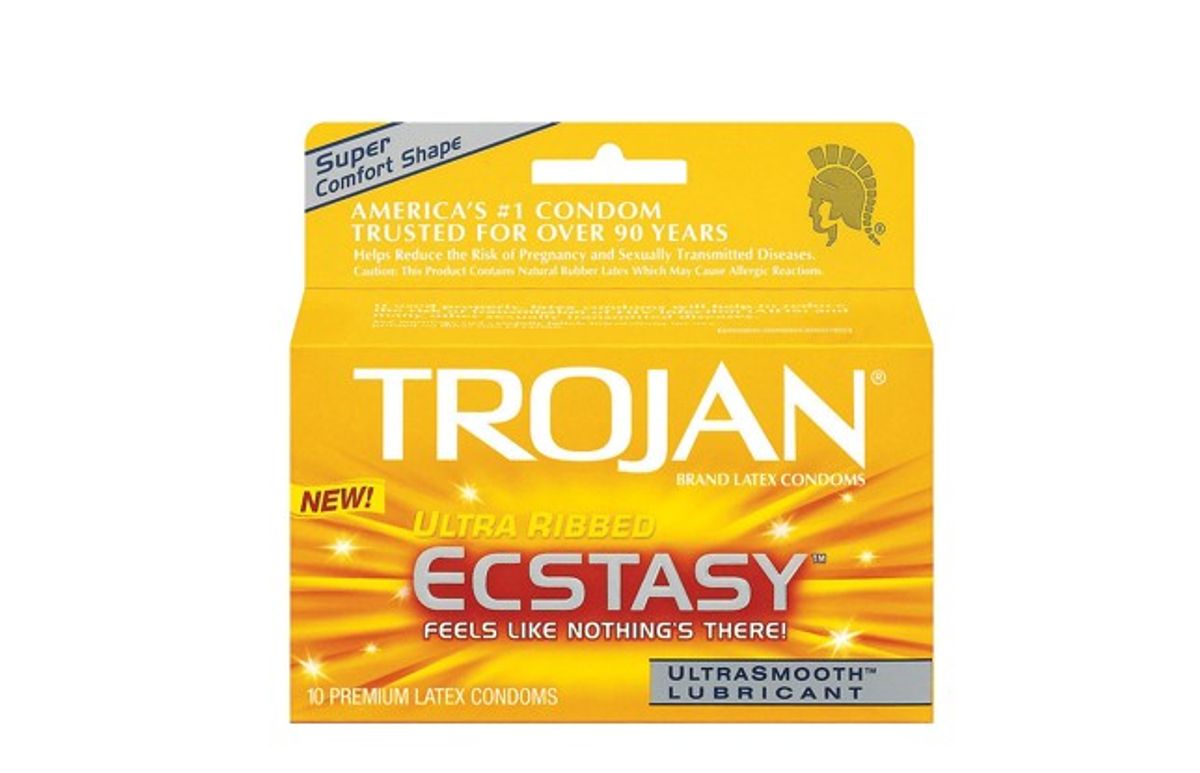 For condoms, the pack you should throw in your cart is the Trojan Ecstasy Ultra Ribbed.

The taboos of talking about sex and everything it entails conspire to make condoms shopping hushed, instant decisions for many people. Doing a little homework and knowing which kind to get is important because drugstore aisle shopping decisions happen in a matter of seconds – not minutes. Who wants to talk to the store clerk about their penis size? Where they’re going to do it? That they’re hoping to last longer?

Those conversations you never have with store clerks, with partners, or even with yourselves about sex, condoms, lube, toys, positions, and pleasure? They’re my daily bread as a sex researcher at Indiana University, a sexual health educator at The Kinsey Institute, and a sex columnist/author of books like "Because It Feels Good: A Woman's Guide to Sexual Pleasure and Satisfaction" and "Great in Bed" (to name a few).

Through scientific research that I conduct with my team at Indiana University about condoms, lubricants, and other sexual enhancement products, I’ve had amazing opportunities to learn more about the condoms that work well for people, that are linked to more pleasurable, satisfying sex, and – when relevant – safer outcomes.

In addition to conducting my own research, I attend conferences where I learn from other scientists’ work. And in classrooms, where I’ve been teaching college students about sex for the past decade, I get to hear from young men and women about the condoms they like/dislike, which brands they trust, and which ones feel good for themselves or their partner (for far more details on sex, condom use, circumcision, and pleasure, check out one of my books). Combined, these experiences shape my top condom picks.

So, why the Trojan Ecstasy Ultra Ribbed condoms?

In an independent test of 30 couples that my team ran for Men’s Health magazine, we found that men liked the Trojan Ecstasy Ultra Ribbed above and beyond the six condoms they tested (Durex Extra Sensitive, Inspiral, Trojan Ecstasy Her Pleasure, Lifestyles x2, and Lifestyles Skyn were the other five).

Why didn't we record data directly from women on this test?

We do couples studies very, very often and survey women more often than men. This particular test was a study about fit on the penis, comfort on the penis, etc. We focused on men, but some women volunteered their reactions.

In other work I've done, I haven't yet found consistent patterns about women's perceptions related to condom use with one exception: Women more often dislike condoms with warming/cooling properties to the lube – no surprise given the sensitivity of the vagina. Thus far, I haven't seen a consistent pattern to much else, likely due to the fact that there are fewer nerve endings inside the vaginal canal. That plus the fact that most conforms are lubricated (and lube reduces friction) means that most women's vaginas won't pick up subtle differences in condom style/fit. They more often notice lubricating properties of condoms.

We found that men thought the Trojan Ecstasy Ultra Ribbed condom was comfortable to wear and provided more sensation during sex, each of which is consistent with the roomier design and being lubricated inside and out. Men also rated it as being fun to use, as a condom that helped them last longer, and as more pleasurable for their partner. (The latter likely being because of the ribbing and extra lubricant – several men specifically cited the amount of lube as being among the characteristics of the Trojan Ecstasy Ultra Ribbed that they liked best.)

Why did they like this condom better? Trojan Ecstasy condoms are shaped like a baseball bat, giving more room throughout the condom while still maintaining a snug base so that a man can feel that the condom’s still on and hasn’t slipped off. Because a man’s penis is rich in nerve endings – especially at the glans (head) – a too-tight feeling along the shaft and head can dull sensation. On the other hand, snugness around the base allows men to relax, confident in the knowledge that they and their partner are protected.There’s also a bit of lube inside and outside the condom (most lubricated condoms only have lubricated exteriors). The lubricated interior can make wearing a condom more pleasurable and natural-feeling. And the lubricated outside? That helps make it more pleasurable yet help keep the condom in one piece, even with all that friction.

The roomy design of the Ecstasy line builds, in some ways, on previous condom designs like Inspiral, Pleasure Plus, and Trojan’s Twisted Pleasure – all of which were innovative in their time, but the Ecstasy took it up a notch.

(In full disclosure, my Indiana University research team and I have partnered with Trojan on various research studies. However, I’ve been studying condoms longer than I’ve been working with Trojan and – given how much of my sex research and education work at IU involves understanding sexual enhancement products – I’ve become very familiar, and have tested, other brands of condoms as well.)

That’s not to say that there are no other good condoms on the market; there absolutely are. But the right condom for most people, most of the time, is likely to be the Trojan Ecstasy Ultra Ribbed.

Here are some exceptions: If standard condoms are far too small or far too big for you – and if you live in the EU – then you’re in luck! You, my friend, can order TheyFit condoms (if you’re outside the EU, things are trickier), which now come in 95 sizes. (My research team conducted a study on TheyFit condoms several years ago when they were available in the US and found that, for some men, fitted condoms were safer and more pleasurable to use.)

Allergic to latex? Go with Durex Avanti Bare (but still skip oil-based lubes, which can cause some condoms – even some “non-latex” condoms – to break more easily).

Looking to last a little longer? You don’t need a condom for that (read science-backed tips for how to last longer, or how to get your partner to be cool with your not lasting longer, in my latest book, "Sex Made Easy"). But if you’re dead-set on using a condom to help you last longer in the short term, choose Trojan Extended Pleasure or Durex Performax – just make sure that you don’t put it on inside out or the desensitizing lubricant, which is benzocaine-based and meant to decrease sensation to your penis, could accidentally numb/decrease sensation to your partner’s body. Which would suck.

Yes, it would be great if people felt comfortable enough buying sex products that they felt they could take their time to casually browse every box of condoms or bottle of lubricant that looked interesting. Even better if they felt like they could ask store clerks or fellow shoppers questions like, “Which one’s your favorite?” or, for condoms, “Does this come in a smaller size?”

But that’s not how it works (yet; I can dream of a more sex-positive society to come!). Even if the sex the products are being used for is long and deliberate, the condom shopping experience tends to be in and out, as fast as humanly possible.

Being that this is how it is today, if you're going to grab a pack in an instant, I recommend the Trojan Ecstasy Ultra Ribbed as the pack to get.