Yes, our political parties have become glorified brands, but is this necessarily a bad thing? 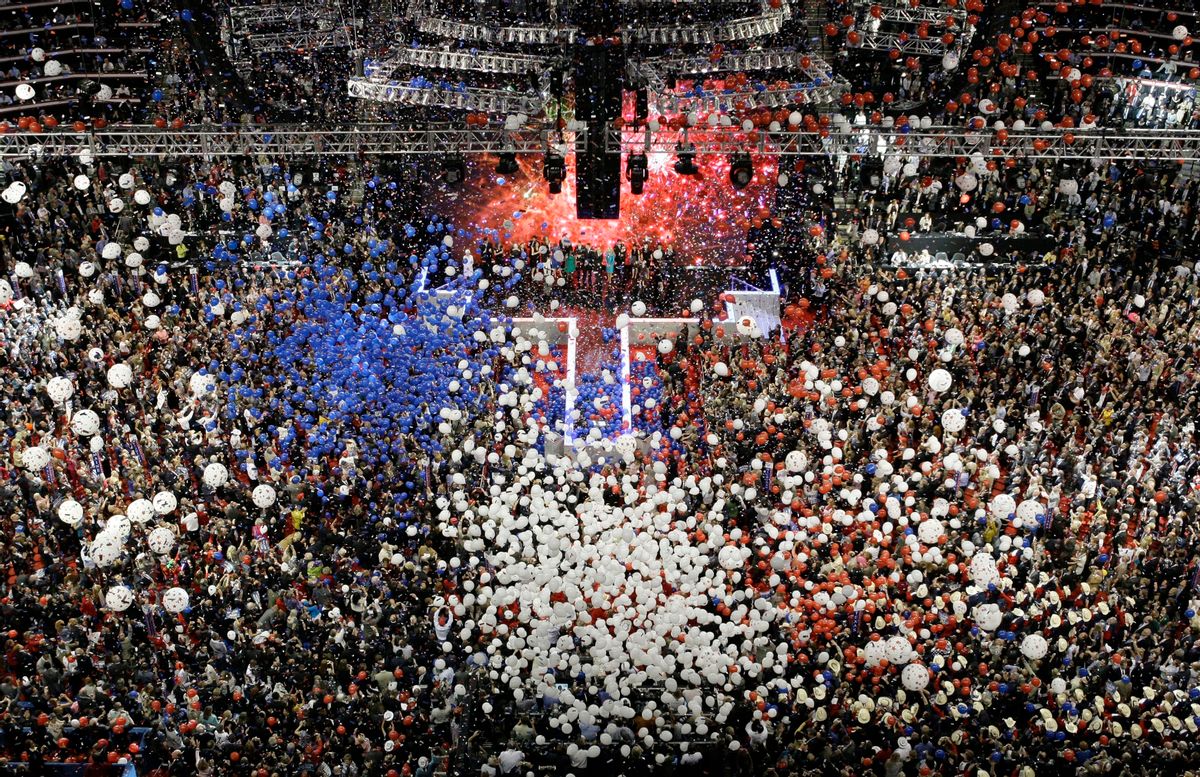 “I’m not going to watch the parties,” a retiree told me recently.  “In the old days they were exciting.  They chose the candidate at the convention.  Now it’s just like a long advertisement.”

Exactly so.  Today’s parties are product placement parties, not mass parties.  They are not federations of political activists from the neighborhood and county level all the way to Washington, D.C.  Instead, they are small but well-funded organizations that seek to sell candidates using the techniques developed by advertisers to sell phones or cars or shampoo.

Although America’s Founders dreaded them, political parties formed quickly in the early United States.  But in the first generation the parties were little more than elite factions.  The extension of the vote to all adult white men in the Jacksonian era gave Martin Van Buren and other politicians a chance to construct the kind  of mass parties that existed until the 1970s.  Parties were loose national federations of state and local political machines, which came together at conventions to choose candidates and cut deals.

Today’s Democrats and Republicans inherit their names from the mass party era, but they are fundamentally different things.  State and local political machines have largely been replaced by candidate-centered organizations.  The local bosses who organized torch-lit parades have been replaced by political consultants and pollsters who craft TV and radio ads.  Money has always been important in American politics, but the local grandee who financed the older party machine has largely been replaced by billionaire donors who may live nowhere near a particular state or district and may be more concerned with ideological purity than with effective governance.

We may bemoan their decline, but the mass parties were victims of social trends and political reforms that are mostly for the better and are unlikely to be reversed.  In addition to selecting candidates, the parties used to perform a number of functions which are better performed by other organizations in a modern society.

For example, civil service reform killed off one function of 19th-century American political parties — the provision of jobs by successful candidates to their followers, the so-called spoils system (“to the victors go the spoils”).  As late as the Civil War, President Lincoln appointed political supporters as generals, and the main qualification for getting a post office job back then was party loyalty.  Presidents and governors still appoint top officials, but the days when a victorious party emptied out all government offices and replaced the rival party’s hacks with its own are long gone.

In addition to rewarding supporters with jobs, the old party machines provided them with welfare.  If you were poor and voted the way the local ward heeler told you to vote, the boss might remember to provide a bucket of coal in the winter or a turkey or ham at Christmas.  That economic security function of the parties is now performed by welfare state programs like Social Security and Medicare and unemployment insurance, on a nonpartisan basis.

Parties have also lost much of their importance when it comes to promoting particular causes.  That task has largely been assumed by nonprofit organizations — the Sierra Club for environmentalism, the Family Research Council for social conservatism.  A party may pay lip service to your particular cause when it wants your vote. But by sending donations to these nonprofit lobbies you can help to ensure that your issue will be brought to legislatures and executive branch officials at all levels of government between elections.

Now that they have lost all or most of their functions in providing jobs and welfare and promoting causes, the parties still have the function of nominating candidates.  But in the 1960s and 1970s reformers in both parties took that task away from elected party officials and gave it to voters in partisan (or, sometimes, nonpartisan) primaries.  The hope was that democracy would be revitalized, by cutting political professionals out of the task of choosing candidates.  Instead, only small numbers of  voters — generally ideological zealots or interest-group activists — show up for primaries.  The majority of Americans can’t be bothered.

Even in the absence of the shift to primaries, mass party activism probably would have given way to mass indifference, once the goods supplied by parties were supplied by other institutions.  Other democracies have higher levels of voting, but the trend away from mass membership parties is universal. Today’s political parties are essentially brands that are captured from election to election by individual candidates and their networks of donors, lobbyists, nonprofit groups and spin doctors.

Is this a bad thing?   We should resist the belief that there was a golden age of democracy in the past.  The machine parties mobilized far more Americans than do modern, mass media brand parties.  But they were mobilized to vote robotically, march robotically and chant robotically.  If they voted the wrong way in a one-party town, county or state, they might lose their jobs or find that the landlord had started eviction proceedings.  (Decades ago a Chicago landlord  told an acquaintance of mine, “I’m glad you voted today”; the tenant was convinced that the landlord knew how he had voted, as well).

To be sure, there are downsides to today’s product placement parties.  One of them is the increasing unreality of campaign promises.  In the old days, if a politician received the support of a county political machine by promising a new road, the machine would hold him to that promise.

Today’s product placement parties are selling fantasies to an atomized electorate, not making real-world promises to powerful politicians.  When the slogans are forgotten the day after the election, voters who protest would be as ridiculous as a customer who demands that a store return his money, because when he used a particular brand of shampoo he didn’t find himself transported to an Irish waterfall or metamorphosed into an international man of mystery, as promised by the ad.

Parties that appeal to basic values instead of detailed agendas make more sense than programmatic parties, for two reasons.  To begin with, most voters, including most educated voters, do not and cannot have well-thought-out opinions on all of the issues of the day, from global warming to foreign policy to quantitative easing. Moreover, circumstances change, and policies must adapt.

So there would be nothing wrong with a candidate-centered faction of donors, technocrats and media personnel that declared:  “Frankly, we don’t know what the world will be like in a few years and neither do you.  Whoever is in office is going to have to improvise, in response to events.  We share your values more than the other team, so you can trust us to improvise in a way that you would approve of, if you were in charge and had access to all the relevant information.”

Democracy on the scale of the nation-state is a relatively new invention, and nobody can say what forms representative institutions will take.  But one thing is certain.  The age of mass parties is not going to return, unless we replace military and civil service meritocracy with partisan spoilsmanship, replace the welfare state with party patronage and get rid of single-issue advocacy groups.  The old machine-based party system was a victim of social change and government reform, and we shouldn’t want it back even if we could have it.