Obama and Kumar go to the DNC 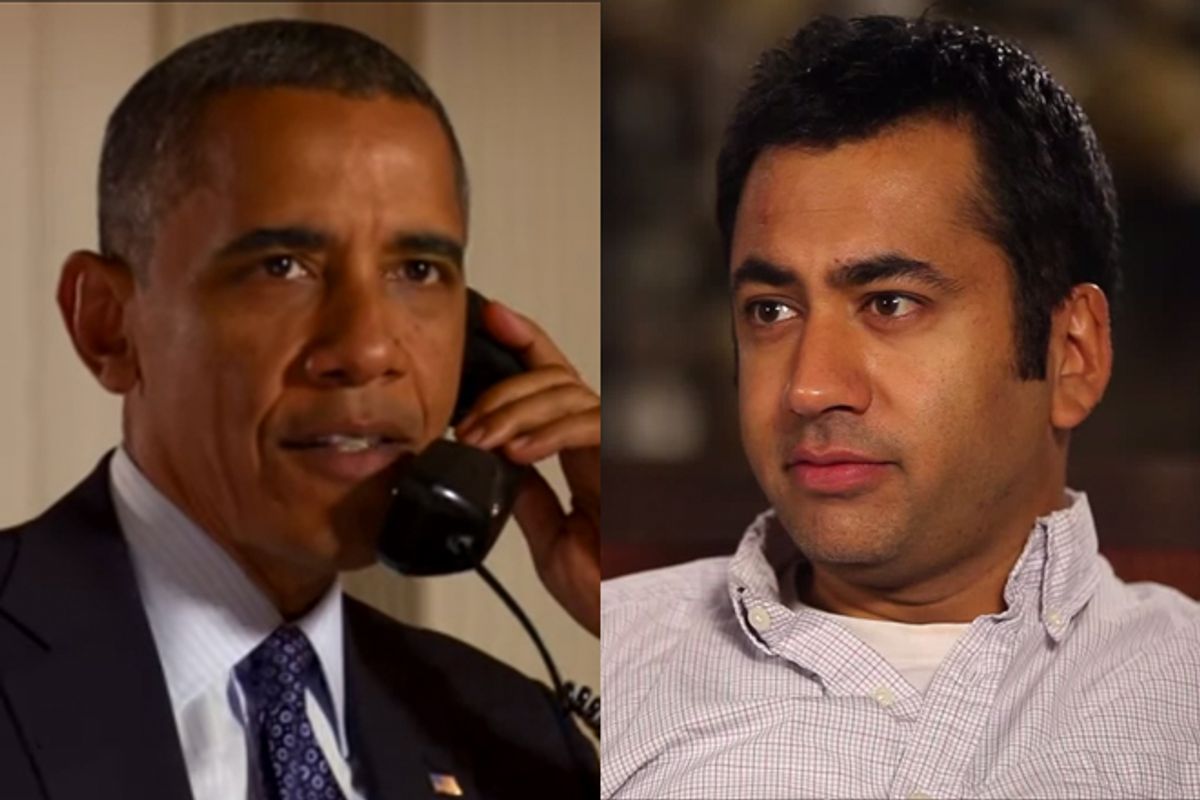 Which is more adorable: that the president of the United States is so obviously reaching out for the stoner vote, or that Kal Penn, the star of the "Harold & Kumar" movies, has carved out such an impressive political career? The answer appears to be a dead heat, as evidenced in the promo the two just put together for the Democratic convention. As Penn tweeted late Monday,  "Just got off the phone with the President. It was pretty intense."

In the clip, the commander in chief gets on the phone and, as dramatic music swells, solemnly tells the person on the other end of the line, "Hey, this is Barack. Listen, I need to know if you're on board. OK, good, because I'm counting on you. Everybody is. We have to get this right. So there's a lot at stake here. Just remember that I'm trusting you on this and I'll see you there."

Cut to Penn and his "Harold & Kumar" costar John Cho, lounging amid the detritus of a pizza-and-orange-soda binge, and zonked out in front of the the cartoon bleeps and boinks emanating from the TV. "Who was that?" asks Cho. "The president," Penn says. "Sweet," Cho replies. And then the two point at the TV and burst into giggles.

The punch line? Penn, who was the associate director of the White House Office of Public Engagement for two years before leaving to make another "Harold & Kumar" movie, is hosting the Democratic convention live coverage on BarackObama.com this week. He's also speaking at the convention Tuesday night.

Politicians have long known the value of playing it for laughs; aren't we all just steeling ourselves for the inevitable awkward Paul Ryan cameos on "Saturday Night Live" in the weeks to come? But beyond the silliness of putting the president in a goofy clip with the stars of one of the truly great stoner classics of all time is something real: The confident understanding that smart and funny are not opposing concepts.

Unlike the stiff and stuffy jibes at the Republican convention, the DNC (much like Obama's snappy comeback-laden Twitter feed) aspires to a more casual, near rebellious spirit. The result is a targeted appeal to the folks who get their news from Jon Stewart and Stephen Colbert, who know that news, politics and farce go hand in hand. And Penn, with his sly mix of brains, flat-out goofiness and job history with the administration, is a fresh and highly promising choice to cover the convention. He may not ever reach the absurd heights of Dirty Harry arguing with a piece of furniture, but he's definitely the guy you want along while you're polishing off the Fanta, watching the antics unfold absurdly before you.