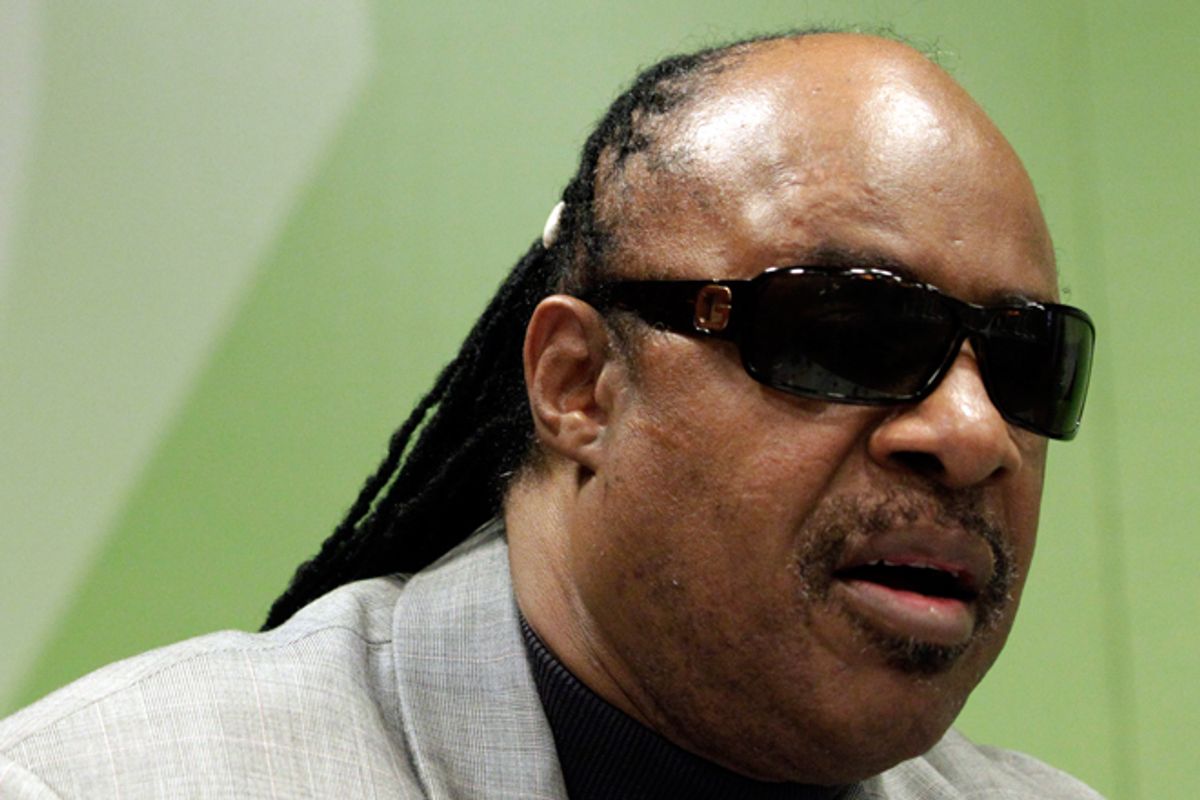 At least he didn't post his apology on his Web page. Stevie Wonder: still an innovator!

Adding his name to the long, long list of celebrities who forgot that thoughts go on the inside, the iconic singer has been doing the apology tour after making some seriously strange remarks in the Guardian newspaper. In a conversation about his lengthy musical career, why race is still an issue, and the Queen of England's astrological sign, Wonder was asked about his current singer-songwriter heir apparent, Frank Ocean. After acknowledging, "Yeah, I like Frank," he added a few observations about Ocean's openness about his romantic history with another man. "I think honestly, some people who think they're gay, they're confused," Wonder said. "People can misconstrue closeness for love. People can feel connected, they bond. I'm not saying all [gay people are confused]. Some people have a desire to be with the same sex. But that's them."

It was a weird place to go in the conversation, to say the least. But it's not because the 62-year-old Wonder was entirely wrong -- even if he isn't in any position to speculate on what Ocean's intimate life or feelings are beyond what he's revealed to his fans. Some people, especially when they're young -- like Ocean was during the relationship he's spoken about -- do experiment sexually. Chances are a fair number of the hetero females you went to college with had love affairs with other girls before settling back into their straight lives. Sexuality is remarkably fluid, and Wonder isn't fully off the mark to suggest that a deep attachment to a specific person doesn't necessarily constitute an orientation. Where he errs is to assume that a spectrum of attraction and fluidity equal "confusion."

But what made Wonder's remarks truly odd was that he didn't acknowledge that the "connection" of which he speaks so often flows in the other direction. Look around: There is a great big world full of lesbians and gays who have made a spirited go of it in the straight world before landing where their hearts truly belonged. There are gay men and women who speak of their opposite sex exes with great affection and regard, remnants of a time in their lives when, as Wonder says, closeness could almost pass for love.

More significantly, in a world in which far too many people still dangerously believe that homosexuality is something that can be overcome with prayer or determination, something that's unnatural, the suggestion of sexual "confusion" comes with a giant heaping of cultural baggage. Wonder may have tempered his comments with the caveat that he wasn't speaking of all gay people, but the potential hurtfulness of his remains. As one of the Guardian commenters wrote, "I admit it, I am sensitive. I hear too often people be dismissive of sexuality."

Facing a swift backlash, Wonder beat a hasty path to mea culpa land. But unlike recent foot-in-mouth sufferers like Daniel Tosh, Mario Batali, David Chalian and Niall Horan, Wonder didn't take to social media to issue his regrets. (And yes, visually impaired people are all over the Internet, in case you hadn't noticed.)

Wonder instead issued a statement to MTV that "I’m sorry that my words about anyone feeling confused about their love were misunderstood. No one has been a greater advocate for the power of love in this world than I; both in my life and in my music. Clearly, love is love, between a man and a woman, a woman and a man, a woman and a woman and a man and a man. What I'm not confused about is the world needing much more love, no hate, no prejudice, no bigotry and more unity, peace and understanding. Period." It's just about acceptance, in all its many forms, unconfused and clear-eyed. When Frank Ocean said he fell in love with another man, he didn't say he was "confused" or "misconstrued" about his feelings, and so neither should anyone else. And it bears clarification, again and again.