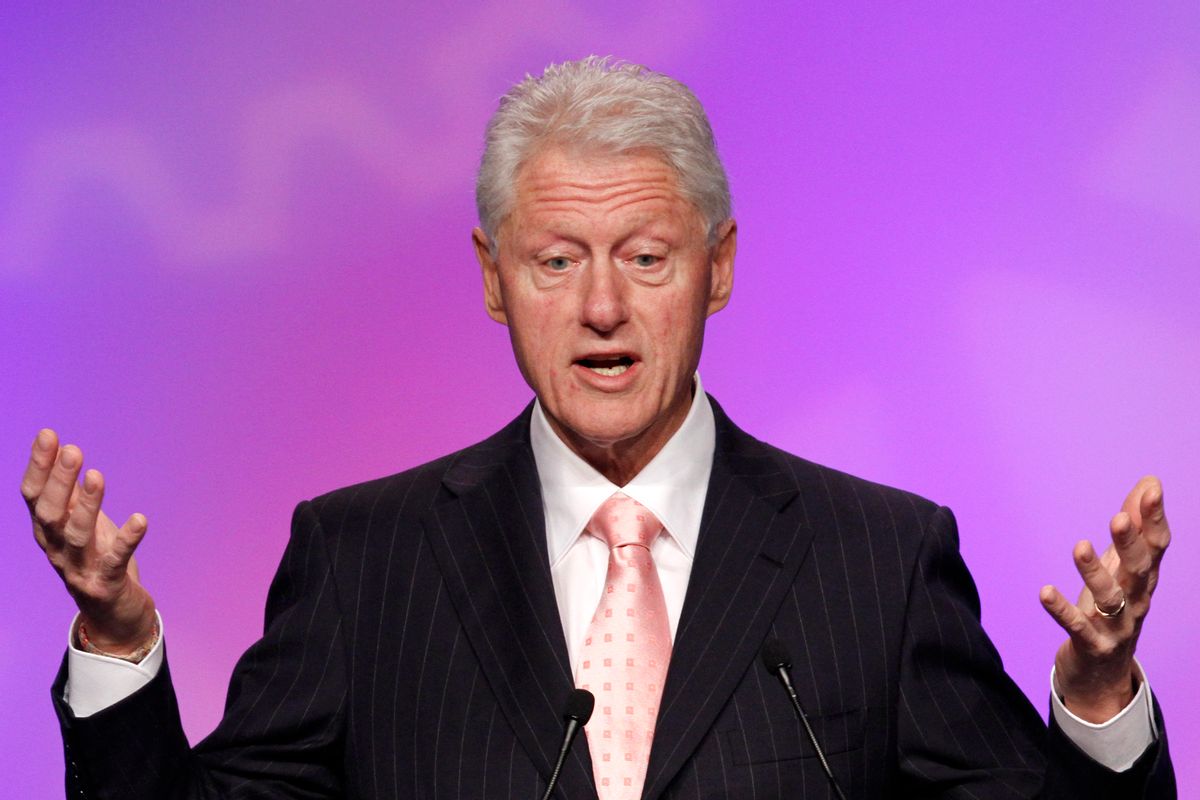 Hello from Charlotte, where the diversity of the Democratic Party is an immediately obvious and welcome contrast with Tampa (even if the weather is not). Where the Republican convention seemed a blur of white hair, white faces and red, white and blue outfits, the crowd milling around downtown in the pouring rain Monday looked like America, not only in racial diversity but in class and age as well.  This is a younger party, which bodes well for its future.

Reporters are also milling around looking for stories, trying to find rumblings of dissent where few exist (aside from Occupy, which is in a category by itself). I've talked to at least a dozen delegates who've described being pressed by reporters into divulging some way in which they or their constituency – labor, Latinos, LGBT folks – have been let down by the president. "They're just reaching," a Latino legislator told me.

My favorite non-story so far involves the alleged danger President Clinton poses to Obama with his still-unvetted convention speech scheduled for Wednesday night. Some of the coverage tries to make Clinton sound like he could be the Democrats' Clint Eastwood – an old celebrity gunslinger who might not be able to shoot straight anymore. But most of it is straight from the 2008 playbook: The two presidents don't really like one another. Bill's still mad about Hillary's loss. He might even prefer a Romney win, since it could set up a 2016 Clinton candidacy.

The dumbest piece, not surprisingly, comes from the Daily Caller, which laments Clinton's assignment "to prop up a failing president who represents the opposite of what Clinton represents, in both style and substance." The piece states, without evidence, "In fact, Clinton probably doesn’t want Obama to win."

BuzzFeed's Ben Smith declared, "Democrats wait, nervously, on Clinton speech," making a big deal about the fact that the former president's is the only convention address that hasn't been vetted (ignoring the fact that he's also the only former president on the roster). "The Obama camp's worry is not that he would be an out-of-control Clint Eastwood, who also did not submit his remarks, but rather that any private strategic differences might play out in public," Smith writes.

Even though Smith's former employer Politico downplays the Obama team's worries about the unvetted speech, Glenn Thrush and Maggie Haberman write that "it's success is critical for Obama, a deeply polarizing candidate who badly needs his more conservative predecessor’s clout as a validator among independent voters turned off by massive government spending." They don't bother to give examples of how Clinton is more conservative than the centrist Obama.

Even the New Yorker's Ryan Lizza, one of my favorite reporters, warmed over a lot of old anecdotes to show that there's still tension between the two men – not surprisingly -- but that they've also not surprisingly reached an accommodation. I didn't learn much from Lizza I didn't already know. He did share a story he heard from the late Tim Russert, who allegedly heard it from the late Ted Kennedy, about Clinton dissing Obama, when seeking Kennedy's endorsement for Hillary, by saying that "a few years ago he'd have been carrying our bags." Interesting. "Game Change" had Clinton telling Kennedy (with zero sourcing) that Obama would have been "serving our coffee." So was it carrying bags or serving coffee? Clearly Kennedy took something away from his conversation with Clinton that he found condescending to Obama, but these attempts to make Clinton's pique at the upstart Illinois senator seem vaguely racial – "Game Change" pushed that idea harder than Lizza does – is getting tiresome.

And Lizza closes his piece with the suggestion that Clinton may even want Romney to win, because it would (supposedly) set up the 2016 race better for Hillary Clinton. The evidence? Two anonymous sources say Clinton advisor Douglas Band is voting for Romney, which Band would neither confirm nor deny. OK, the no-comment is a little ominous, but in the end, would that really prove that Clinton is secretly rooting for Romney?

I'm the first to admit that occasionally Clinton has seemed to undermine Obama's case against Romney, most notably when he praised Romney's "sterling" record at Bain Capital and suggested he ease up on his attacks on the financial sector. I disagreed with Clinton publicly. But at this stage in the campaign, Clinton knows what's at stake – and it's his own project of trying to convince white working-class and middle-class voters that government – and Democrats -- care about them. Is there some satisfying payback for Clinton in the fact that Obama once dissed him as less "transformative" than Ronald Reagan – and is now relying on him to "transform" public opinion about Obama's record, especially with the white working class? Probably. He's human.

But Republicans are hyping this Clinton-Obama "tension" story line to make our centrist president out to be some socialist usurper, when his politics are almost identical to our last centrist Democratic president – and too many reporters are taking the bait. I expect Clinton to destroy the Romney-Ryan welfare lies for good. If anyone should be nervous about Clinton's unvetted speech, it's Mitt Romney.