A first-time novelist gulped and let an editor cut his book in half. Here's why that was a smart move 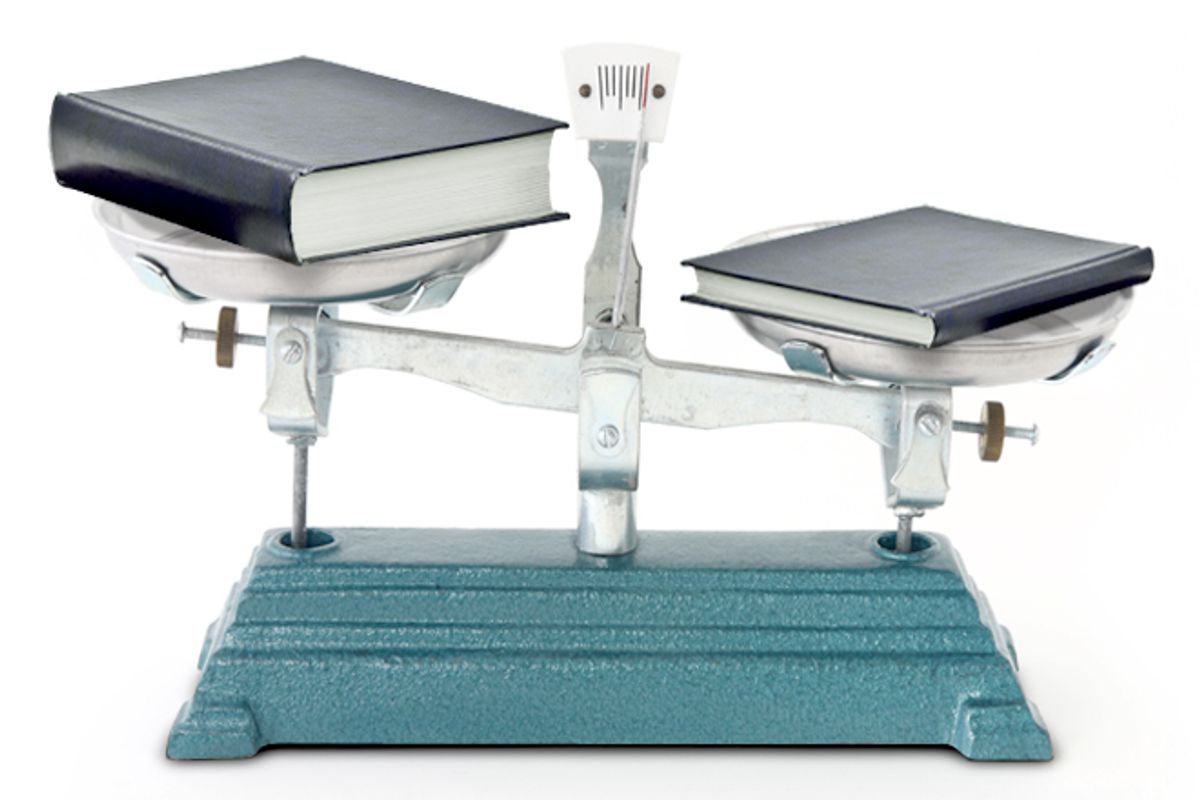 There's a canard that book editors don't edit anymore, and David Abrams' recent blog post about the publication of his first novel, "Fobbit," is well worth reading just to see it refuted. Perhaps even more striking, however, is the way Abrams' story alludes to an aspect of any book that has an enormous if somewhat mysterious influence on its quality: length.

"Fobbit," a blackly comic novel set among American armed services support personnel in Baghdad during the Iraq War, was the product of five years' work by the struggling Abrams. The author's final draft clocked in at over 190,000 words; in printed-book form, it would likely have topped 700 pages.

Abrams' agent told him the novel was too long; the author disagreed. According to Abrams, the two of them "insistently lobbed the issue of length back and forth like it was a ragged and bruised tennis ball." The author wouldn't yield much, and what they ended up sending out to editors was a manuscript only a bit shorter than the original. Quite a few turned it down, including two (whose responses Abrams publishes) who said they found the humor more muted and/or less black than they'd like.

An editorial assistant at Grove Press, Peter Blackstock -- he contributes his own version of the story to the post -- loved Abrams' manuscript enough to persuade his employer to let him take on "Fobbit" as his first project. One catch, though: Blackstock also thought the novel was too long, "not because books can’t be 190,000 words, but the story David was telling felt like a 100,000-word story." He was able to persuade Abrams to adopt an alternate structure and nearly halve the novel's word count. When the author looks back on his initial resistance to his agent's requests for cuts, he acknowledges, "I was bull-headed, full of hubris and am now thoroughly embarrassed."

Abrams refers to the excised portions of "Fobbit" as "fatty layers," but whether they were good in and of themselves doesn't matter; they had to go for the sake of the whole. That's not a marketing judgment, as some might presume, a sop to readers frightened off by long novels. The enormous popularity of George R.R. Martin's fantasy series, "A Song of Ice and Fire," and the doorstop-generating Stephen King offer ample proof that many are eager to embrace 800-plus-page tomes. But Abrams' earliest readers didn't think "Fobbit" was that kind of novel.

How long, then, should a novel be? As Blackstock implies, each book seems to have its ideal length coded into its identity. Michelangelo famously remarked that every block of stone has a statue inside it and the sculptor's task is to set it free. Writers, unlike sculptors, start out with nothing, but as the words, sentences, paragraphs and scenes accrue, knowing what to leave out (or cut) and when to stop becomes as important as knowing what to put in. In addition to being reluctant to "kill your darlings" (that is, to chuck pet passages), a writer might cling to the idea that he or she has written a "big book," a type of novel that proclaims its author's ambition and (sometimes) wins critical respect.

But why do some books need to be shorter than others? It's not just a question of good passages and bad ones. Abrams, an Army veteran who served in Baghdad, no doubt has scads of great and even important material to convey. Yet the type of novel he wrote has built-in limits, all having to do with the emotional experience of its readers.

A narrative builds a world in the reader's imagination as it goes along. The beginning is the hardest part, as the wary reader pokes her nose through the door, peers around a bit and tries to figure out if this is her kind of place. If the reader and the novel click, she keeps going. With luck, the reader's sense of herself and her own surroundings fades as the world of the novel fills her mind.

A story conjures up its world not with descriptions of scenery (or not primarily with that), but through the events that occur there and why, the characters introduced and their attitudes, the voice of whoever is telling the tale and what it implies. You may learn that this is a place where a proud rich gentleman looks down his nose at provincial dances or where a wizard knocks at the door suggesting an adventure or where a stranger with a questionable past comes to town in search of his long-lost love.

Some novels assemble worlds readers want to immerse themselves in: Tolkien's Middle-earth, Trollope's Barsetshire, Tolstoy's Russia. Others are less inviting, or at the very least less comfortable: the nameless setting of Kafka's "Metamorphosis," the narrow confines of Emma Donoghue's "Room," the delusional universe of Charles Kinbote in Nabokov's "Pale Fire." Powerful experiences and a piercing psychological authenticity can be found in these less expansive realms, but you don't really want to hang out there.

As my friend Isaac, who also read Abrams' post, wrote in an email about it, "There are books where the oppressiveness of the environment -- even if that environment is someone's head -- is so thorough and well-drawn that you just want to escape it and the book's length needs to reflect that. Shirley Jackson, for example. Or Flannery O'Connor. I mean, "The Violent Bear It Away" would be borderline unreadable if it were even 15 pages longer."

I haven't read "Fobbit" (yet), but if it's like most black tragicomedies, especially the best ones (and they don't get much better than Flannery O'Connor), it would begin to pall well before the 700-page mark. The bite of a dark comedy is savory in measured amounts, but too bitter in abundance. There are long comic novels, of course, such as "Tristram Shandy," but they tend to be good-natured, playful or variegated in tone.

More often, the comic novel -- and, especially, the sardonic ones -- is shorter because comedy requires a certain distance between the audience and the characters. Ignatius Reilly's travails in "A Confederacy of Dunces" wouldn't be funny if we took them as seriously as he does. The longer a novel goes on, the closer the reader wants to feel to the desires and sufferings of its central character(s). If that connection never forms, then the book that would have been a hilarious lark at 250 pages becomes grindingly trivial by page 400. If the reader does come to identify with the protagonist, then the misfortunes that would have elicited knowing laughs will instead seem far too cruel and bleak. Perhaps this caused the diluting of the humor in the overlong draft of "Fobbit," felt by the editors who passed on Abrams manuscript.

This balancing act applies to non-humorous fiction as well. Most historical novels are longish; part of the pleasure they give to readers is the illusion of being transported to another era. Valerie Martin's brilliant "Property," however, is an exception. The novel is narrated by the wife of an antebellum plantation owner in the American South, a woman whose myopic preoccupation with the subjugation of her marriage renders her oblivious to the misery and oppression of anyone else, most notably her husband's slaves. The novel is quite slender. You don't want to be in this woman's head for more than the 200 pages in which Martin places you there, but it's still an indelible visit I remember vividly 10 years later. "Property" is an exquisite reminder of the perils of self-pity and of how injustice often turns its victims against each other.

Often, when you read a novel that seems filled with unrealized promise, it's because it's too long. This often happens with successful writers who have the clout to squelch an editor's annoying requests for cuts. As Abrams admits, "hubris" convinces many an author that the usual constraints of the form don't apply to his masterpiece -- and after all, a certain amount of hard-headed self-confidence is required to write a novel in the first place. But, too, authors can never really know what the readers of their book experience, what it feels like to explore and discover it as a stranger. That's why good editors (and agents, who often act as a book's first editor these days) are invaluable to the creation of great books. Their contribution is evident in all the extraneous stuff that isn't bogging the novel down. Just because you can't see it, though, doesn't mean it isn't there.