DNC: The other speeches

Four ways of looking at the choice voters face in November 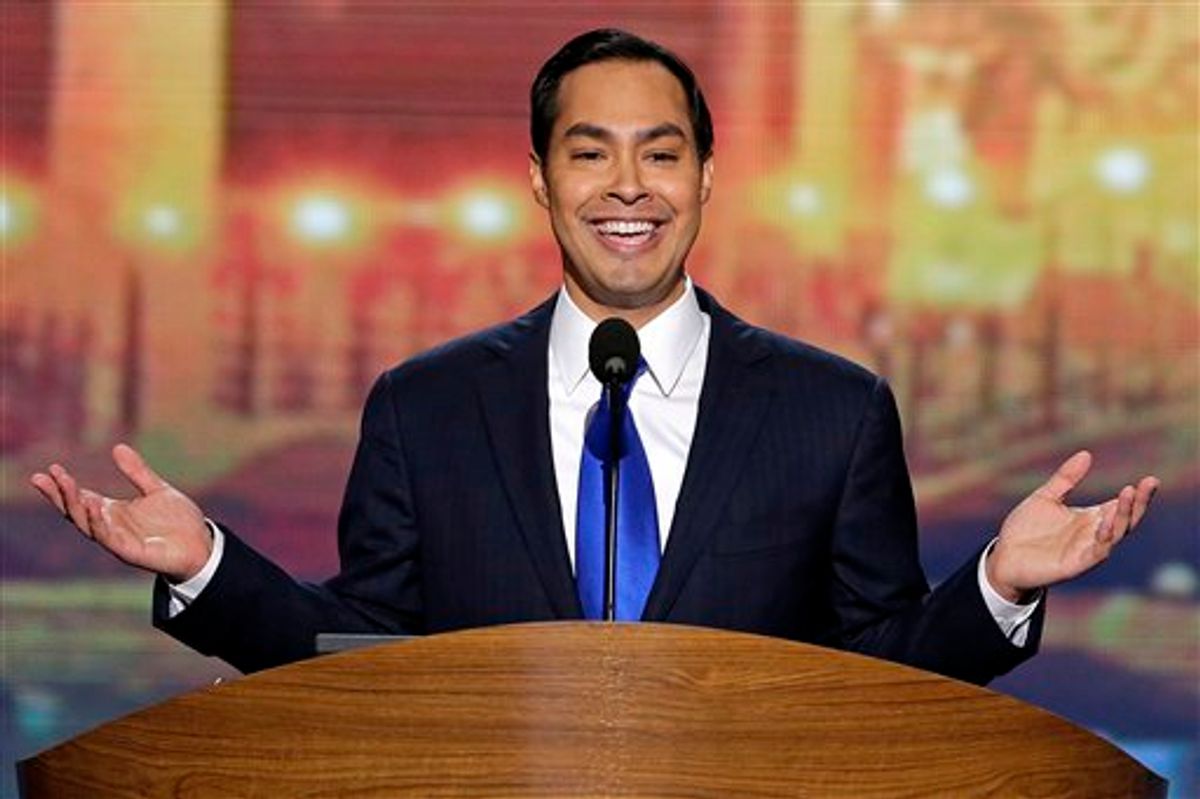 Day one of the Democratic National Convention showcased hopeful and unapologetic defenses of government's role in job creation, building a more equitable society and protecting the rights of women. The combination might be called Obamaism. By contrast, descriptions of Mitt Romney ranged from out-of-touch rich guy to greedy, scheming cipher. These four videos, paired with highlights from their prepared remarks, capture the tone.

Now, Mitt Romney, he lives by a different code. To him, American workers are just numbers on a spreadsheet.

To him, all profits are created equal, whether made on our shores or off. That's why companies Romney invested in were dubbed "outsourcing pioneers." Our nation was built by pioneers—pioneers who accepted untold risks in pursuit of freedom, not by pioneers seeking offshore profits at the expense of American workers here at home.

Mitt Romney proudly wrote an op-ed entitled, "Let Detroit Go Bankrupt." If he had had his way, devastation would have cascaded from Michigan to Ohio and across the nation. Mitt Romney never saw the point of building something when he could profit from tearing it down. If Mitt was Santa Claus, he'd fire the reindeer and outsource the elves.

Mitt Romney has so little economic patriotism that even his money needs a passport. It summers on the beaches of the Cayman Islands and winters on the slopes of the Swiss Alps. In Matthew, chapter 6, verse 21, the scriptures teach us that where your treasure is, there will your heart be also. My friends, any man who aspires to be our president should keep both his treasure and his heart in the United States of America. And it's well past time for Mitt Romney to come clean with the American people.

On what he's saying about the president's policy for welfare to work, he's lying. Simple as that. On his tax returns, he's hiding. You have to wonder, just what is so embarrassing that he's gone to such great lengths to bury the truth? Whatever he's doing to avoid taxes, can it possibly be worse than the Romney-Ryan tax plan that would have sliced Mitt's total tax rate to less than one percent?

I am proud to say that the Democratic Party believes that women have the right to choose a safe, legal abortion with dignity and privacy.

We are proud to have a president who stands with women; a president who signed into law one of the greatest advancements for women's health in a generation; a president who believes in a woman's right to make her own decisions. I know this president. And I can tell you that he cares deeply about the next generation of young women in this country—his daughters, and everyone's daughters. President Obama had the courage to stand with Sandra Fluke. Without hesitation, he defended her right to tell her story. Mitt Romney did not.

Twenty years ago, Joaquin and I left home for college and then for law school. In those classrooms, we met some of the brightest folks in the world. But at the end of our days there, I couldn’t help but to think back to my classmates at Thomas Jefferson High School in San Antonio. They had the same talent, the same brains, the same dreams as the folks we sat with at Stanford and Harvard. I realized the difference wasn’t one of intelligence or drive. The difference was opportunity.

In my city of San Antonio, we get that. So we’re working to ensure that more four-year-olds have access to pre-K. We opened Cafe College, where students get help with everything from test prep to financial aid paperwork. We know that you can’t be pro-business unless you’re pro-education. We know that pre-K and student loans aren’t charity. They’re a smart investment in a workforce that can fill and create the jobs of tomorrow. We’re investing in our young minds today to be competitive in the global economy tomorrow.

Mitt Romney, quite simply, doesn’t get it. A few months ago he visited a university in Ohio and gave the students there a little entrepreneurial advice. “Start a business,” he said. But how? “Borrow money if you have to from your parents,” he told them. Gee, why didn’t I think of that? Some people are lucky enough to borrow money from their parents, but that shouldn’t determine whether you can pursue your dreams. I don’t think Gov. Romney meant any harm. I think he’s a good guy. He just has no idea how good he’s had it.

We know that in our free market economy some will prosper more than others. What we don’t accept is the idea that some folks won’t even get a chance. And the thing is, Mitt Romney and the Republican Party are perfectly comfortable with that America. In fact, that’s exactly what they’re promising us.