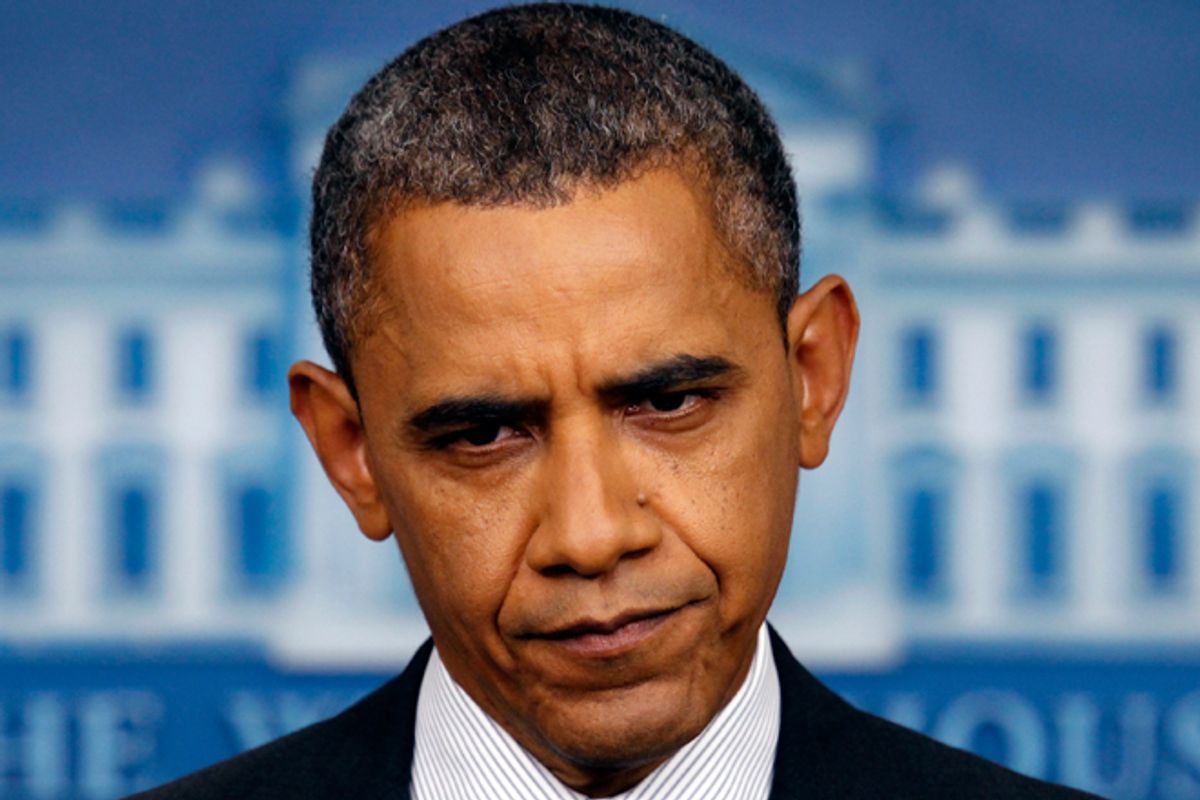 Pat Caddell and Doug Schoen, two ostensibly "Democratic" pollsters whose recent career seems to consist almost entirely of appearances on Fox News and Op-Ed pieces in the Wall Street Journal, furrow their brow at some recent polls and offer a dire warning to President Obama in today's Journal: Pivot to the center, or perish! Why can't he be more like Paul Ryan?

More than anyone else in this race, Paul Ryan has spoken of the need for fiscal discipline and economic growth -- two themes that have been largely absent from the Obama-Biden campaign -- which explains a large part of the Ryan-inspired Romney bump.

For his part, President Obama needs to change direction -- immediately and decisively. His campaign strategy has been to divide the country on the basis of class, demonize the wealthy, call for higher taxes and unceasingly attack Mr. Romney.

Putting aside the question of whether there has really been a "Ryan-inspired Romney bump," the admonition is likely to fall on deaf ears. Outside of Karl Rove and Paul Ryan himself, it's hard to imagine two people that President Obama would be less inclined to take advice from than Caddell and Schoen. Last November, they recommended that Obama step down and allow Hillary Clinton to take his place as the Democratic nominee for president. Strangely, Obama passed on that suggestion. And judging by the forceful defenses of Obamacare on the first day of the Democratic National Convention, Democrats have decided that they are going to emphasize the values that make them, well, Democrats.

And well they should. The notion that there is any "center" to pivot to is ludicrous. For decades, the Republican Party has been moving further and further to the right. The country is now more polarized that it has ever been, a fact that Obama was forced to reckon with, again and again, during his first term.

Caddell and Schoen appear to have forgotten that during the debt-ceiling negotiations, Obama put an offer on the table including concessions on social welfare spending that made his own party extremely anxious and upset. What could be more centrist than a mix of revenue increases and spending cuts as a path toward a more balanced budget? But that deal was torpedoed by none other than ... Paul Ryan. President Obama learned a valuable lesson. When the opposition party won't compromise at all, what's the point of being conciliatory?

TalkingPointsMemo reported an illuminating comment by Barney Frank from the convention floor yesterday that provides some good context for the discussion of whether Obama should be trying to reach across the aisle:

"Unfortunately, from the very beginning -- look, look at the contrast. George Bush came to us on the Democratic side in late '08 and said, we're in a crisis, we need your help -- and we gave it to him, very openly, very fully. Then Obama comes in to try to deal with the terrible situation he inherited from Bush and the republican media went into full partisan attack. [Senate Republican Leader] Mitch McConnell announcing his number one goal was to defeat the president.

If Caddell and Schoen were honest, they'd be forced to acknowledge that Obama already occupies the center. Republicans have moved so far to the right that to go any further toward them would require not simply stepping down in favor of Hillary, but changing his own party registration.