Are Dems shutting out labor?

Unions have long been the backbone of the Democratic Party. So why aren't they getting more love in Charlotte? 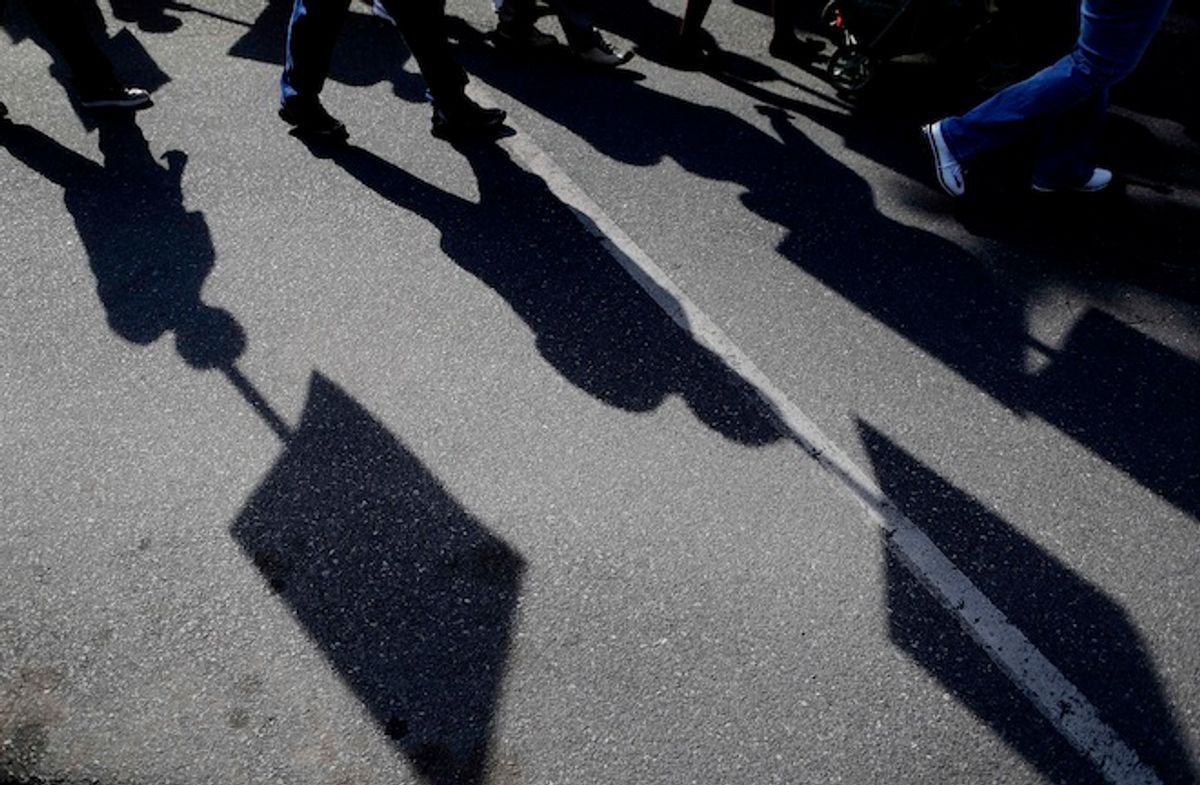 Demonstrators march in a Labor Day parade, Monday, Sept. 3, 2012, in Charlotte, N.C. Demonstrators are protesting before the start of the Democratic National Convention. (AP/Patrick Semansky)
--

As often as conservatives mention President Obama and “union thugs” in the same breath, you would at least expect them to be friends. But though the Democratic Party and labor unions have in recent history been joined at the hip, today unions are sleeping on the couch. The DNC provides just the latest evidence of a relationship that is frayed at best.

While according to the AFL-CIO, there are apparently 1,000 union members attending the convention as delegates, the labor movement just doesn't seem very visible here. Those 1,000 delegates aren't walking around swathed in union buttons and T-shirts. And unions themselves haven't contributed the large sums to the convention that they did four years ago, which came with prominent speaking roles and banners and such. The Laborer's International Union of North America (LIUNA), which spent $1.5 million on the 2008 DNC and was heavily involved in the event, isn't even participating in Charlotte this year. They're still spending money on their ground game, but the lack of convention enthusiasm is pronounced.

And though there have been labor leaders at the convention podium, their roles haven't been incredibly prominent. The UAW's Bob King got a prime-time role last night, but the campaign of course wants to highlight the story of saving autoworker jobs in Detroit. Meanwhile SEIU head Mary Kay Henry and AFL president Richard Trumka spoke as well, but their slots were relegated to the early hours of Tuesday and Wednesday's programs. And perhaps more tellingly, while Bob King made a very strong and clear case for collective bargaining, he only mentioned the word “union” three times. Neither Trumka nor Henry used the word “union” at all in their remarks. Contrast this to four years ago when SEIU's Anna Burger used the word "union" at least seven times in her 2008 DNC remarks  and it seems at the very least curious. What's more noticeable is that other speakers seem to be avoiding the topic of unions altogether.

This is in addition to other labor relations hiccups in Charlotte that may seem small but are symbolically seismic. First, there's the choice of Charlotte in the first place, the “Wall Street of the South” city in an anti-union, “right to work” state. Unions tried to paint the choice as an opportunity, but behind the scenes they strongly lobbied against the choice. Then, during the DNC itself, there was a screening of “Won't Back Down,” a new film backed by anti-labor activist Michelle Rhee, which is brimming with scapegoating and smears against teachers and teachers' unions. Although the event was not apparently sanctioned or sponsored by the DNC, it included remarks by DNC convention chair Antonio Villaraigosa and his fellow convention speaker and rising star in the party Cory Booker.

But the relationship between Democrats and unions was prickly long before Charlotte. Many labor-community activists were frustrated with President Obama for not showing up during the fight to preserve collective bargaining in Wisconsin, or later when unions backed a recall election against Gov. Scott Walker. And while Obama has backed the Employee Free Choice Act, which would make it easier for workers to form collective bargaining units, it was Democrats in Congress who ultimately torpedoed the bill. And President Obama's “Race to the Top” plan for education reform and his support for the unilateral firing of unionized teachers has long ruffled labor.

So while the Republicans are increasingly full-throated in their attacks against unions, Democrats are at best whispering their support. “Did you hear all the union bashing last week in Tampa?” Trumka asked a group of labor activists on Tuesday in Charlotte. Yes, but have we heard unions being equally championed in Charlotte?

When I asked Secretary of Labor Hilda Solis for her take on the president and the party's relationship with unions, she quickly responded, “This president has done more to move the agenda forward for unions — by appointing the first labor secretary who is from a working-class family, from a union household, but more importantly by revamping the Department of Labor by hiring over 300 new wage and hour investigators, by putting more investigators in OSHA ...” And the list could easily go on.

But good deeds on behalf of organized workers may be a proverbial tree falling in a forest drowned out by unprecedented attacks against unions in general and teachers' unions in particular on the part of Republicans and the right. Public support for unions is at an all-time low, in addition to already low levels of union membership nationwide. Democrats and the president have responded forcefully and frequently to the Republican attacks against women's rights. Why aren't Democrats fighting back against the union attacks, too?

In the party's defense, several labor leaders argued that almost every speaker at the DNC has spoken about workers, which automatically includes union workers. Sure, but just like some “education reformers” want to improve education while dismantling public schools, there are Democratic centrists who aspire to improve wages and opportunities for workers while dismantling unions — see, for example, Rahm Emanuel who had to take a break from union busting in Chicago to deliver his DNC speech. The Democratic Party should refute this destructive — and ineffective — vision and the broader GOP attacks on unions not just on paper but from the podium in speech after speech. After all, the DNC is giving repeated and prominent placement to speeches on marriage equality, women's issues and immigration reform. Labor leaders aren't exactly being thrown under the bus, just told to sit in back.

Randi Weingarten, head of the American Federation of Teachers, points out that the Democratic Party platform supports unions and the right of workers to collectively bargain, in addition to a number of other pro-labor platforms. And in my conversation with her, Weingarten focused on the big picture. “The choice is clear,” says Weingarten. “One party wants to eviscerate the rights of working people and their right to join together and have a voice.” In other words, the Democrats, whatever their pitfalls and predilection toward spinelessness, are still far, far better friends of working people. That's for sure.

“Do we get everything we want all of the time?” asks Arlene Holt Baker, executive vice president of the AFL. “No. But do we keep fighting? Yes!” And in fact it may be that the lack of a very public, visible presence is a strategic choice on the part of labor; realizing that it needs to soften its image amid increasing hostility and trying to protect Democrats, what unions may themselves acknowledge is an association that carries some baggage in the current climate.

But either way, the fact remains that too many Democratic leaders are bashing unions while many others fail to rush to labor's defense. If the lesser visibility of unions at the DNC is indicative of even an ounce of labor frustration with the president, unions would be wise not to bite their tongues and stick to the talking points and instead use the election as an opportunity to stand up to the president and demand that he stand up for organized labor.

In his thunderous speech last night, UAW's King reminded America, “Strong unions and collective bargaining lifted millions out of poverty and built the great American middle class.” Democrats must be reminded of this, too, and not allowed to take unions for granted in the economy or at the ballot box.