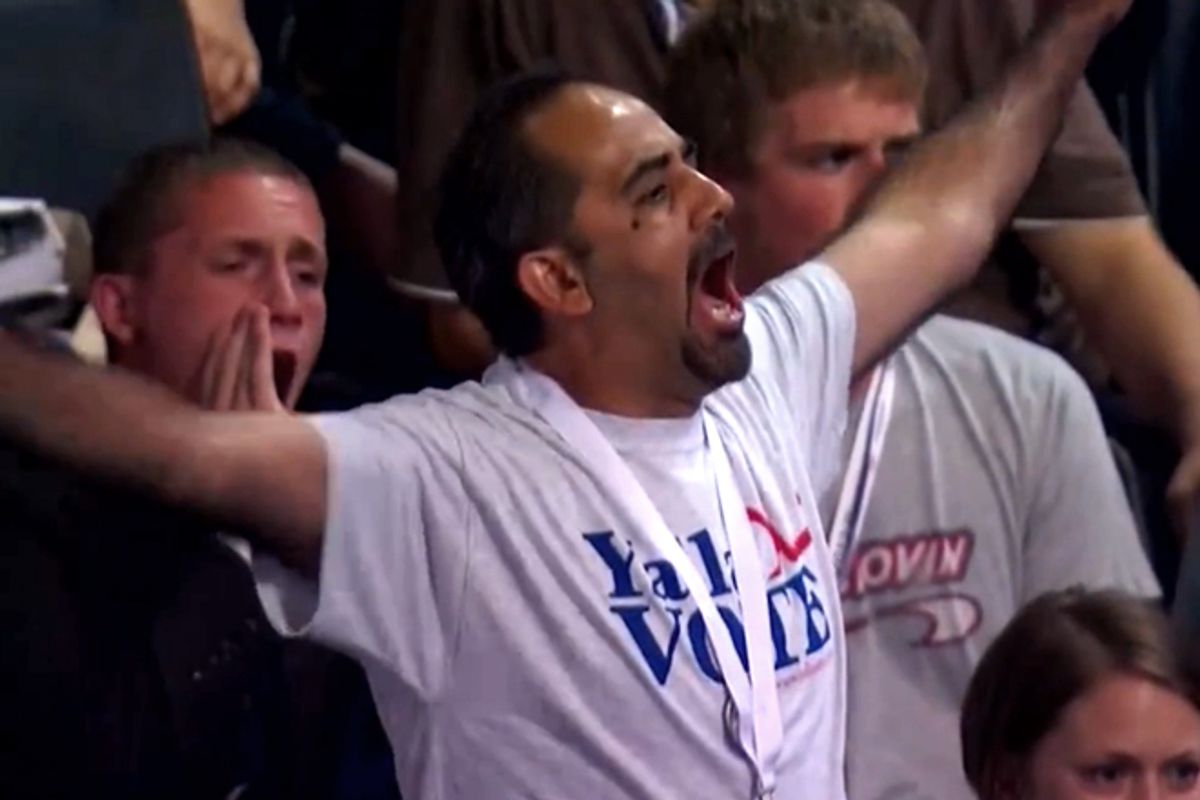 A still image from a video of the DNC floor fight over Israel.
--

CHARLOTTE, N.C. -- Yesterday's controversial voice vote at the Democratic National Convention to reinsert an amendment to the party platform recognizing Jerusalem as the capital of Israel has not only distracted from the convention's message, but has threatened to alienate the burgeoning bloc of Arab-American Democrats.

“It was hurtful to my community. I mean, people were feeling uplifted, and now they’re feeling deflated,” said James Zogby, the president of the Arab American Institute and a delegate who sits on the Platform Committee and chairs the Resolutions Committee. “The obvious indicator that this was really badly handled is that we're talking about it today, instead of talking about Bill Clinton and Elizabeth Warren. It was a blunder. A ham-fisted blunder."

When it was first approved Monday, the platform lacked the Jerusalem language, prompting attacks from GOP presidential nominee Mitt Romney, who called it “one more example of Israel being thrown under the bus by the president,” and even some Democratic senators. President Obama intervened, ordering the Jerusalem language to be reinserted, which put Los Angeles Mayor Antonio Villaraigosa, the convention chairman, in an awkward position yesterday afternoon when delegates, who had not been informed about the change ahead of time, vocally objected to the amendment on the convention floor. The move needed two-thirds voting in the affirmative by voice, but audio from the vote sounds like it was 50-50. He approved it anyway on the third vote.

The objection had more to do with the process than the language itself. “I chair the Resolutions Committee. We’ve had many controversial resolutions -- you talk them through,” Zogby said. “But Democrats don’t like these things being sprung on them and having them run down their throats. Whoever thought that we’d just do an aye vote and everybody would say, ‘yeah, great,' and we’d be done with it doesn’t understand the issue, but also doesn’t understand the feeling of Democrats. It was just handled very badly and kind of upended what should have been a positive story.”

Ismael Ahmed, a vice chairman of the Michigan Democratic Party and a former director of the Michigan Department of Human Services, said he believed the procedural move was “unprecedented.” “I was surprised by the reaction in the sense of how palpable the vote in opposition to this was,” he said, noting that there was far more dissent than possible from the small minority of Arab delegates in the hall. Ahmed said he was disappointed in the move from a party that has otherwise been increasingly active and good at bringing Arab-Americans into the fold. “We're asking the party to reach out to us in this campaign and note our presence in this country,” he said.

The big remaining question in the row is why it wasn't avoided. Both Zogby and Democratic leaders have said there was no debate or discussion on the lack of Jerusalem language when the draft platform went before the Platform Committee. “I do not for one minute believe that AIPAC [the pro-Israel lobby group] didn't see this. That's like telling me the NRA didn't look at the gun language on the Republican side or NARAL [the pro-choice group] didn't look at the abortion language on our side," Zogby said, noting that it would have been better to avoid the platform getting passed out of committee if people were going to object later.

While Ahmed said a new procedural challenge is “still an open question,” Zogby said he’s not interested in relitigating the issue. "It's language that everyone can live with, it's just the way it was done,” he said. Moreover, the platform language on the issue is essentially meaningless to people outside of the interest groups, which makes it even more befuddling that the party didn't see this coming. “If I had a nickel for every platform on the Middle East that didn't come to fruition, I'd be rich,” he joked.