What are we cheering for?

Don't let the conventions distract you from the real lesson of 2012: America is becoming increasingly undemocratic 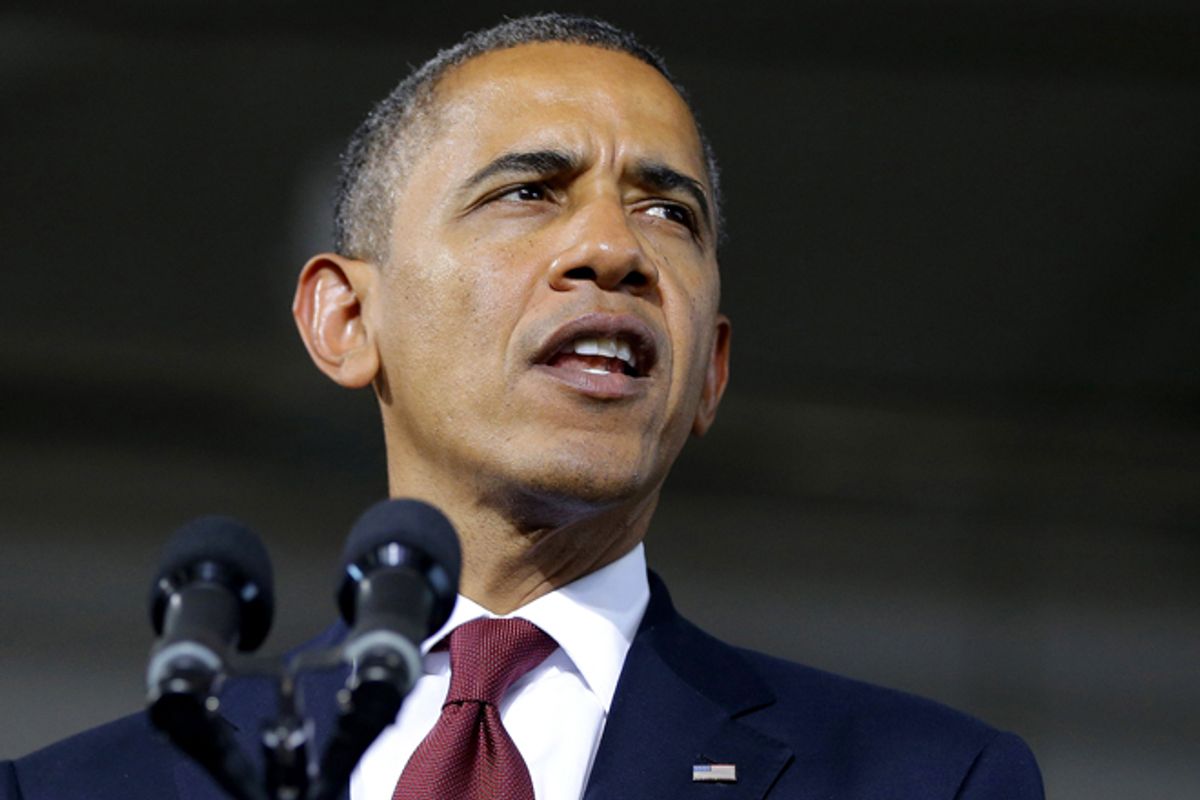 In 2008, the Democratic National Platform Committee spoke to the anger, pride and righteousness of civil liberties-loving Democrats. The platform proudly said that "we will ensure that law-abiding Americans of any origin, including Arab-Americans and Muslim-Americans, do not become the scapegoats of national security fears." In 2012, the Democratic National Convention dropped a Muslim prayer service from its online calendar after receiving criticism from conservative groups, and the FBI sent agents to question the Charlotte Muslim community about its event. Naturally, this year, the Democratic National Platform Committee doesn't mention Muslims or Arabs.

Meanwhile, writer JA Meyerson, attending the convention, overheard New York delegates derisively talking about Occupy Wall Street's fixation on drones and presumed whistle-blower Bradley Manning's torture and imprisonment. This type of talk, according to one delegate, was really alienating Democrats from Occupy Wall Street, who presumably should have been functioning as a support arm to the Democratic Party.

Physically, at the convention, a powerful national security apparatus is in place to kettle and intimidate protesters, keeping them to their free speech zones. Obama himself was nominated by Bill Clinton, a politician so corrupt that he made over $80 million in just 10 years in speaking fees from groups with policy interests before the government he ran, and whose State Department his spouse now runs. And on the floor of the convention, a plank demanded by the Israel lobby was inserted into the Democratic Party platform over the objections of the delegates, in a rank display of internal autocracy.

At the Republican National Convention in Tampa, the creepy subtext of corruption and authoritarianism was similar, but more overt. A Republican National Convention attendee was ejected from the party's convention for throwing nuts at a black CNN employee and saying, "This is how we feed animals." Republicans are pursuing laws to disenfranchise poor and minority voters all over the country. Meanwhile, Missouri Republican Senate candidate Todd Akin spoke of "legitimate rape," and high-level Republicans have argued WikiLeaks founder Julian Assange should simply be assassinated. The GOP has all the appearance of the party of white male supremacy, of white men who support economic and racial hierarchies, backed by violent imperial tendencies.

Ultimately, we're seeing that both parties are rotten. This rot is rooted in economics. Despite the bitter rhetoric, Obama and Romney are basically in agreement about how the country should be governed. Both Romney and Obama want to see the same core economic trends continue. These are, most significantly, a transition to an energy system based on hydro-fracking of natural gas and oil deposits (and some renewable energy), a large national security state, the sale of public assets to private interests, globalized financial flows, a preservation of the capital structure of the large banks, free rein of white-collar behavior and austerity in public budgets. This policy agenda is a reflection of the quiet coup that IMF chief economist Simon Johnson wrote about in 2010.

You can see significant policy agreements in both policy and personnel choices. For instance, Ben Bernanke, the leader of the Federal Reserve, which is the only institution with any latitude for policymaking, was a Bush appointee, but was reappointed by Obama. Top Romney advisor Glenn Hubbard argues Bernanke should be reappointed for a third term. And on a policy level, whether you call it Romneycare in Massachusetts, or Obamacare nationally, it's the same healthcare program. On trade, Romney pledged, in his economic platform, to sign three free corporate agreements on day one of his administration, those with Colombia, South Korea and Panama. The Obama administration signed them last year, and brags about them in the Democratic Platform. Both candidates ardently support the Trans-Pacific Partnership, the secretive NAFTA on steroids treaty being negotiated right now by Obama's trade representatives.

And while much ink has been spilled on the lies contained in vice-presidential candidate Paul Ryan's speech, the Obama campaign is equally dishonest. The premise of the Obama campaign is that the country faces a choice, between a middle class-driven economy and an economy driven by inequality and the rich. But under Obama, inequality has increased even faster than it did under Bush. According to housing finance journalist Dave Dayen, the Obama administration's platform plank on housing, which nearly all economists agree is key to the recovery, "makes Paul Ryan's convention speech look scrupulously honest." Obama claims to have helped 5 million homeowners restructure their mortgages; the real number is closer to 1 million, and a quarter of those have already redefaulted on their loans.

Whether Romney wins or Obama wins, both Social Security and Medicare are on the table for deep cuts. Romney is explicit about this, whereas Obama couches this in terms that liberals will not understand. When he talks about popping a blister of partisanship by winning an election, what he means is cutting a deal with the Republicans to restructure these programs. Sen. Dick Durbin has been telling reporters that the Obama administration is going to give the entitlement-gutting Simpson-Bowles budget framework another try if he wins, and close Obama advisers are looking for a grand bargain on taxes and entitlement reform. Obama already tried to raise the Medicare eligibility age and cut Social Security benefits during the debt ceiling negotiations. Meanwhile, corporate titans and Democratic elites like Andy Stern and Steny Hoyer are already gathering to put this framework into place in the post-election environment, regardless of who wins.

There are some differences between the candidates, of course, though it's difficult to know what they are since neither candidate is particularly honest about his intentions. For instance, depending on the messaging frame the Obama campaign chooses, Mitt Romney might be a flip-flopping moderate, or a hard-right extremist. How will he act as president? It's hard to know. Certainly, Obama didn't govern as his supporters in 2008 expected, breaking significant campaign promises, such as a pledge to renegotiate NAFTA or raise the minimum wage.

The larger consequences of having two candidates who share similar policy ideas, who both believe in police state tactics to suppress whistle-blowers, who both are driven by their allegiance to a wealthy political class, are not acknowledged. It isn't that American democracy is at risk. American democracy was at risk, perhaps four or eight or 12 years ago. Today, speaking of democracy in America is quaint -- the country increasingly resembles an undemocratic state, with a free wealthy elite and a much larger poorer populace, constrained by monopolistic corporations that collude with the government.

In fact, the lesson of the 2012 election, if we are honest with ourselves, is simple, and disturbing. America is shifting from a democracy into an authoritarian state. This authoritarianism is soft, with some remnants of an open civil society, and there is as yet no violence used against domestic political actors. Nazi Germany we are not. But after 14 years of political crises, starting with the impeachment of Bill Clinton and the extreme financial deregulation of the late 1990s, it's time to face the music about what kind of country we have become. The 2012 election is more than a contest of cynicism and disillusionment, it's an unveiling of a new quasi-authoritarian political system in place of the traditional norms of democratic deliberation.

In this system, there are democratic spaces, but those are restricted to those who fund super PACs. Everyone else is sitting in a different kind of polity, a weird space where there is the possibility of voting, but no possibility of that vote mattering. Obama OMB chief Peter Orszag exemplified this contradiction when he called for mandatory voting, while at the same time calling for depoliticized commissions insulated from voters to make key policy decisions. This is the new model, the form of democracy without the content. Stripped of roughly $7 trillion of wealth in the form of lost home equity over the past four years, the broad mass of Americans effectively have no right to participate in policy deliberations, no access to an increasingly consolidated media, and, hemmed in by a corporate Supreme Court, less and less access to the courts. A peaceful attempt to petition the government for redress of grievances in the form of the Occupy movement was destroyed through the use of paramilitary police forces, mostly commanded by Democratic mayors. The toenail clippings of this new state are the 2012 elections, dominated by big money and a political class led by corrupt actors.

There is hope. Even authoritarian systems derive their legitimacy from the consent of the governed. That's why the 2012 election drives such bitter rhetoric -- the appearance of a contest makes the public believe it has a choice in its future, and that more radical measures are unnecessary or hopeless. Nonetheless, the public is losing faith in a rigged money-driven electoral system, which is a step toward reclaiming power. Next is a recognition that it is the elite political class as a whole that is the enemy, including well-marketed corporate figures like Barack Obama, and that it is political radicalism and not liberalism or progressivism that creates the bargaining leverage necessary to force corrupt elites to concede some ground. There has also been experimentation with new models of political organization, most prominently the Occupy Wall Street phenomenon, WikiLeaks and Anonymous, as well as models in other countries.

But the idea that America is shifting into an authoritarian system is a difficult truth to handle, as it flies in the face of an endlessly marketed notion of progress and deep-seated political rhetoric about American exceptionalism. Political elites are also very good at dishonest excuses. In her convention speech, for instance, Michelle Obama remarked that change is hard, and slower than we might like. Many Democrats point out that Republicans block change at every turn. But this is misleading -- in fact, Obama has turned out to be a transformative president, and has in fact solidified a bipartisan consensus in favor of a sweeping political change, for endless bailouts and endless war.  Liberals do not want to recognize that this is his agenda, and that this agenda is designed to turn America into a society where democracy exists only in small rooms of elites. Better to say there hasn't been enough change, than to recognize the radical change that has occurred.

Making the case that our systems are not what they are marketed as will be difficult. Americans overwhelmingly still, for instance, believe in homeownership as a virtue, despite the obvious bleak future on that front. They still think that paying crushing, predatory and illegitimate mortgage and student debt is the moral thing to do. They will not let go of their illusions without more personal experience in the malevolence of the system, denser organizational networks of dissident elites, and a possible alternative they can support. Liberal Democrats and union officials will not shake their faith in Obama, insisting on lying for him and the Wall Street-friendly Democratic establishment he represents. But these illusions are not sustainable, and neither is the increasingly authoritarian American state. It is a small group who realize this fundamental truth, but every day, more are waking up.

In the meantime, enjoy the Democratic Convention. Last week's brain-dead display of corrupt kleptocracy in Tampa at the RNC was, aside from rank, not particularly entertaining. At least the Democrats are making an effort of putting on a show.