Pick of the week: "Bridesmaids" gets a meaner, smarter big sister 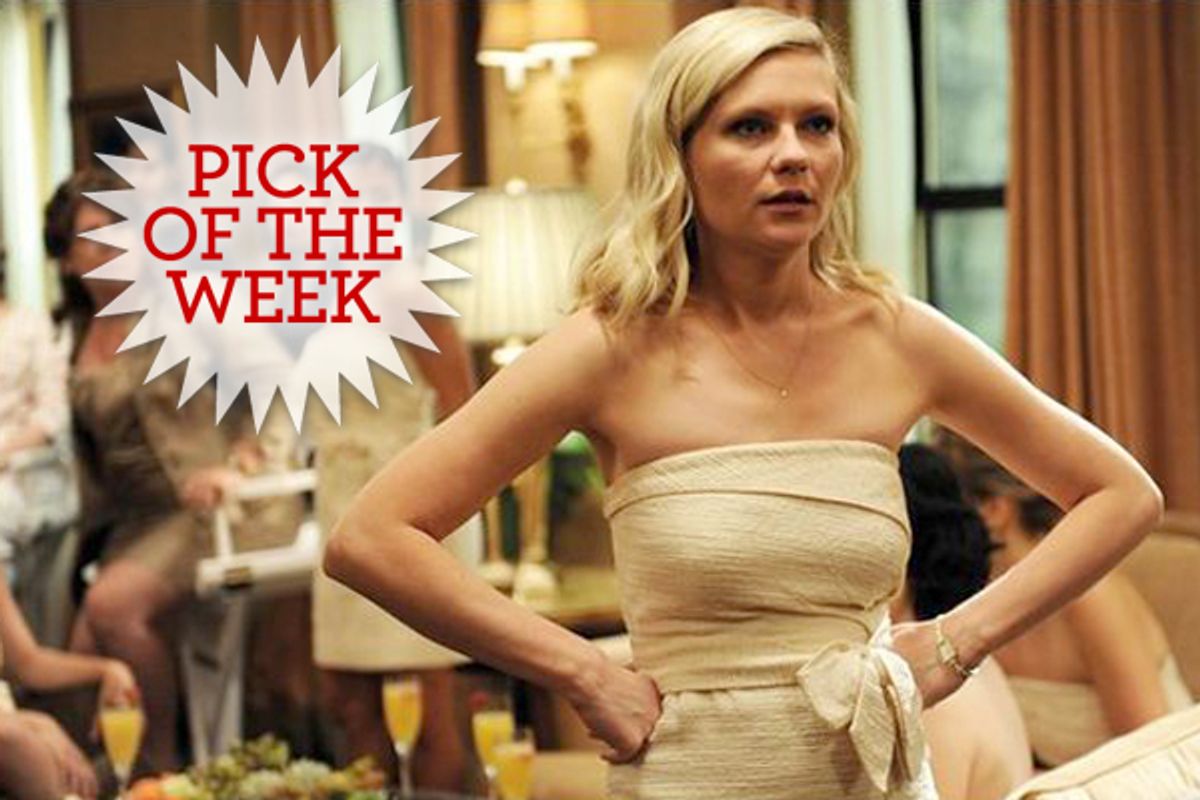 If I tell you that writer-director Leslye Headland’s debut film, "Bachelorette," is a wedding comedy built around ruthless female characters and intelligent but foulmouthed dialogue – well, you’re already confused, right? Is it a sequel to “Bridesmaids,” that summer 2011 hit that elevated co-writer and star Kristen Wiig to the A list and became a symbol of Hollywood feminism and a talking point in the endless (and moronic) debate over whether women are funny? Or is it just a shameless knockoff? Well, the correct answer is neither. “Bachelorette” is like the meaner, smarter sister to “Bridesmaids,” the sister who just got back from a debauched first year of college with black eyeliner, a taste for cocaine and an appetite for drama (in all senses of the word). Sound appealing? Yeah, to me too. But don’t claim you weren’t warned.

Furthermore, you must be a total sexist creep for even raising the comparison. What’s wrong with you? Did people ask questions like that about the endless late-2000s torrent of similarly themed Apatow-inspired comedies about dudes in their 30s and 40s facing life crises? OK, yeah, actually they did. And, yes, the similarities between “Bridesmaids” and “Bachelorette” are legitimate and unavoidable. Both exploit and subvert our expectations about female relationships, and both explore the way women themselves use and abuse various feminine archetypes: the fat girl vs. the skinny girl, the crazy slut vs. the airhead. In all seriousness, though, “Bachelorette” is very much its own creation, and if your tastes run in the right malicious direction, you may vastly prefer it.

On the other hand, “Bachelorette” has already inspired some of the most overwrought hostile reviews of recent years, including one that pronounces the lead characters played by Kirsten Dunst, Lizzy Caplan and Isla Fisher to be the irredeemable bitch-spawn of Darth Vader and Hannibal Lecter. That’s a little over the top, in that these three ladies don’t actually eat anyone or rule over a galactic empire, but a better answer might be that if you don’t like them, they might have some suggestions about what you can do. What really drives some people nuts about “Bachelorette,” I suspect, is that the raunch, the drugs and the gross-out gags, although they certainly exist, really aren’t the point. Headland has written a sharp, ambitious, fast-paced comedy of manners, which is less about delivering big laughs than exploring its characters and their interactions.

Headland comes to her first film from a theatrical background, and once you know that, the tone of the movie makes a lot more sense. There are bits of David Mamet meanness and Neil Simon farce in “Bachelorette,” filtered through a younger female perspective but certainly not scrubbed of edge. Even her film touchstones, it seems to me, are a little old-fashioned. If she is clearly trying to channel the spirit of John Hughes (perhaps a coked-up and promiscuous John Hughes), her discursive, self-involved, shamelessly New Yorky characters also suggest Woody Allen and Whit Stillman.

Dunst, the one-time ingénue of Sam Raimi’s “Spider-Man” trilogy, has already demonstrated her capacity for drama in Lars von Trier’s “Melancholia,” but here she goes in an entirely different direction as Regan, the ice-blond tyrant at the center of this wedding maelstrom. Regan is like the nightmare version of what you think someone like Dunst might be like in real life – intelligent but entitled, officious but massively egotistical. She’s been asked to serve as maid of honor for her high-school friend Becky (Rebel Wilson) -- the designated "fat girl" in their group of friends – who has no idea how bitter Regan is about watching her get married first. But the other two women summoned as bridesmaids, the permanently trashed and oversexed California bohemian Gena (Caplan) and the dim and depressed shopgirl Katie (Fisher) definitely do know. None of the four have quite forgotten that Becky was the frequent butt of their cruel humor, and was known as "Pig Face" in high school.

I’m going to suggest, somewhat tentatively, that "Bachelorette" is most unlike “Bridesmaids” because it fundamentally isn’t a comedy at all, but something closer to a dense, dark character drama tarted up in high heels and a short skirt and dosed with pills and coke. Can a movie this raunchy, that’s about women being this mean to each other, really be a feminist work? I think there's no doubt about it. As Caplan said during a post-screening Q&A at Sundance, playing a woman in an ensemble comedy usually involves trying to contain and control the wild and crazy guys, whereas Headland’s vision of rampant female ego and libido is exactly the opposite. Yes, Regan, Gena and Katie all develop romantic possibilities over the course of their long night -- the best of these is Gena's awkward, delicate rekindling of a long-lost high school flame (Adam Scott) -- but in all their flawed, hypocritical, horndog realness, they are the authors of their own destiny.

"Bachelorette" opens in theaters this week, and is also available on-demand from cable and satellite providers, Amazon, Google Play and iTunes.