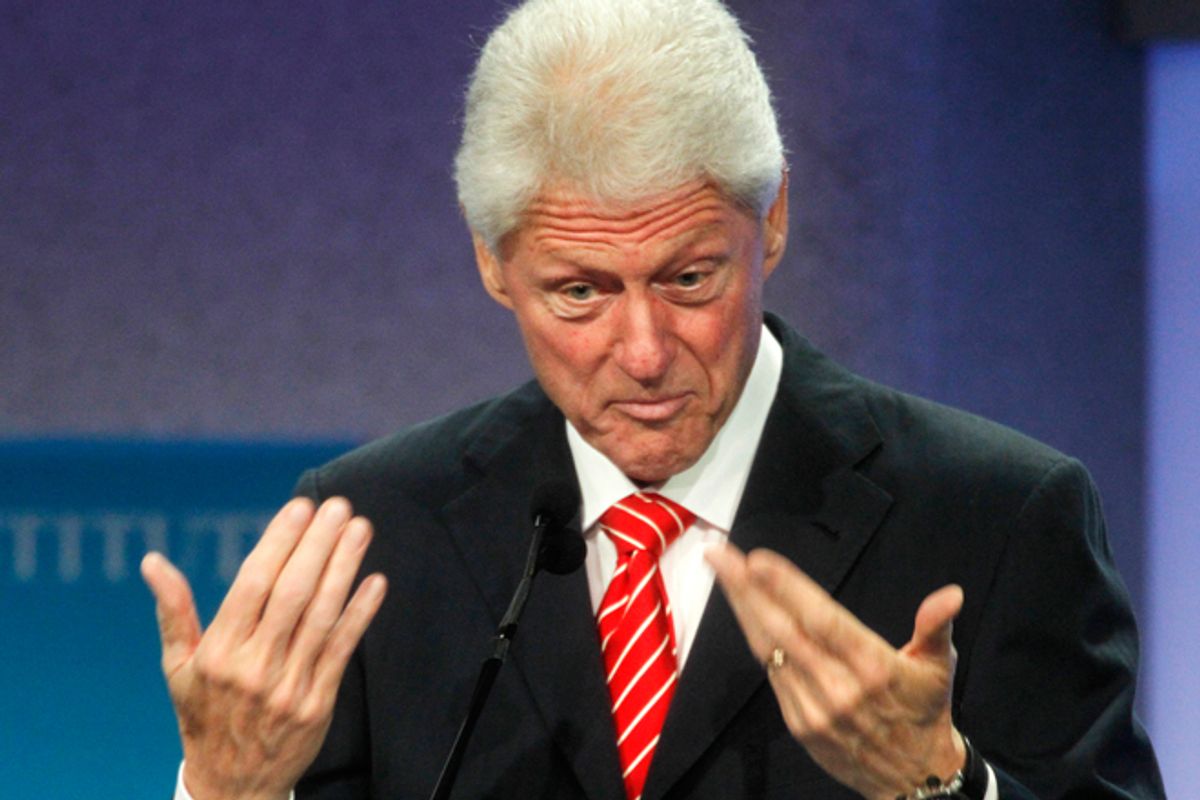 So did you see the AP fact-check of Bill Clinton's long speech last night? It's sort of amazing. Like, for example, while Bill Clinton claimed that the Romney/Ryan campaign is dishonest, the reality is MONICA LEWINSKY.

CLINTON: “Their campaign pollster said, ‘We’re not going to let our campaign be dictated by fact checkers.’ Now that is true. I couldn’t have said it better myself — I just hope you remember that every time you see the ad.”
THE FACTS: Clinton, who famously finger-wagged a denial on national television about his sexual relationship with intern Monica Lewinsky and was subsequently impeached in the House on a perjury charge, has had his own uncomfortable moments over telling the truth. “I did not have sexual relations with that woman, Miss Lewinsky,” Clinton told television viewers. Later, after he was forced to testify to a grand jury, Clinton said his statements were “legally accurate” but also allowed that he “misled people, including even my wife.”

How is this a checking of a fact? I mean, what? THE FACTS: REMEMBER WHEN BILL CLINTON GOT A BLOW JOB GROSSSSSSSSS.

The rest of the thing is basically the author's opinions about how wrong Clinton's arguments were. (The author is the talented reporter Matt Apuzzo, and I guess it turns out his politics are pretty hilariously dumb -- "The problem with compromising in Washington is that there are few true moderates left in either party" -- even though he is seriously a very good reporter.) And no "facts" are refuted, just counterarguments (based on very silly Washington, D.C., conventional wisdom, mostly) presented. Because there weren't really falsehoods in the speech, which is why the other big MSM fact-check organs found Clinton's speech mostly factual. Bill Clinton is not an idiot and he was not going to go up there and use incorrect numbers and statistics!

The weirdest part of the AP's bizarre "fact check" is that the entire thing would've been totally kosher if it just hadn't presented it as a "fact check." It's analysis. As an "analysis" it's still sort of petty and unconvincing, but it's no longer incomprehensible and dishonest. So, yes, according to this AP account, Bill Clinton was incorrect to say Republicans stand in the way of compromise, because in this reporter's opinion "both sides" are to blame for failure to reach "grand bargains." But here is a FACT CHECK for you, AP: It is dishonest to refer to this reporter's "take" on Washington dysfunction as "THE FACTS."

There are some very obvious limits to what "fact-checking" can accomplish in terms of improving political discourse and punishing mendacity. A speech that is designed to stand up to a rigorous fact-checking is still quite capable of being entirely dishonest. (In fact, politicians do this basically 100 percent of the time; what bewilders people about the Romney campaign is that they are dishonest and they constantly screw up checkable facts.) But exposing that sort of dishonesty requires a different journalistic tool than the "fact check." Traditionally, newspapers would have to do this in the opinion section, or maybe in an "analysis." But you don't get to call it a "fact-check" if you're disputing a subjective argument with more subjective arguments! (And non sequitur!)