Guillermo Rigondeaux was one of Cuba's best fighters before he defected in 2009. He was also one of its saddest 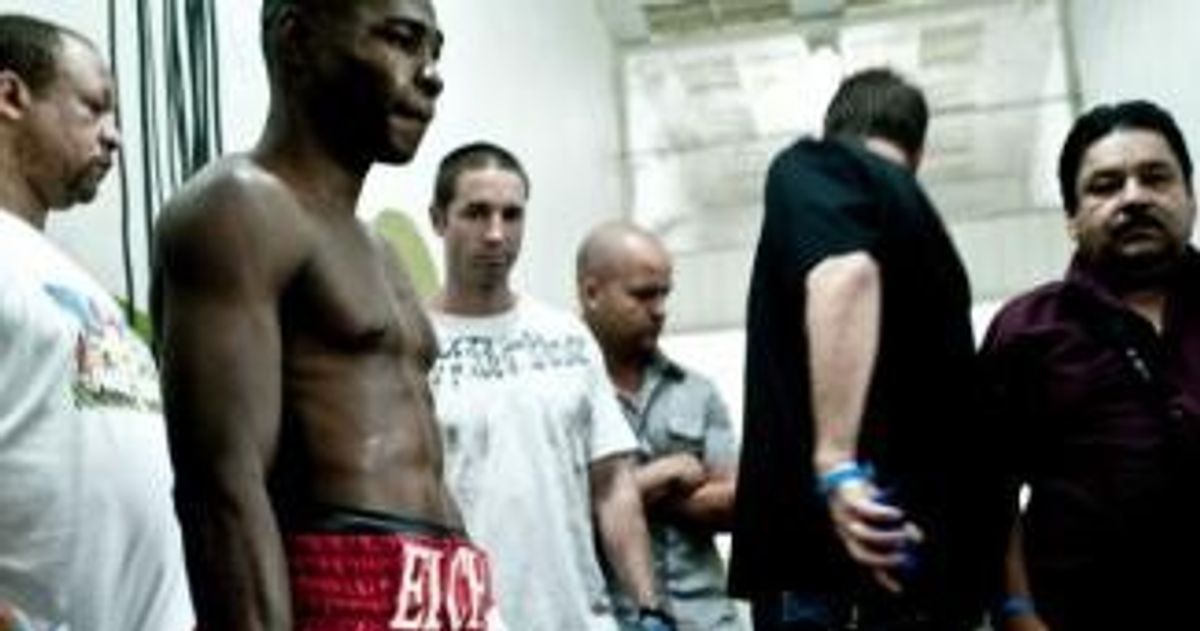 In Old Havana, the street names that pre-date the revolution offer a glimpse into the city's state of mind. You might have known someone who lived on the corner of Soul and Bitterness, Solitude and Hope, or Light and Avocado. When things changed in Cuba, the names were changed as well, and new signs went up. Ask for directions from a local today, though, and you’re likely to hear the old names. Those names meant something personal and not easily forgotten to the people who lived on those streets. That avocado grew in the garden of a convent. That hope was named for a door in the city wall before it was torn down. That soul refers to the loneliness of the street’s position in the city. Sometimes these streets lead to dead ends; others lead to the doorsteps of cathedrals.

While guidebooks might tell you that time collapsed here like wreckage, another theory says that in Latin America, all of history co-exists at once. The mystery of Cuba’s place in the world today has never been anything like a riddle. When Castro was put on trial and asked who was intellectually responsible for his first attempt at an insurrection, to all his followers delight, he dropped the name of a poet.

I hitched a ride most of the way to the boxing gym with a black Cuban who gave me the dime tour of the greatest potholes in Havana. He was serenading the potholes before we could even see them. Outside my window were some people lining up and police officers and women in curlers standing on their balconies. “Be careful wherever you stop in Havana,” the driver warned, “there will be a lineup behind you in five seconds.” There’s a pause after he tries to determine whether I find this funny or sad. Tourists snapped photos of an ornate building where I once visited a friend; we had coffee while his family complained incessantly about the broken stairwell and leaky roof. Finally the harbor came into view; a cruise ship moves slowly towards it, through waters that were unsafe to fish in the early 20th century because of all the bodies that had been dumped into it from the Morro. A trumpet player on the Malecón blew at sea-puddles on the pavement. The whole colonial theme park, in short, but with a policeman checking a man’s identification on the sidewalk.

The driver lights a cigarette and reaches back to press play on a broken down boom box in the back seat, and we hear Nat King Cole over-enunciating in Spanish. The driver imitates it and grins wide, “Pen-sannn-doh. I luuuv it.”

“What part of Havana is she from?”

“In the old days it was illegal to sleep in Vedado without a pistol under your pillow.”

I watch him enjoy this fact. What other people could get away with suggesting that everyone deserved to have Havana as their hometown? I ask him if he’s a Habanero.

“Of course. My friend, did you know they needed three tries to find Havana before they got it right?” he asks me.

I smile and ask him for one of his cigarettes.

“Did you know that originally Cuba was named Juana after Juana La Loca, the insane daughter of Ferdinand and Isabella? They were Columbus’s patrons. All that little girl’s relatives have been screwing with our lives ever since. We can stop for a beer and I could tell you more.”

We share an uneasy silence for a moment or two.

“I could pick you up after your training. My friend, I know some great girls I could introduce you to. Any color you like. I have a business card. Very nice, clean girls.”

My boxing gym is located in what was once the cheapest red light district in the city. These days most of the prostitution is run by cab drivers; after the revolution most of the prostitutes were "re-oriented" into cab drivers. Girls still stand in the same doorways staring at passersby and the men still strut down the same narrow streets, but they have different intentions and reasons now.

At times I’ve been mistaken for a Cuban, but certainly not if I’m walking anywhere. Initially there were a lot of mixed looks. If I had my gloves out hanging off my bag some of the small kids happily raised their fists at me; their older siblings eyed my belongings. When I first came into the area at the age of 20 and realized how closely it was monitored by thieves, knowing that I'd be there every day, I made my peace with the fact that I’d be robbed soon enough and probably with the use of a blade of some kind. I gave into whatever toll the neighborhood expected from me and just said hello to anyone who looked me in the eyes no matter who they were. There isn’t much of anything worthwhile you can get without trusting in it.

Guillermo Rigondeaux showed up at the gym again, but something was different. Rigondeaux, since his failed defection in Brazil the previous summer, had been forbidden to speak with any of the other athletes in Cuba; he'd eventually defect successfully two years later. As usual he never bothered to speak with anyone at the gym and people seemed similarly hesitant to acknowledge him. Anyone might be watching. Anyone could report it to any block in Cuba (each block in Havana had a CDR to report suspicious activity to). He stayed under the shade of the bleachers and watched the children laughing and shouting as they kicked a soccer ball around before their training got rolling. One of the kids felt the stare and went over to see what was wrong, tugging at his shirt. Rigondeaux idly slid his hand over the boy’s head.

Brea, my coach that week, paused when he noticed this. When I dropped my hands thinking we’d go over to say hello, Brea swung at my cheek and growled, “Looka for me! Looka for me! Remember, leedle-by-leedle. He won’t stay long.”

This was nearly as confusing as it was ominous. Neither is really my coach’s style. Another coach blew his whistle and the kids found their own spots to begin shadow boxing. Hector Vinent, another two-time Olympic champ from Barcelona and Atlanta, came out of the bathroom with a sledgehammer in one hand and lit a cigarette with the other.

Some tourists came in to take photos, apparently without noticing Rigondeaux. One of them bumped his shoulder by accident. Before the tourist could apologize, Rigondeaux patted him on the shoulder affectionately and left. I could never really get my head back into training after I’d seen him.

Brea walked me part of the way home through the baking maze of Old Havana. He told me that while all of Rigondeaux’s former teammates on the Cuban National Team were forbidden from consorting with him, they sympathized completely with his reasons for trying to leave. His close friends had been forced to avoid his home. The state took away the car it had given Rigondeaux and the only reason they didn’t impound his home was his wife and children. Brea talked about how much Rigondeaux had loved and cherished that little car, which had been his favorite possession in the world. Even among Olympic champions, a car was a rare gift from the government. “But with every traitor,” Brea added, “the government must worry about those that follow after them.”

Someone on a roof passing a bottle around with a group of friends called out Brea’s name and Brea held up his fist and winked.

“So many distractions in my life, Brinicito. Where were we?”

“Do you think he’s a traitor or just the government?”

Brea smiled. The last few days' lessons had focused on the art of cutting off the ring. Cornering opponents. Boxing them in. “Have you been in this area at night?” he asked me.

“It is dangerous,” Brea agreed. “It’s dangerous for me and you see how many people know me. But maybe you can understand how my answering some of your questions about this subject is like walking around a similar neighborhood at night wearing a Rolex watch.”

I apologized, and Brea continued.

“El Comandante has said he may deny Cubans from participating in other championships as punishment for Rigondeaux’s selfishness. In Brazil during the Pan Am games Rigondeaux and his teammate were found with prostitutes when he was arrested. Officially I don’t think that information is being released. Teofilo Stevenson has publicly asked that Rigondeaux be excused. This will of course not happen, but these are interesting developments. Speaking of developments, look at that niña leaning against the church! Dios mio. What do you think of Cuban papaya? I prefer it to that of the tourist.”

If Brea ever worked in a bar and mixed drinks as well as he mixes subjects he might’ve become the worst bartender in the world. Two more women— mother and daughter most likely—stroll past. Brea hisses at them until they look back.

A fruit seller with a cart across the street follows Brea’s attempts at seduction and snaps his wrist in praise.

“Okay, it’s out of my system for another few blocks.”

“Will Rigondeaux ever fight again?” I ask.

“Quizas. Not here. And when he leaves, he leaves behind a wife and child with a troubled, difficult situation. Anyone associated with his reputation will suffer. The government likes to settle scores. They have eyes everywhere. Police, spies, neighbors. Employment opportunities. Everything can be driven into the ground. The home of Rigondeaux’s family can be taken. So he will have to watch his mouth if he makes it to La Yuma successfully. All Cubans are cursed from birth. Cursed if you stay, cursed if you leave.

“This situation is no more sad than behind any other door we have walked past from Trejo until now,” he continued. “We’re all born into struggle in this place. It’s normal. Suffering is a way of life. There is nothing special in Rigondeaux’s tragedy except that he can escape it and create a new tragedy with fame and fortune but without his home, without his family and friends to share it with.”

I point out the obvious: Brea is still here, he stayed. Does he consider Rigondeaux a traitor?

“A traitor to what? To who? The greatest pride for a Cuban is being a father and a Cuban’s biggest disappointment is not having any ability to provide for his children. So what important principle is this Cuban boy betraying? Who turned his back on who? You explain to me how I should be able to keep a straight face defending the country I love against Rigondeaux’s legacy? We can have a drink in Chinatown, and you can buy us some fortune cookies to answer all of your questions.”

Brin-Jonathan Butler's work has appeared in ESPN.com, Deadspin, The Wall Street Journal, Salon, Vice, and The New York Times. Butler's documentary, Split Decision (spitdecisionfilm.com), examining Cuba and the United States through the lens of elite Cuban boxers faced with the decision to remain despite the lure of millions, or chase the American Dream from a smuggler's boat, is looking to premiere at the Tribeca Film Festival this spring.