After Republicans' blatant dishonesty in Tampa, Democrats hew toward truth and win the fact-checking wars 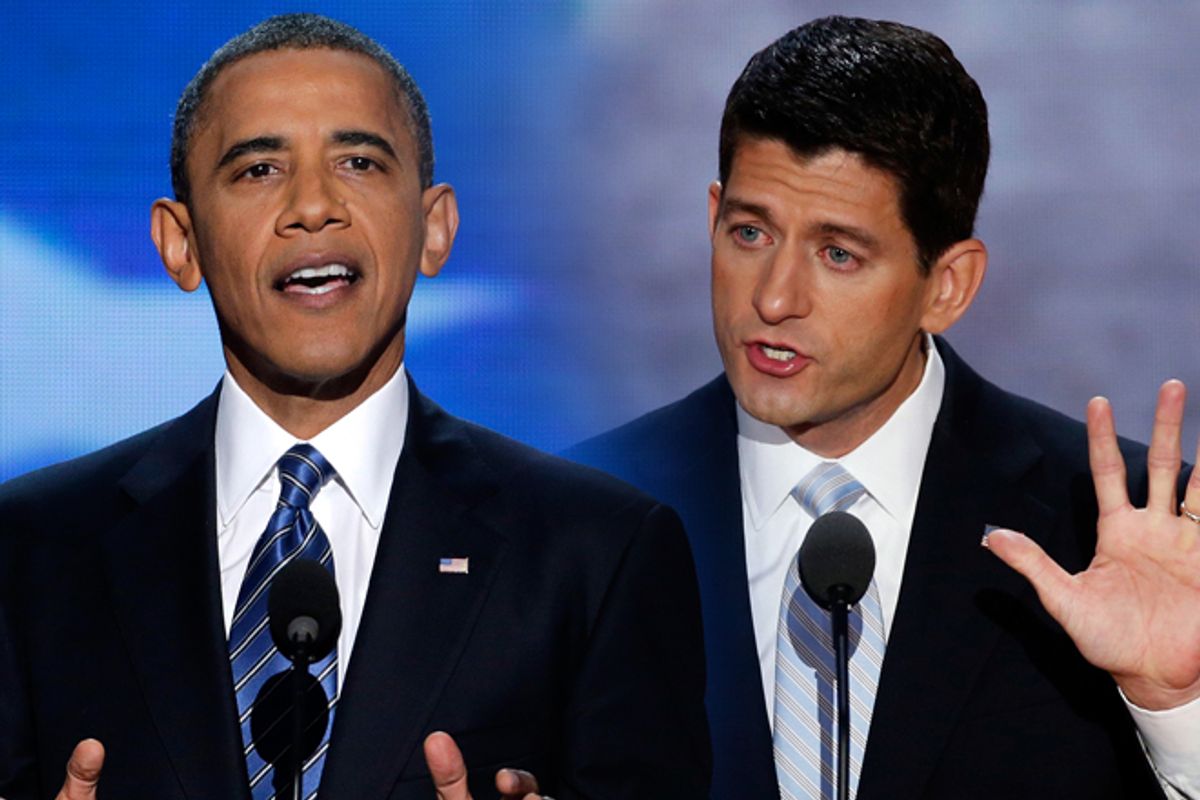 The speakers at the DNC did plenty of things at their convention: explaining the economy President Obama inherited and the steps he took to turn it around, standing up for the rights of voters and women and gay people and immigrants, and outlining a clear vision of America based on the fundamental idea that we're all in it together.

But there's one notable thing speakers at the DNC barely did: lie.

Speaker after speaker stood up to praise the president's record and critique Mitt Romney's rhetoric with the sort of straightforward honesty that Americans should expect from political campaigns.  That’s not to say the campaign didn’t spin the facts.  Every political campaign massages the truth toward its own advantage and the Obama campaign is no different. But unlike Republicans who spouted known lie after known lie at their convention, pretty much every assertion at the DNC can be traced to some kernel of truth.

When, in his DNC speech, the president accused Mitt Romney of wanting to hand over Social Security to Wall Street, while it’s true that the Romney campaign has denied this agenda currently, the fact is both Romney and Paul Ryan supported privatizing Social Security in the past.

When the president said his own plan would “cut our deficits by $4 trillion,” he didn’t mention that was a 12-year total, not a year. But this is a sin of omission, not a bald-faced lie.

And when almost every DNC speaker says the president’s policies created 4.5 million private sector jobs in the last 29 months, that is true. It's a fact. Yes, it is a conveniently selected fact — the campaign wants voters to blame Republicans for the recession and give Democrats credit for the recovery. But it is rooted in an honest premise that President Obama couldn’t be expected to fix the mess of a massive recession on Day One.

And perhaps more important, while the Romney campaign has made clear it will "not let our campaign be dictated by fact checkers," the Obama campaign has paid attention to feedback and corrected itself to hew to truth. As one example, since fact checkers like Politifact have said that saying Romney will "end Medicare as we know it" is accurate but just saying he will "end Medicare" is a misrepresentation, Bill Clinton used the more accurate version in his DNC remarks. The Obama campaign is trying to seriously outline the choice in this election with attention to facts, while the Romney campaign is one giant “talking point in search of facts” as Politifact once accused.

This might be part of a larger strategy on the part of the Democrats — to use the convention to confront the Romney campaign’s accusations that President Obama is to blame for the nasty and deceitful tone of the campaign. During their convention, Republicans smeared Obama not just with policy attacks but personal attacks — everything from implying that being president is his first job to attacking the president’s golf skills. But other than a dog-strapped-to-a-car joke here and there, I didn’t hear a single speaker at the DNC attack Mitt Romney personally and many went out of their way to praise Romney — including Vice President Biden, who said Romney is a loving father and husband and “not a bad man” — a line that received applause from the crowd.

It may also be that Democrats don’t lie because they don't have to. The Obama campaign has a good and compelling record on which to run and an opposing party whose extremist agenda for America is so frightening that it requires no embellishment. In other words, perhaps Democrats told the truth at their convention because the truth favors the Democrats.