Why did Democrats allow the cardinal to give a right-wing prayer? The party still can't speak truth to power 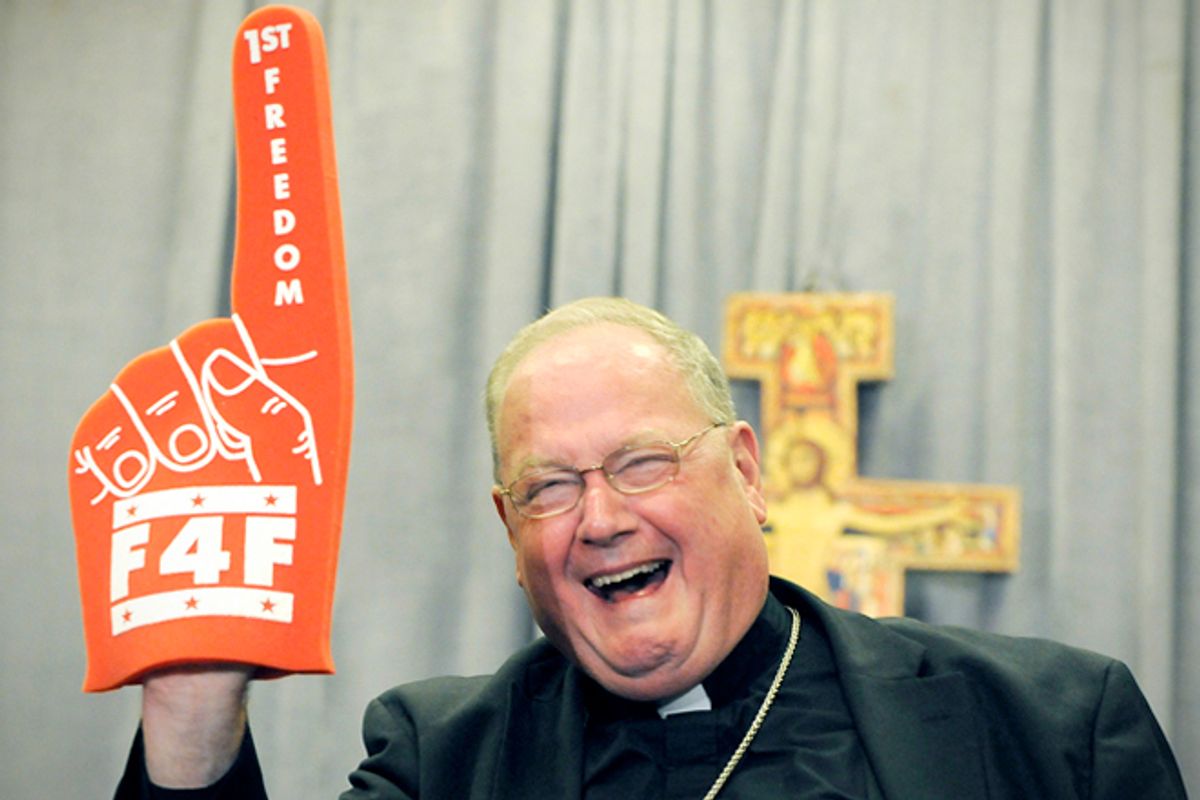 The Democrats still have a religion problem. No, not that religion problem. They just can’t seem to get past wanting the blessing of a larger-than-life religious figure — even when that figure has called their policies “un-American” and depicts their core beliefs as antithetical to our most cherished freedoms.

The circumstances leading up to Cardinal Timothy Dolan’s benediction last night were politically fraught, but they didn’t have to be. First, Mitt Romney announced Dolan would be giving the closing benediction at the Republican National Convention. (At the time, I wrote that the move signaled Dolan had chosen sides with the GOP. Nothing he said last night seemed to suggest otherwise.) Under fire from fellow Catholics and others, and in an effort to appear nonpartisan, Dolan offered to perform the same function in Charlotte. While some observers have argued that Dolan was backed into a corner and working from a position of weakness — he needed the Democrats to give him cover from the charges of partisanship — the Democrats looked like the ones in the position of weakness. They couldn’t, after all, say no.

Or could they have — or should they have? The problem with celebrity benedictions and invocations is that they are necessarily political, no matter how much both the host and guest protest that it’s really about honoring God, and not about politics. It’s a political convention! How can anything that happens at it not be political?

As Irin Carmon has detailed, Dolan took the opportunity to offer a prayer freighted with the hottest of the hot-button issues of the campaign — abortion, contraception and marriage equality, the latter two framed as infringements of religious liberty, what Dolan last night called “the first, most cherished freedom.”

In other words, Dolan wasn’t giving a final blessing on the proceedings, he was signaling to conservatives that he was there precisely to condemn them.

This, and in particular, Dolan’s prayer for protecting “those waiting to be born,” thrilled antiabortion activists. “This was a moment in history. So proud and inspired to witness #truthtopower,” tweeted Americans United for Life president Charmaine Yoest.

This all happened on the same day that Bishop Robert W. Finn of Kansas City was convicted of failing to report to authorities the Rev. Shawn Ratigan, who had a “pornography problem.” The conviction was the first of its kind in the ongoing church sex abuse scandal, with the case offering damning evidence that Finn failed to take any meaningful action to prevent Ratigan from taking lewd photographs of young girls on playgrounds and at church functions. Recently the New York Times reported that Dolan himself, while archbishop of Milwaukee, authorized payments to abusive priests so they would agree to be defrocked without a protracted internal church process. The report prompted the advocacy group Survivors Network of those Abused by Priests to protest, “In what other occupation, especially one working with families and operating schools and youth programs, is an employee given a cash bonus for raping and sexually assaulting children?”

Perhaps Democrats thought they looked tolerant, embracing of a big tent, to have Dolan there. After all, there are pro-life Democrats seeking a place within the party. Indeed, Sister Simone Campbell’s well-received speech drew wild applause when she proclaimed that her pro-life stance is about more than one issue. As she demonstrated so vividly, the Catholic Church and its many affiliated charitable organizations are well-known to many Americans for the essential social services they provide in their communities.

The Democrats’ conflict with Dolan is not just about the church’s opposition to abortion (a view Campbell shares, but doesn’t talk much about).  On the matter they call religious freedom, the Bishops have, for more than a year, embarked on a carefully orchestrated campaign, staffed with lobbyists, bolstered by activists and cheered on by the Republican Party, to paint reproductive and LGBT rights as dire threats to the religious freedom of millions of Americans Catholics (and evangelicals). As the Bishops this summer called on Catholics to commemorate the martyrdom of St. Thomas More, whom Henry VIII beheaded over his loyalty to Rome, Father Paul Scalia (son of Supreme Court Justice Antonin Scalia) more explicitly compared the contraception mandate to Henry VIII’s break with the Catholic Church and the bloody religious wars of Reformation England.

Before last night, the DNC had given a prominent role to women’s rights advocates, including Planned Parenthood president Cecile Richards, NARAL Pro-Choice America president Nancy Keenan and Sandra Fluke, the center of the Bishops’ storm over the contraception mandate. Although this point was not emphasized, Fluke, in particular, is a symbol of what happens when one religious group — one with a lot of money and a powerful Washington lobbying arm — tries to impose its religious views through policy. But that particular danger to religious freedom, religious pluralism and secular government was left unspoken at the convention, a serious shortcoming of the Democrats when it comes to talking about religion. Instead, Dolan was given a spot to advocate the opposite view.

Dolan was not speaking truth to power. Dolan is power. Sister Simone could not have given the benediction; nuns are considered laypeople and women are barred from ordination in the Catholic Church. American nuns are under Vatican investigation for promoting “radical feminist themes.”

The church, of course, is free to have these rules. That’s the real essence of religious freedom: The government won’t interfere with the church’s internal policies and governance. On matters that affect other citizens, though, religious freedom demands respecting the religious views of others as well: Many, many religious people, including many dissenting Catholics, believe their faith supports marriage equality, supports access to reproductive healthcare, supports equal roles for women and LGBT people within the faith. But by letting Dolan trounce on the convention’s full-throated celebration of equality for women and LGBT people, the Democrats bared their real religion problem: They still can’t seem to speak truth to power.