With her showstopping appearance at the DNC, she proved the power of joy 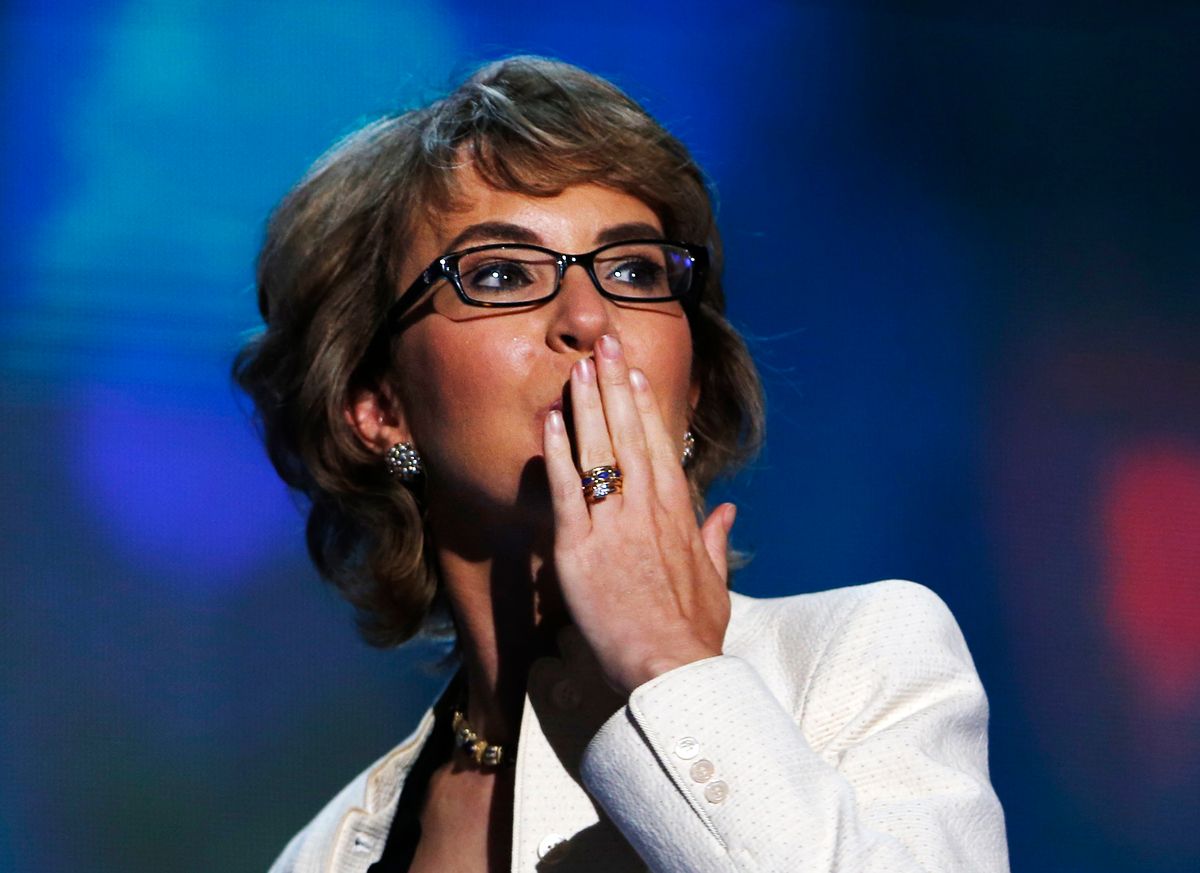 Former Rep. Gabrielle Giffords (D-AZ) blows a kiss after reciting the Pledge of Allegiance during the final session of the Democratic National Convention. (Eric Thayer/Reuters)
--

Of all the memorable, lump-in-the-throat moments of the Democratic National Convention -- Bill Clinton's "We're all in this together," Michelle Obama's "When you walk through that door of opportunity, you don't slam it shut behind you," even Barack Obama's "You did that" -- the one that shone the most brightly was the simple repetition of a few lines most of us more generally associate with childhood homeroom class. It was the Pledge of Allegiance, delivered by a 42-year-old Arizona woman. And when Gabrielle Giffords took the stage on the final night of the convention, she redefined that worn-out, overused word "inspirational" and made it hers.

Giffords has made few public appearances since the January 2011 mass shooting in Tucson in which she was shot in the head at point-blank range -- and six other people were killed. It was a devastating injury. Giffords had part of her skull and brain removed, underwent intensive reconstructive surgery, and lost the full use of the right side of her body and half of her vision. Yet her recovery has been nothing short of astonishing – a woman whom early media reports had presumed dead was walking, reading and speaking again, after just months of rigorous therapy.

Giffords' road since that day back in 2011 has been challenging and mostly private. In November 2011, she and her husband, Mark Kelly, gave an interview with ABC News, in which she understatedly referred to her recuperation as "difficult." This past January, she attended the State of the Union address and resigned from Congress, admitting, "I have more work to do on my recovery." She also vowed, "I'm getting better every day. My spirit is high. I will return." And return, at least for a few moments, she did.

To watch Giffords' Thursday performance at the DNC is to see her limping as she navigates her way to the stage, aided by her friend, Rep. Debbie Wasserman Schultz. To watch her hold her right hand in her left as it rests over her heart. To hear her struggle over the word "indivisible." To look upon a radically changed person. But that's not what made her appearance so dramatic.

It's that the most palpable change in Gabby Giffords is that the woman who was once called the most positive person in Congress now seems, impossible though it may sound, even more positive. No, she didn't resemble the energetic young woman of years past. But she appeared utterly radiant with delight. She looked so damn happy. Happy to be standing in that room, gratefully accepting the cheers flowing her way. Happy to be able to recite the Pledge of Allegiance. Happy, as well, in the words themselves. Watch her performance. Watch how she takes a rote speech we've all droned our way through and makes it a declaration of love. And that is what made it rain on your face Thursday night.

The best that anyone who has ever been through something utterly life-shaking can hope for isn't to come back from it. It's to go forward. It's to take the most unthinkably horrible things that have happened to you and keep digging until you find whatever nuggets of pure, shimmering joy that are hidden within them. It is to take the absolute worst events in your life and use them to bring out not just your best, but the best of those around you. It is to struggle mightily, but to struggle, always, toward the light. It is to embody Elizabeth Warren's passionate declaration that "People have hearts. They have kids. They get jobs. They get sick. They cry, they dance. They live, they love, and they die -- and that matters. That matters."

That Giffords can today walk at all is a stunning accomplishment. That she can walk before the world with such brilliant bliss on her face makes her a role model to us all. As her husband has said, "Optimism is a form of healing. Hope is a form of love." Courage doesn't just grit its teeth and square its shoulders. It acknowledges that life is short and desperately, desperately fragile. And so it laughs. It takes the hand of a friend. And it beams with a smile that could bring down the house.