Flip side of Sarah Palin 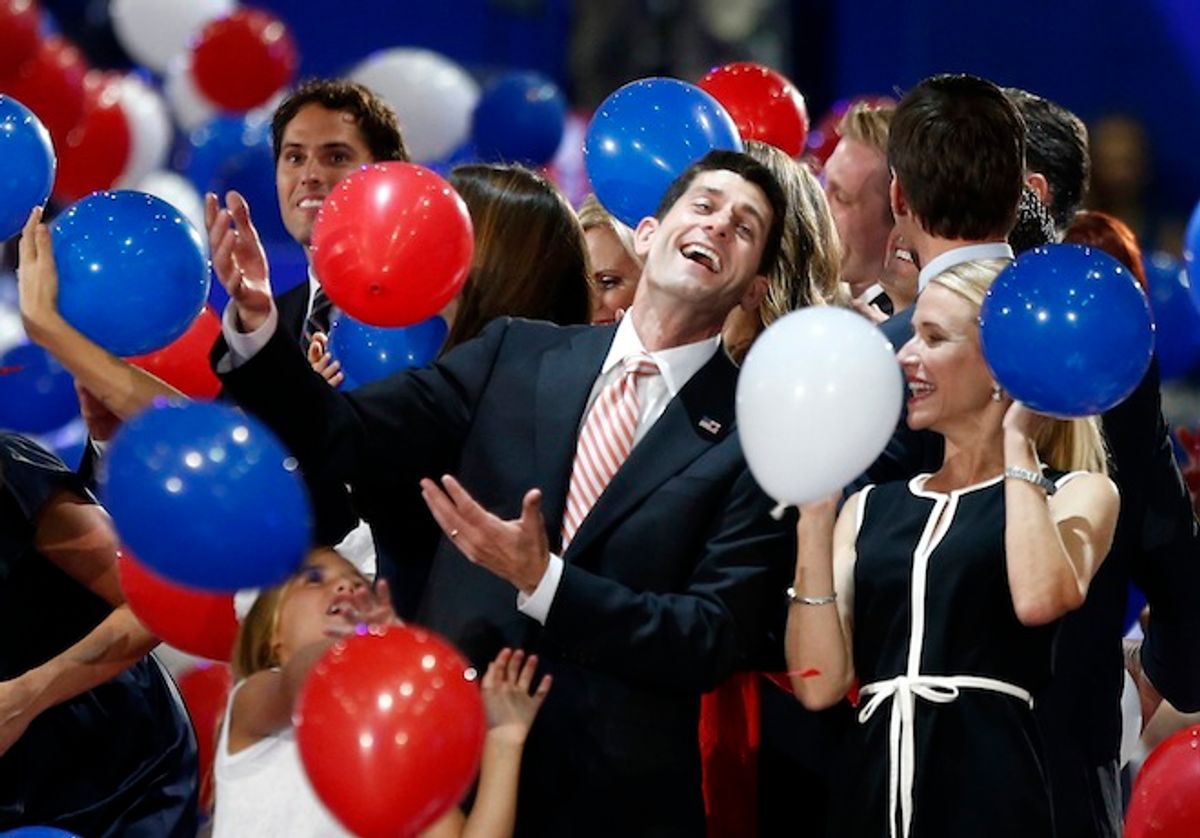 Paul Ryan and his wife, Janna, celebrate during the final session of the Republican National Convention in Tampa, Fla., Aug. 30. (Reuters/Jason Reed)
--

What was the biggest difference between the Tampa Republicans and the Charlotte Democrats? That’s easy: substance. Policy substance, that is. Bill Clinton’s tour de force on Wednesday night was a substantive defense of Barack Obama’s accomplishments and attacks on Mitt Romney’s proposals. Obama, too, got a little on the wonky side; the first half of his speech reminded people of a State of the Union, with a laundry list of programs to defend and propose. In Tampa? Not so much. Lots of effect, but a lot less policy.

Paul Ryan, we were all told when he was selected, was a wonk; his selection meant that we were going to have a big ideas debate. And yet his vice-presidential speech was anything but, and what substance he did include was blasted by the fact checkers.

Sort of the way another Republican running mate was blasted for inaccuracies in her convention speech four years ago. Remember how she bragged about opposing the bridge to nowhere, only to have it be revealed that she had first supported it?

OK. Paul Ryan is no Sarah Palin. He is, after all, the chairman of the House Budget Committee, and he certainly knows federal public policy issues far better than the Sage of Wasilla ever has.

And yet Ryan’s reputation for true wonkishness seems to be vastly overstated. He’s less a wonk than a policy naif’s idea of a wonk – just enough “baselines” and “percent of GDP” and charts to make it all look nice, but very little under the hood. As Paul Krugman said recently:

Krugman is concerned in that post with how Ryan dupes self-proclaimed budget hawks, but Ryan is duping Republicans, too.

Of course he is; who would know? We’re talking about a party that accepted Palin as a candidate qualified for the presidency in 2008, and that fell for Herman Cain at one point in the nomination fight last year. Granted, the rank-and-file voters aren’t going to be checking the math of their congressional leadership, but neither is anyone else. Or if they are, they are rapidly named RINOs and escorted from the party.

No, again, Ryan isn’t Cain, either. But a genuine wonk wouldn’t be passing off phony numbers.

The thing is, Republicans have spent 30 years convincing themselves of several things that combine to make real policy expertise a dangerous thing to have for their politicians. One is Reagan-worship, which has often taken the form of contrasting Reagan’s ignorance of details and clear “big-picture” view with Jimmy Carter’s micromanaging. A second is anti-elitism, which dates back at least to the Nixon/Agnew attack on the press and academics, leaving current movement conservatives with an often-remarked virtually postmodern rejection of any objective truth. And then there are the RINO-hunters, who are eager to pounce on anyone who deviates from whatever the current party line might be.

Real wonks, however, do know the details. They talk about policy and not in platitudes, which puts them on the record in ways that can harm them when the party line changes. And the truth is that you can’t be a real wonk if you don’t accept some sort of objective standards and reality, even if it’s only the tyranny, as Bill Clinton said, of arithmetic.

So what’s a Republican politician to do? Palin’s path is one option: simply don’t concede the need to have any idea what you’re talking about at all. Policy knowledge is per se elitist and therefore suspect.

But Ryan has found another, perhaps even better path. Not becoming a conservative wonk, because under present conditions that can’t be done, but by becoming a faux wonk. Retain the movement’s disdain for objective truth, details and even real position-taking (after all, Ryan easily slipped from bashing Affordable Care Act Medicare cuts in 2010 to supporting them in 2011 to opposing them again once he was on the ticket in 2012). But learn to use words such as “entitlements” and “reconciliation” and snow the rubes under with charts and PowerPoint presentations. And a bonus: A fair chunk of people who aren’t even conservatives will buy it and enhance your prestige.

The latter worked fine as long as Ryan was somewhat under the radar (and you know that the kinds of people who get duped by that act are the kind who don’t really take congressional action very seriously anyway). It was, to some extent, exposed in Tampa.

Yet Ryan’s reputation among movement conservatives is absolutely secure, and there’s every possibility he could be vice president of the United States next year, and a future president. And surely he’s far more qualified for that spot than Sarah Palin. But not by as much as you might think.