Why are conservatives so in love with British intellectuals? 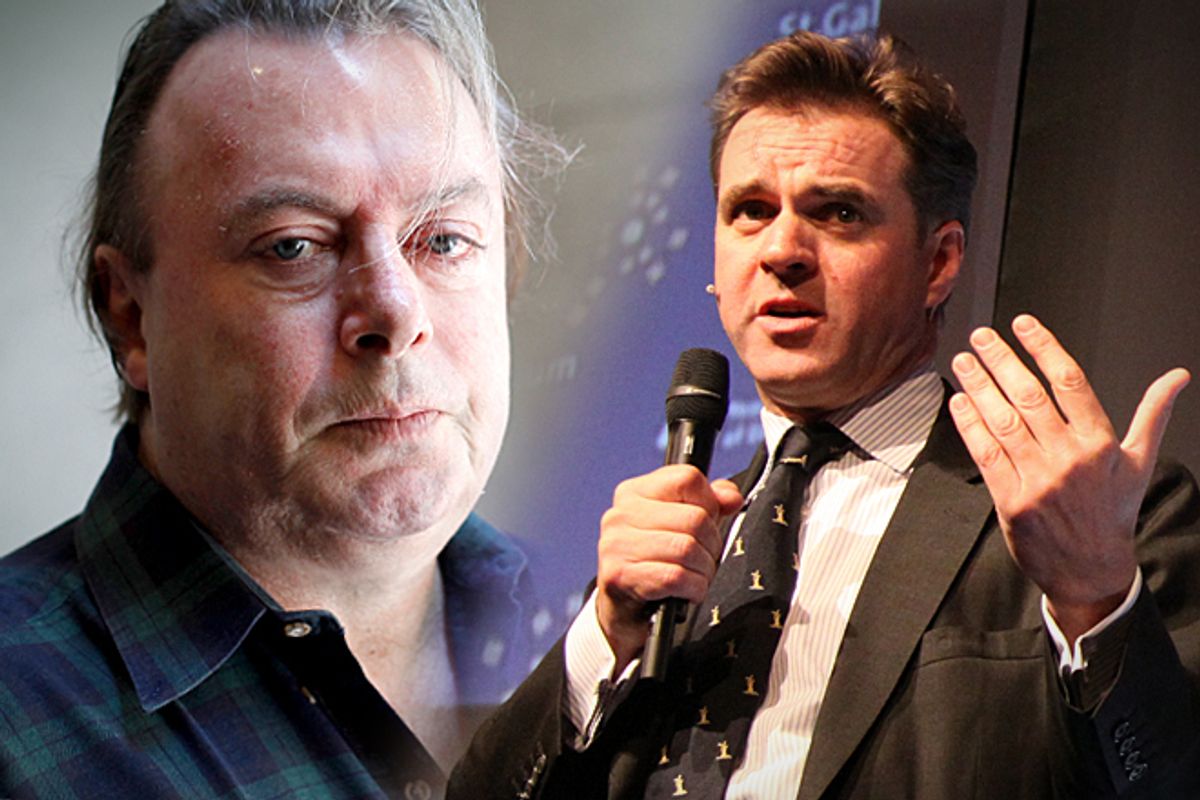 The story of American writers and artists who decamped to Paris is a familiar one that's been recently recast in golden hues by Woody Allen in “Midnight in Paris.” The story of British intellectuals who decamped to the United States is less familiar — and perhaps less colorful. In recent years it has consisted mainly of writers and professors. They prosper in part because of deep-seated American Anglophilism. We hear an Oxford accent and conclude the individual must be more educated, charming — and articulate — than we are. It might be true. Simon Schama, the British historian, recalls that English students practiced debating as well as impersonating 19th century orators. The tradition of debating has all but disappeared from American education, and this may have left us more tongued-tied than our British brethren.

Schama joined the floodlet of British intellectuals who moved to the United States, and now he teaches at Columbia University. Herein lies a question: to what extent do the Brits energize American intellectual life, and, especially, give voice and backbone to conservatives? To be sure, the British ex-pats are not uniformly conservatives — consider Schama himself or the late Tony Judt, both of whom leaned left. Yet — to use economic terms — the issue may be one of demand, not supply. In an era when many conservatives pray at the alter of Ronald Regan and Ayn Rand, celebrate guns-in-every house, challenge evolution and climate warming, champion life for the unborn and the death penalty for the born, they have a greater need for credible intellectuals than the left.

This need shows in the trajectory of two British-American journalists who emerged from similar Oxbridge milieus, enjoyed similar gifts of fluidity in prose and talk, and recently died within months of each other: Christopher Hitchens and Alexander Cockburn. While they both moved to New York, and wrote for the same leftist journals, their careers unfolded very differently. Cockburn remained a leftist and physically, if not culturally, moved to the margins. He settled in a hamlet of Northern California — hours from any airport — where he published attacks on the American empire and put out a small newsletter. Hitchens largely broke with the left, settled in Washington, DC, enthusiastically backed the Iraq war, and became a Vanity Fair favorite and an omnipresence on talk TV and the lecture circuit. Indeed, he was one of the most recognized intellectuals of our time. Cockburn peddled his unreviewed books from the trunk of his car. Hitchens wrote best-sellers and palled around with the great and not-so-great.

The death of Hitchens left a gaping hole in the conservative armature, but the demand has produced the supply in the person of Niall Ferguson, another Oxbridge graduate who has decamped to the States. Ferguson is blessed with all the talents of the breed; he is quick in pen and mouth. Plus he has good looks. (He was featured on an Indian TV series, “Beautiful People.”) He hosts documentaries and participates in endless television debates and interviews. He incarnates a new kind of public intellectual who not only dips into the mass media but lives in it. He blithely notes that his latest book, “Civilization,” like four of his past five volumes, “was from its earliest inception a television series as well as a book.” This past August, Newsweek gave Ferguson its cover to explain why Obama “must go.”

Is it newsworthy that Ferguson, who backed McCain-Palin in ’08, supports Romney-Ryan? Yet the focus on him may signify that few conservative intellectuals can step up to the plate and with verve back the Republican ticket. Those who are not ranters, birthers or flat-earthers keep their heads down. Ferguson keeps his head up. He is a gift for conservatives.

He is a historian who likes to think big. He tackled World War I in one book, Western Civilization in another. He deserves kudos for his attack on leftist clichés and PC-isms. Those who dispute the superiority of Western Civilization and claim all civilizations are “in some sense equal,” he proclaims, are “demonstrably absurd.” But what does he bring to the conservative domain? He hits all the familiar notes: America is on the decline and on the verge of bankruptcy. Worst of all, it may become France or even Greece. “America under this president is a super-power in retreat.” The numbers Ferguson adduces to prove the decline and collapse have been roundly challenged in the blogosphere as false or misleading. Ferguson warns for instance that China’s gross domestic product will overtake the United States' by 2017 — a humiliation, and the fault of Obama and his policies. But, as Matthew O’Brien asks in a thorough refutation of Ferguson’s numbers in The Atlantic, so what? China has 1.3 billion people; the U.S. has 300 million. Nor could Obama — or any President — do anything about it. Many of Ferguson’s earlier predictions, such as that America's debt is causing hyper-inflation, have proved false.

Beyond the dubious numbers dwells a bellicose foreign policy that is even more suspect. Ferguson regrets that Obama has abandoned George “Mission Accomplished” Bush’s “nation building.” Bush put an end “to double-talk by practicing as well as preaching a policy of democratization — using force to establish elected governments in both Afghanistan and Iraq.” Ferguson almost alone believes this policy has been working well, and he seems to think we should keep our armies in Afghanistan and Iraq until they attain a two-party system and a Tea Party. (“If young Americans knew what was good for them, they would all be in the Tea Party.”)

This only begins the list of military actions over which Ferguson enthuses. He cannot wait until Israel, with American naval support, bombs Iran’s nuclear facilities. Pooh-poohing any doubts, our Harvard general posits that the bombing will usher in a period of “creative destruction” in Iran. He also suggests we should have used force in Egypt and elsewhere in the Arab Spring, “which incidentally John McCain would have actively pursued had he been elected,” to orchestrate the emergence of American-friendly regimes. How military intervention in Libya or Egypt or Yemen would aid democratization is not spelled out. Perhaps Ferguson longs for a few more Iraq-type wars.

Ferguson is a provocative historian, but he is sometimes a shady numbers man and always a sunny militarist. “I am a fully paid-up member of the neoimperialist gang,” he declared some years ago. His prominence can be explained by his British charm and articulateness, but also by the dearth of credible and public conservative intellectuals. With the death of Hitchens who can speak well for the neoimperialist conservatives? To be sure, Ferguson is no Hitchens, if only because he lacks the latter’s irrepressible radicalism. In their trumpeting of Western superiority, however, they stand together. For instance Hitchens defended Ayaan Hirsi Ali, the Somali-Dutch critic of Islam, from liberals who considered her a dogmatist; Ferguson married her. On the other hand Hitchens never stopped calling Henry Kissinger a war criminal. Ferguson is writing his authorized biography. Many rightist intellectuals who disdain American bellicosity are horrified that chest-beating neo-conservatives like Ferguson have hijacked their tradition. They have a point, but it might be too late. The neo-conservatives do suffer, however, from a shortage of high-power intellectuals, which Ferguson provides. Urgent text to the Tea Party: The British are coming! The British are coming! But don’t shoot! This time they are saving you.

Russell Jacoby is the author of "Bloodlust"  and  "The Last Intellectuals."  He teaches history at UCLA