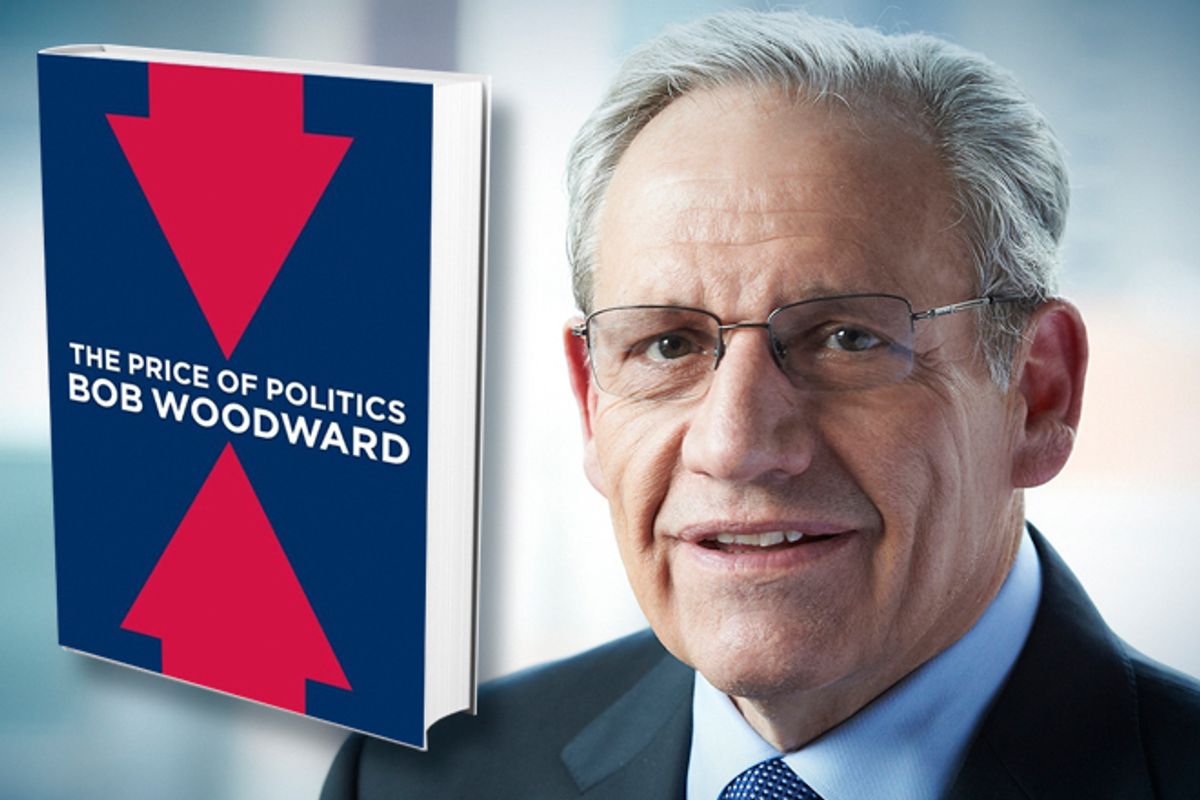 Remember that long New York Times Magazine "tick-tock" ("tick-tock" is an asshole phrase for "long article about how an important thing happened involving lots of interviews with observers and participants") about the debt ceiling deal falling apart? And then that Washington Post one? And remember how we all basically know exactly what both sides thought of the other, and how all the accounts of the negotiations collapsing amount to partisan Rorschach tests in which each side thinks the other bears responsibility for the breakdown? Well, Bob Woodward is finally bringing us the definitive (unnecessary, redundant, pointless and late) account of this thing that we have read so many accounts of already. Aaaand it turns out that both sides are to blame for everything, always.

The book is out Tuesday. Naturally, the Post was allowed to run a news story detailing some of the book's juicier bits before the book's release. Likewise, various other news organizations got their hands on embargoed copies (by going to bookstores and buying them early) and served up their own summaries. And so any interesting nuggets of information in this book will have been endlessly chewed over by the time the thing is officially on sale.

Not that there's that much nugget material! The New York Times: "The book highlights problems that are well known in Washington, but Mr. Woodward manages to get the president, Mr. Boehner and their inner circles to talk about them." Quite the journalistic coup!

The Times goes on, in a slightly catty fashion:

Last summer’s bitter budget negotiations have been hashed over in several lengthy news accounts and Mr. Woodward’s is the most exhaustive, although it is not clear how much new information, if any, he has uncovered.

More revelations (that have already been reported elsewhere): Pelosi and Reid don't work well with the president. Eric Cantor constantly undermines Boehner, and they hate each other. Everyone -- Democrats and the entire GOP leadership -- thinks the Tea Party people are insane. Everyone in Washington is super petty and very easily offended!

The book reflects the surreal Washington consensus surrounding the importance of immediate deficit reduction in as regressive ("tough") a fashion as possible. All Serious People agree that it is Very Important that we rein in "entitlements" in the midst of a prolonged and disastrous employment crisis and that it is a tragic thing that we missed an opportunity to get some retirement ages raised last year, to Save The Economy. And a major theme, of course, is that Obama didn't use his magic president powers hard enough.

The problems of a bitterly divided government, one involving dozens of choke-points for any legislative proposal and with one arm being presided over by a guy with absolutely no control over the large apocalyptic death cult wing of his party, are of course all described as failures of President Obama to "lead." Why couldn't he "lead" John Boehner to "lead" the fanatics in the House to do something none of them had any interest in doing??? Why couldn't he "lead" John Boehner to call him back when Boehner was too scared to call him back because he knew he didn't have the authority or power to promise enough votes to pass anything???

In his final chapter, Woodward faults both Obama and Boehner for their handling of the fiscal crisis, concluding that “neither was able to transcend their fixed partisan convictions and dogmas. Rather than fixing the problem, they postponed it. ... When they met resistance from other leaders in their parties, they did not stand their ground.”

He has tougher words for Obama. “It is a fact that President Obama was handed a miserable, faltering economy and faced a recalcitrant Republican opposition,” he writes. “But presidents work their will — or should work their will — on important matters of national business  ... Obama has not.”

This is rich. The fetishization of compromise for the sake of compromise -- merit or lack thereof of "each side's" position wholly ignored! -- plus the Magical President Theory of governance. Presidents should "work their will ... on important matters of national business," according to the guy who co-wrote "All the President's Men" and "The Final Days." What a wonderful combination of meaningless and craven that "work their will" construction is. Bob Woodward refuses to acknowledge the limits of a president's power but also thinks the president has a responsibility to exceed them in the name of accomplishing a policy shift that few Americans (and not even a majority in Congress) actually want.

(The other lesson is that economic hostage-taking will never actually be punished, especially if it's successful. Screw the economy to win a political battle over tax rates, and Democrats will be attacked for not acquiescing to large enough cuts in programs for the poor! And now here come the hacks like David Feith using the book to pin the defense cuts in the hilarious sequestration deal on the White House.)

The book also apparently features yet another entry in the "Obama fails to talk to CEOs in a way that they find sufficiently deferential" genre. This time it's the CEO of Verizon, a corporation that is pretty much horrible.

In the same vein, Woodward portrays Obama’s attempts to woo business leaders as ham-handed and governed by stereotype. At a White House dinner with a select group of business executives in early 2010, Obama gets off on the wrong foot by saying, “I know you guys are Republicans.” Ivan Seidenberg, the chief executive of Verizon, who “considers himself a progressive independent,” retorted, “How do you know that?”

"Who considers himself a progressive independent." Oh, sorry, I guess it was very rude to assume the rich, union-busting telecom CEO is a Republican and not a made-up vague other thing. IT GETS WORSE:

Nonetheless, Seidenberg was later pleased to receive an invitation to the president’s 2010 Super Bowl party. But he changed his mind after Obama did little more than say hello, spending about 15 seconds with him. “Seidenberg felt he had been used as window dressing,” Woodward writes. “He complained to Valerie Jarrett, a close Obama aide ... Her response: Hey, you’re in the room with him. You should be happy.”

Thank god Bob Woodward is around to make sure the American people know the truth about whether or not the CEO of Verizon had fun at the White House Super Bowl party.

Hey, remember when Bob Woodward said a Biden/Hillary VP switch was "on the table" and then it turned out that his source was apparently Mark Penn, who has nothing to do with this administration because he is a reviled grifter? Because no one will bring that up when Woodward makes the rounds to promote this new book.