Have Republicans lost the culture war? 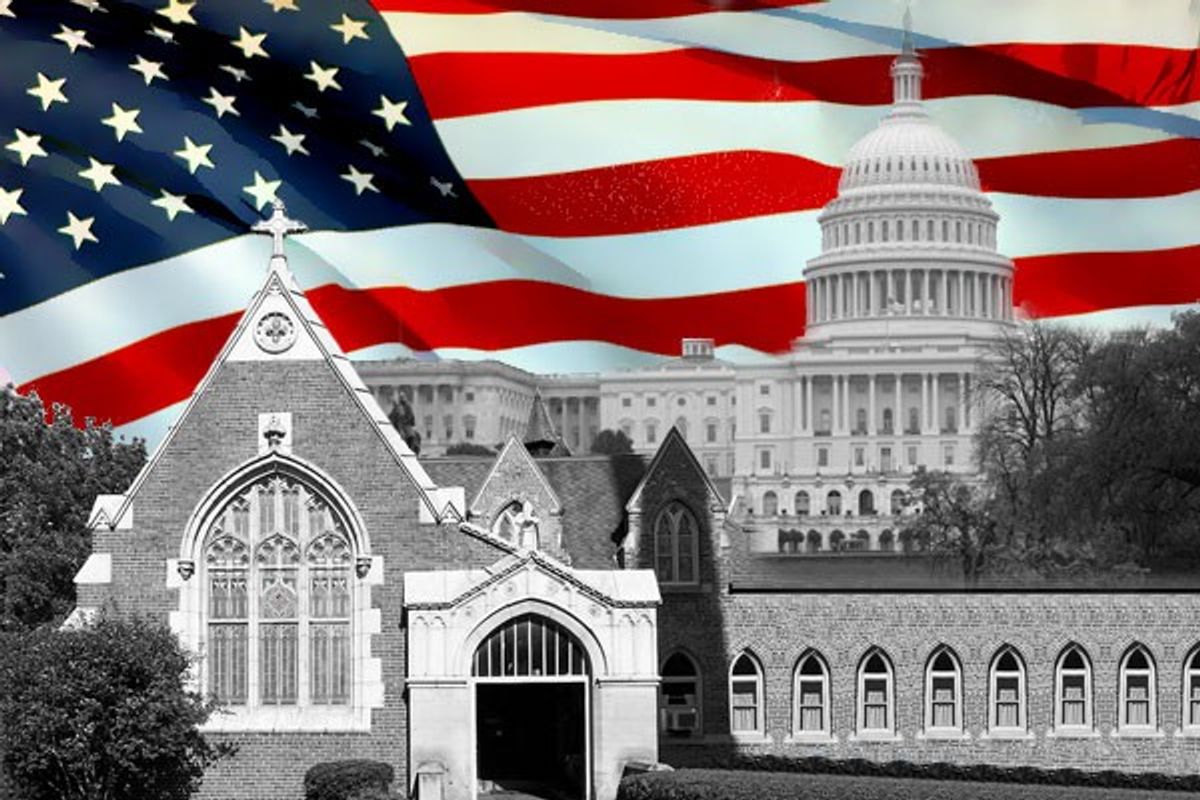 This weekend featured a strange event on the campaign trail. With Pat Robertson seated behind him at a speech in Virginia—that's the guy who says God personally warns him about upcoming world events, believes the September 11 attacks were divine punishment for homosexuality, and thinks feminism leads to witchcraft—Mitt Romney got his culture war on. Romney recited the Pledge of Allegiance and thundered, "The pledge says 'under God.' I will not take God out of the name of our platform. I will not take God off our coins and I will not take God out of my heart." So fear not, America: As long as Mitt Romney becomes president, your pennies and nickels will be safe from creeping atheism.

This may tell us more about Romney's strategy for winning Virginia—a state divided between a conservative, rural southern part and a liberal, suburban northern part—than it does about his strategy for winning the country as a whole. But when Romney makes such an appeal, it only serves to remind us how rare it is. Of course Romney's primary focus on the economy is dictated by conditions in the country, and the fact that an incumbent president struggling with unemployment over 8 percent really ought to be doomed. But it's also true that if there were potential customers for fist-shaking attacks about "God, guns, and gays," as the old Republican playbook had it, Romney would be moving much more aggressively to exploit that market. But he isn't, for one big reason: Liberals have won the culture war.

Okay, perhaps I'm exaggerating a bit, and there are some important caveats. On the state level, the last few years have seen an unprecedented assault on reproductive rights, spurred by conservative victories in the 2010 elections; the culture war is alive and well if your state government is forcing you to have a transvaginal ultrasound before allowing you to get an abortion. And if you turn on Fox News or tune in to conservative talk radio, you'll hear all the usual fulminations about Jesus-hating liberal elitists trying to take your guns and turn your children gay. But when it comes to courting the American electorate, only one party wants to talk about the traditional culture war issues, and it isn't the Republicans.

It isn't that Republicans have changed their views about any of those issues. But they don't see any advantage in pushing them. We've come a long way from the time when Newt Gingrich was calling Bill and Hillary Clinton "counter-culture McGoverniks" and Republicans were eager to bash hippies and relitigate the sixties. (As Marilyn Quayle told the 1992 Republican convention, "not everyone joined the counter-culture. Not everyone demonstrated, dropped out, took drugs, joined in the sexual revolution or dodged the draft.") It isn't that the resentments of those who were around at the time don't still burn, but liberals were proven right on just about every issue that divided the country in the ‘60s, from Vietnam to civil rights to women's rights.

At its heart, culture war politics isn't about issues; it's about identity. The culture war has always boiled down to a simple idea: Our party is with you, and the other party is alien and threatening. They're just a different kind of people, people who don't share your values, see the world in the same way you do, or want what you want. If they could, they'd twist the country you love into something unrecognizable and downright horrifying.

Make no mistake, Mitt Romney is still making that argument about Barack Obama and the Democrats. But he isn't doing it on the issues his party used to. Instead, he's trying—without enough success, to judge by the latest polls—to make that argument revolve around economics.

Two years ago, American Enterprise Institute chief Arthur Brooks wrote a best-selling book arguing that economics is the new culture war arena, where we discover who's us and them and fight for America's soul. Though the book was profoundly silly (read Jonathan Chait's evisceration of Brooks here), it did capture a rising sentiment among elite Republicans. If it's no good telling the voters that Democrats are alien because they don't hate gay people, better to say that Democrats are alien because they hate capitalism. After all, that's where the Republican ruling class' hearts were all along. Nobody really thinks that the likes of Brooks or William Kristol really care deeply about abortion and guns. No, it's economics, and in particular enhancing the wealth and privileges of the upper classes, that gets them up in the morning.

That's certainly true of Mitt Romney. Ask yourself this: What could you say for sure that Mitt Romney really believes? He's changed his position on so many things to appeal to the GOP base that not even Republicans themselves think that deep down in his heart he hates the Affordable Care Act or Roe v. Wade or cap and trade the way they do. (They've made peace with this fact. What matters to them isn't that he believes the party line, but that he'll have no choice but to stick to it. In other words: acts, not faith.) But we can all agree that if there's one thing Mitt Romney truly believes in, it's Republican economic policy. He may change his tune on abortion or gay rights, but he has never turned his back on tax cuts and deregulation, and he never will. He is a plutocrat to the bone.

His predecessors were too, of course. There was nothing for which George W. Bush fought harder than tax cuts for the wealthy, and he succeeded spectacularly in getting them. But Bush also wielded the culture war to great effect; his party got gay marriage bans on the ballot in 11 states in 2004, driving conservatives to the polls and exploiting Democrats' sorta-kinda awkward position on the issue (all 11 bans won). This year, the president and the Democratic platform both endorse marriage equality, and three of the four initiatives on the ballot give voters the ability to establish, not ban, same-sex marriage in their states.

But Mitt Romney seldom brings that issue up, and he'd rather not talk about abortion either. It's a little safer to be pro-God, so he'll go down to Pat Robertson's territory and defend the religiosity of our coinage. But as soon as he walks off that stage, you can be sure he'll quickly be returning to his arguments about the glory of capitalism and the unparalleled virtue of "job creators." Not only is it more likely to win him votes, it's where his heart has always been.