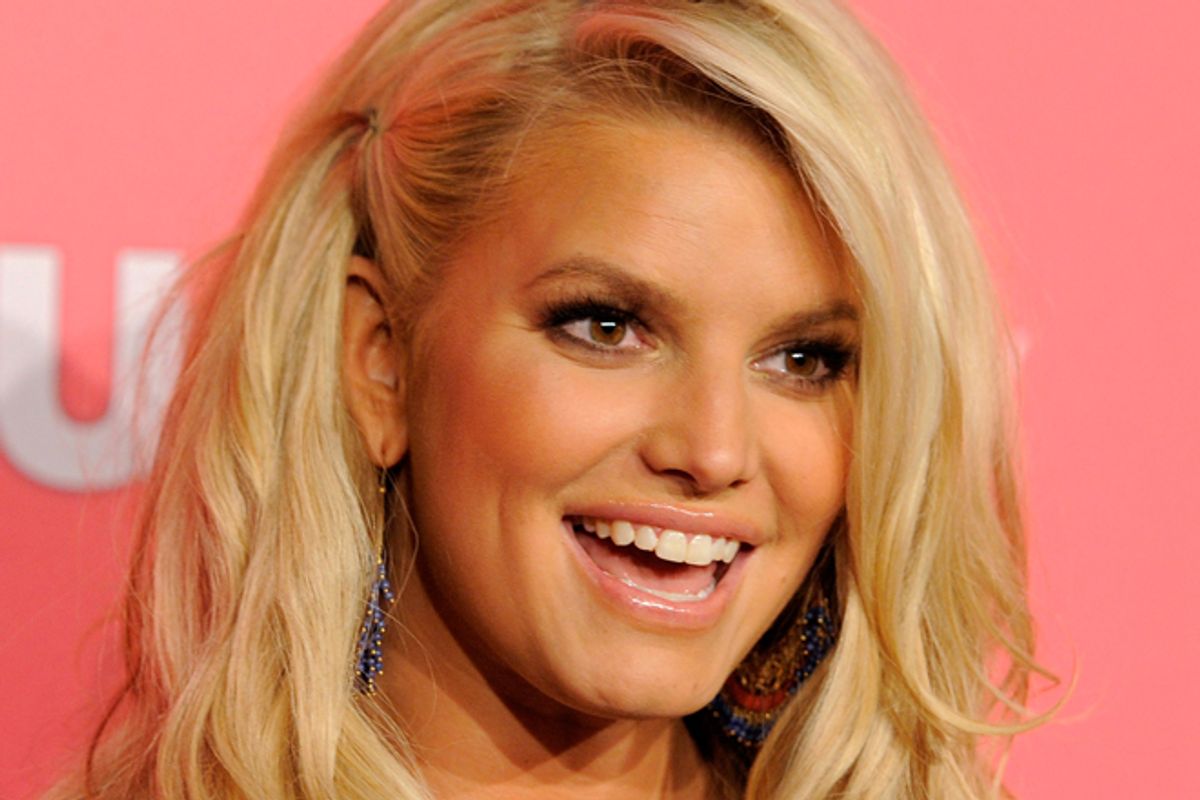 For her much-touted daytime talk show debut Monday, Katie Couric has promised to give the celebrity-obsessed world exactly what it's been waiting for – an eyeful of Jessica Simpson's post-baby body. SPOILER: I'm guessing it's thin.

Simpson, who gave birth to daughter Maxwell in May – and scored a deal with Weight Watchers -- has been keeping herself under wraps the past few months. She told USA Today last week that after a pregnancy in which she would "indulge in everything I wanted because it was the first time I was ever pregnant, and I wanted to enjoy it," she had to accept that "I'm not a supermodel. My body is not bouncing back like a supermodel. I'm just your everyday woman who is trying to feel good and be healthy for her daughter, her fiancé and herself."

She says that "I feel like everybody can do what I am doing ... I have had to come to a place where I am comfortable with myself. I'm a mom now, and get to be a role model for this beautiful little girl," and that her fiancé, Eric Johnson, loves her body just the way it is. But let's get real -- it's unlikely she'll be strutting on the stage of "Katie" or appearing in the new Weight Watchers ads that roll out this week looking like an exhausted postpartum mom dragging around those extra macaroni and cheese pounds. Instead, the new Jessica Simpson, the one who says "anybody can do what I'm doing," will more likely look like a lady who, by her own admission, has been working out with a personal trainer four to five times a week.

That a celebrity known for her curves – and one whose weight has been a topic of public discourse for years – would want to slim down after having a baby isn't just logical, it's a smart career move. (Let's just hope that she isn't too thin, lest Katie jump on her back for that sin, too.) But what's galling about this latest manifestation of our cultural obsession with mothers and their bodies – their naked pregnant bodies, their bikini-clad postpartum ones – is the implication that a woman who admits her weight hasn't magically dropped off is somehow heroic. And worse, that a lady who's had a baby needs to hide herself from the world until she's presentable again – and she'd better not take too long. Note how the reports on Simpson crow that she's "slimmed down" for her "first post-baby appearance," and she's set to "debut" her new body. What a relief, because I'd hate to imagine a world in which we might have to look at her all squishy and human a full four months into motherhood.

The only reason on earth a woman who's had a baby should ever permit herself to go off the radar is that she's too exhausted to put on pants. The notion that her body – yes, even if her body is famous – needs a big reveal like it's a goddamn Christmas present to the world is beyond insulting. It peddles the persistent, damaging idea that women's bodies exist for public display and critique.

I've had two babies and I fully get that squeezing back into your old jeans after months of not even being able to see your feet is a big deal. But how and when and if that ever happens shouldn't define a woman. Not after the considerably bigger deal of bringing a person into the world. And if a woman doesn't have have a personal trainer and an endorsement deal, she shouldn't have to buy into the idea that her body is something to be hidden from view -- or greeted with fanfare when she's finally taking up less space again.