Scrutiny from the media and Democrats is one thing, but now even Republicans are calling on him to provide details 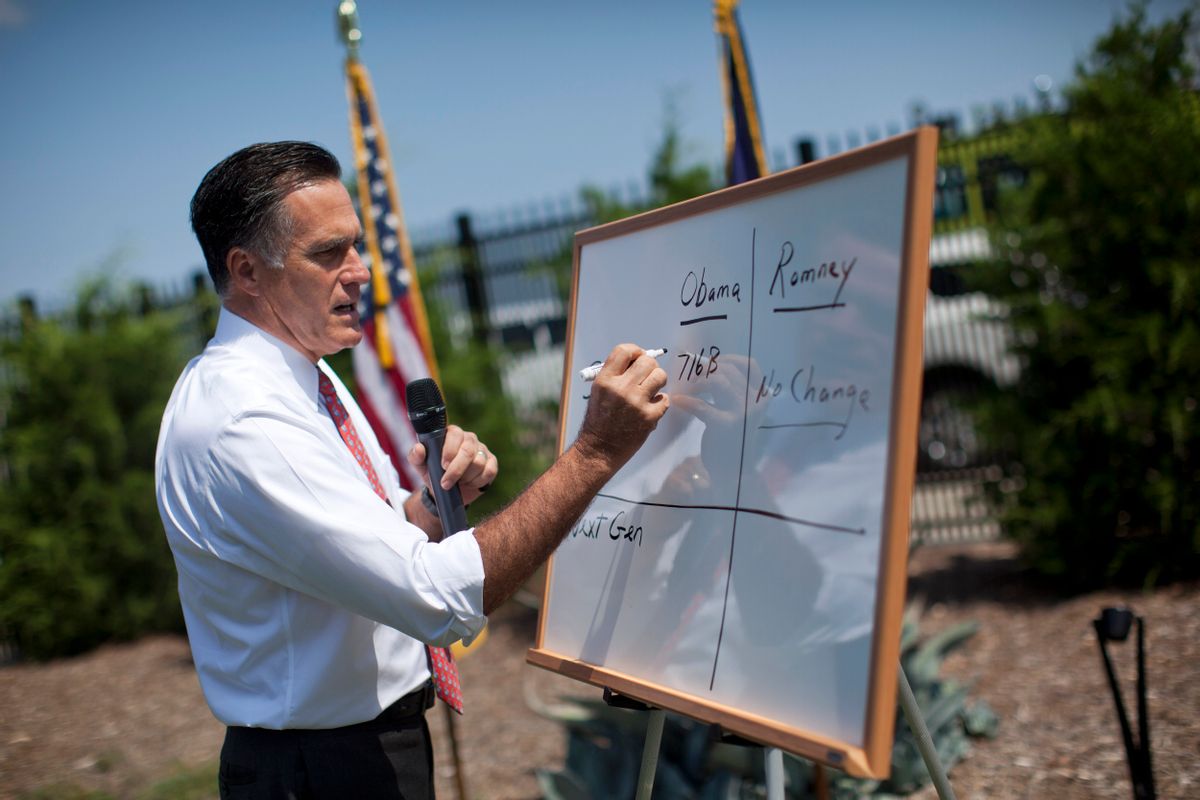 Mitt Romney writes on a white board as he talks about Medicare during a news conference in Greer, S.C., in August. (AP Photo/Evan Vucci)
--

Democrats have long been making an issue of the lack of specificity in Mitt Romney’s policy pronouncements. This has caused the GOP nominee his share of headaches, most notably with Democrats happily filling in the blanks on what would be required to prevent Romney’s tax plan from blowing a hole in the budget, but his campaign has always expected to be attacked by the other side. Much more troubling for Romney is that the complaints are increasingly coming from Republican voices, too.

In a new editorial, the Wall Street Journal takes aim at Romney for confusing the press and the public on healthcare over the weekend, when he seemed to indicate that he’d maintain certain provisions of the Affordable Care Act (only for his campaign to insist that this isn’t the case):

Mr. Romney's pre-existing political calculation seems to be that he can win the election without having to explain the economic moment or even his own policies. As this flap shows, such vagueness carries its own political risks.

This comes a few days after George Will took after Romney for refusing to spell out which deductions he would eliminate to make his tax cut math work. So far, all Romney will say is that he plans to slash income tax rates but that it will be revenue neutral.

"There is uncertainty surrounding the Romney-Ryan tax cut plan, because they have not specified the deductions that will be closed," Will said on ABC’S “This Week.”  "And we know where the big money is: mortgage interest deductions, charitable deductions, taxing that's compensation, which it is, employee-provided health insurance, and state and local taxes. All of those, you either hit only the rich, in which case you don't get much money, or you hit the middle class."

And now former Senate GOP Leader Trent Lott is telling the New York Times that Romney “needs to say clearly, ‘You elect me, this is what you’re going to get.’”

“It is always difficult to run against a sitting president, but he does need to be clearer about what his vision is and what he would do,” Lott said. “People are ready to vote against Obama, but Romney has not yet sold the deal. Now is the time to do that.”

The griping from his fellow Republicans is problematic for Romney because it reinforces and amplifies the media scrutiny and partisan attacks he’s already dealing with. When casual voters perceive criticisms of a candidate to be coming from his own party, they’re more likely to regard the criticisms as legitimate, and not just typical campaign season noise.

The strategy that Romney has been following all year depends on a lack of specificity. His campaign long ago decided that their best bet would be to position Romney as a generic protest vehicle, someone sufficiently inoffensive and competent-seeming to attract economically anxious swing voters who want to kick President Obama out.

Thus does Romney mainly speak in broad generalities about the leadership he’d provide as president and the outcomes he envisions (More jobs! Better healthcare!) while avoiding details as much as possible. This pattern even continued after he teamed up with Ryan, who now insists he’s running on “the Romney plan,” and not the much more specific budget blueprint he himself crafted earlier this year.

For this strategy to work, Romney needs two things: 1) More than 50 percent of the electorate needs to be ready to vote out Obama; and 2) His fellow Republicans needs to play along. The problem for Romney is that it’s not at all clear that the first condition will be met – and the possibility that it won’t seems to be prompting second-guessing from Republicans. It’s no coincidence that the GOP griping about his lack of specificity comes just as the political world is reaching a consensus that Obama has the advantage in the presidential race.

The good news for Romney is that the intraparty critiques will probably die down if he can improve his standing in polls. But if he doesn’t, then he may be forced to spell out some details that he’s tried all year to keep out of the political conversation.