Oh no, the Democrats are "Kerry-izing" Romney

According to Politico, "Kerry-izing" means saying Mitt has no clue on foreign policy, not "lying about his record" 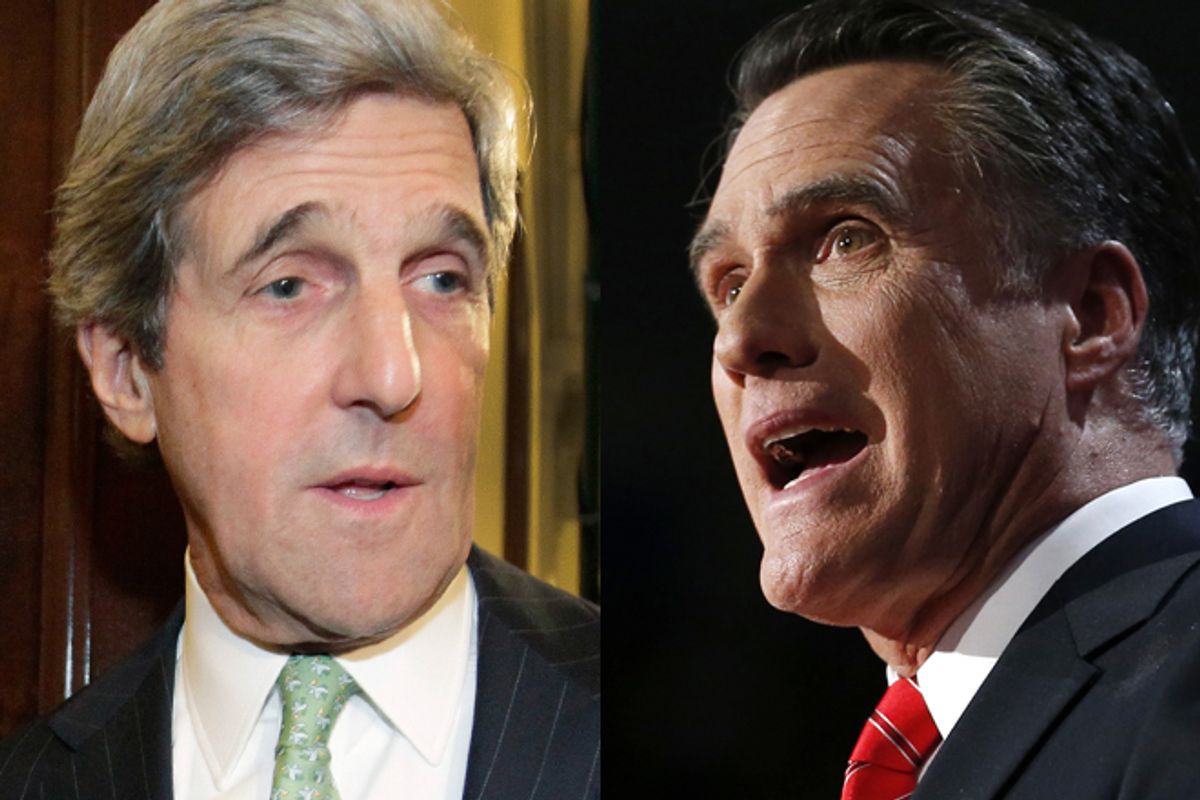 I would have thought an attempted "Kerry-ization" of a candidate -- referring to the treatment of Sen. John Kerry by the Republicans and the press in 2004 -- would involve a coordinated campaign of lies and misinformation, but according to Mike Allen and Jim VandeHei it just means "saying he doesn't have a foreign policy."

Allen and VandeHei, Politico's mascot and co-founder, have yet another one of their bizarre, needlessly lengthy (especially needless because they just repeat the same points over and over again ...) news articles that are also lengthy throat-clearing "state of the race" pieces that rehash the very obvious observations of D.C. reporters covering this race. (Some of these articles also double as opinion pieces about how mean and unfair the press and the Democrats are being to Mitt Romney.)

So, sure, it is at this point a truism that this election resembles 2004 in that the incumbent president has an advantage on "national security" issues and the challenger is perceived as rich and out of touch. So obviously the Democrats are now doing exactly what they accused the Other Side of doing, before:

O ho, Democrats! You used to complain that the president who fucked everything up kept calling his opponents anti-American, yet now you criticize Mitt Romney for refusing to ever mention the wars his Republican predecessor started and then fucked up! The shoe is on the other foot, or at least a shoe is on a foot.

Also John McCain has some advice for Romney that he should definitely listen to because John McCain's foreign policy expertise is still a thing everyone acts like we should take seriously.

Sen. John McCain (R-Ariz.) said in an interview that he thinks Romney should use his speech Tuesday to “go on the offensive — to point out that the president never mentions victory in Afghanistan, but talks about withdrawal. That has clearly encouraged the Taliban and extremists. The level of violence is up.”

Yes, Romney, accuse Obama of cutting and running and call for escalation in Afghanistan, that is definitely your ticket to victory.

As Romney knows, he can't get more aggressive on foreign policy because the Republicans have no credibility on the subject with anyone, with good reason. And everyone advising him is a veteran of the administration that fucked everything up, which people might notice if the candidate starts ever bringing up the wars.

There is also the fact that the national security record Bush was running on in 2004 was a complete and utter fraud, based on a horrific intelligence failure followed by a disastrous and pointless war of choice against a nation that had not attacked us, and the fact that the attempt to paint Kerry as feckless and unfit for command was based entirely on falsehoods, whereas Obama's argument against Mitt Romney is entirely, 100 percent accurate. The man's "foreign policy" proposals amount to "stop apologizing for America" and also "let's start the Cold War again."

For the smart version of the story of how Democrats are making Romney look like he has no clue what he's doing on foreign policy, because he doesn't, try Michael Cohen's piece in Foreign Policy instead. Cohen also points out that the DNC was grossly bellicose and nationalistic and Obama's foreign policy is essentially a spiritual extension of Bush's second term but let's not kid ourselves: The Democratic Party's argument since WWII has pretty consistently been "we'll manage America's endless state of war more responsibly than the other guys," which is why the GOP "advantage" on the subject was always so weird. Democrats love wars just as much, everyone knows this.