"Guys With Kids," but no laughs 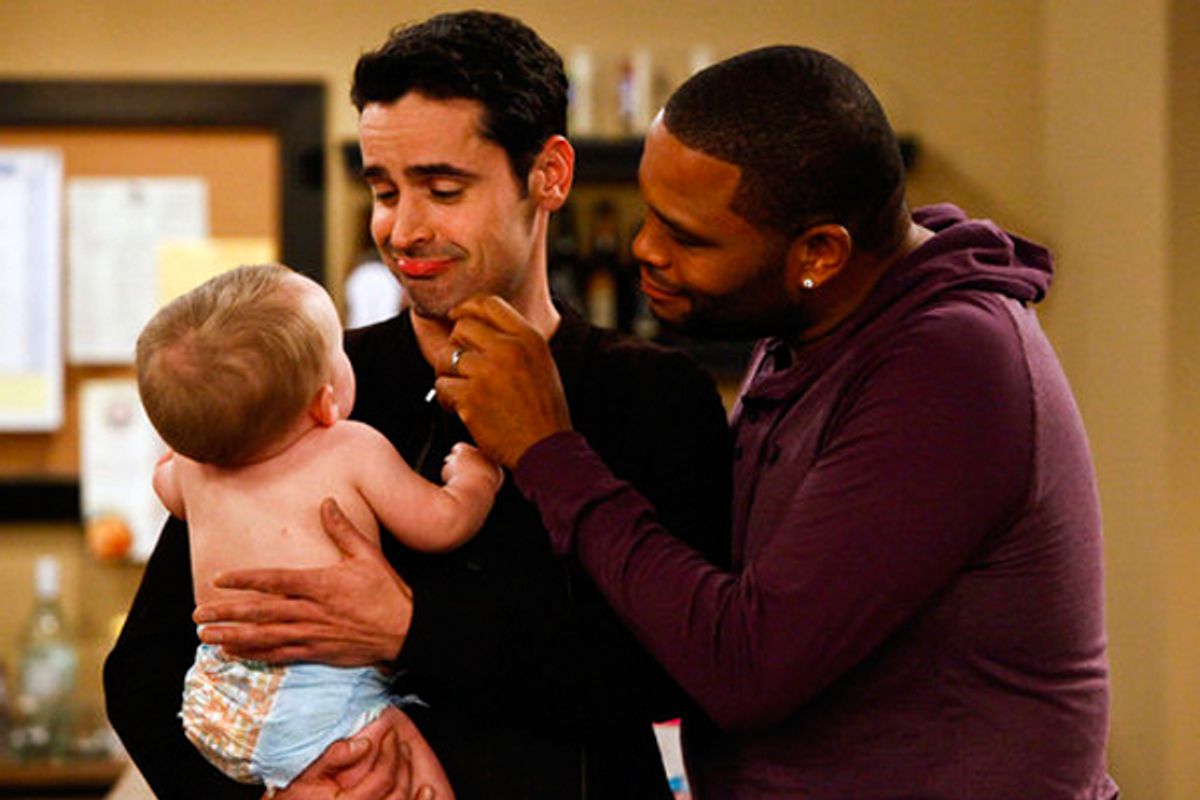 Jesse Bradford and Anthony Anderson in "Guys with Kids"
--

It’s rare for a television season to be as thoroughly dominated by one theme, one trend, as last year’s was by gender. 2011-12 was memorably, unceasingly the season of the single lady sitcom, with series like “New Girl,” “2 Broke Girls,” “Whitney” and "Girls" exploring the humor of being 20-something and frisky. 2011-12 was also less triumphantly, but not unrelatedly, the year of the sad man sitcom: Series like “Man Up,” “How to Be a Gentleman,” “Work It” and “Last Man Standing” focused on men lost in a new world order, out of touch with their machismo and regularly schooled by the much more confident women around them, exactly the sort of females popping up in all those single lady shows.

The new fall season does not have nearly the same volume of comedies with explicitly gender-oriented setups, but it does a have a few. There’s one single-lady sitcom, the pretty good “Mindy Project” (more on that when it premieres in two weeks), and one sad-man sitcom, NBC’s pretty bad Jimmy Fallon-produced “Guys With Kids,” which premieres tonight, and is the only representative of its genre I hope to see this year. The accurately titled show is a shameless bid on NBC’s part to go broad, and maybe co-opt the slightly younger, slightly more p.c. portion of the “Two and a Half Men” audience. It's a toothless junkball of a show, the sort of uninspired, reliable series a person is meant to turn on after a long day of work, so they can turn off.

Unlike the disastrous cross-dressing series "Work It," "Guys With Kids" is calibrated not to cause offense. It's far too mediocre to be truly provocative even if the premise is a carefully camouflaged bit of retrograde — oh look, it’s guys dealing with their babies! How crazy. It's not ruthlessly misogynistic, but it is set in a universe where men and women, even married ones, are at odds, and men are constantly being forced to emasculate themselves to please the women and children they love.

“Guys With Kids” stars a trio of dudes with children. Chris (Jesse Bradford) is a newly divorced, sensitive, single dad with an uptight harpie of an ex-wife. Gary (Anthony Anderson) is an exhausted, besieged stay-at-home father with four kids and Vanessa Huxtable for a wife (the character’s name is actually Marny, but one knows Vanessa when one sees her). The relatively cool, lanky Nick (Zach Cregger) is a happily married man with two kids and a stay-at-home wife (Jamie-Lynn Sigler).

The two married guys love their spouses and Chris refrains from shit-talking his wretched ex, but the pilot’s plots are all about contending with the whims of women, nonetheless. Chris’ uptight, unreasonable ex-wife walks all over him until he grows a pair and stands up to her; Gary gets abandoned with the kids by a wife with limited sympathy for his circumstance; and Nick winds up in the marital doghouse because he doesn't grasp his wife’s need to go to a “Titanic”-themed nursery school dance. The men vs. women showdown stays polite, but the only real partners these guys have are their bros.

More damningly, "Guys With Kids" isn't very funny, the primary joke being, again and again, Guys! With kids! How hilarious. They bring them to the bar! They bring them to the store! They make them fist-bump! Kids are such humorous props!  The show is a multi-camera comedy that, like "Whitney," announces it is taped in front of a live studio audience, lest the people watching from home think the laughter they are hearing throughout is all canned. It's not — it was just elicited from a captive audience instructed to react to every lame joke.