Hamm lets it all hang out

The actor proves that male stars can get in on the wardrobe malfunction act. For that, we thank him 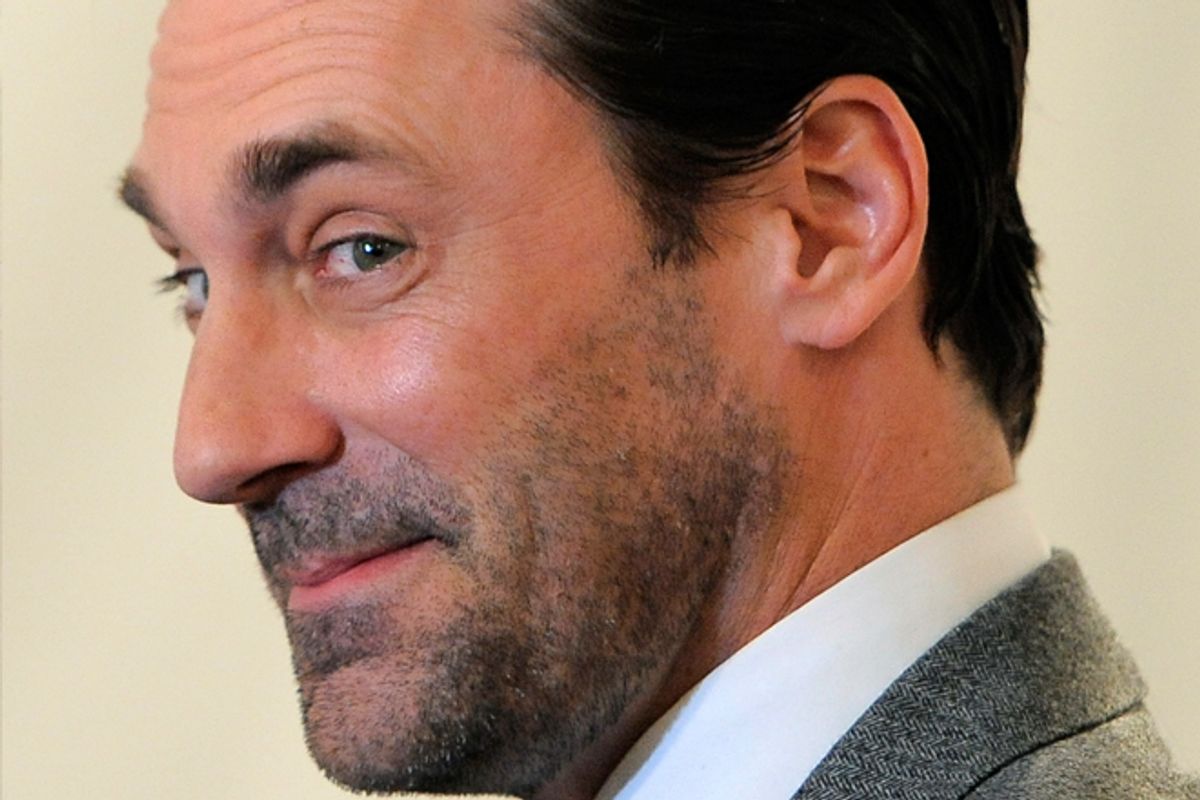 The world may never know for certain if that's really Jon Hamm's penis. Yet there the image of it is, straining against the fabric of his neat gray trousers, in a photograph of him strolling down -- of course -- Madison Avenue with his girlfriend Jennifer Westfeldt last Friday. There are compelling arguments to be made for and against the deployment of Photoshop to make it so ... impressive. But as that wondrous object of so many fantasies continues to take the Internet by storm, those of us who believe in equal time for the ladies feel like we've finally been thrown a bone. A magnificent, magnificent bone.

That we live in a paparazzi-driven, celebrity-obsessed culture is an unavoidable fact of life. And much of that culture thrives on exploiting every possible opportunity to catch a famous person in an unguarded moment – almost unfailingly at the expense of a woman. There is not a famous female other than Dame Maggie Smith who has not, in the past few years, been caught in a headline-making nip slip. Huffington Post, perennial winner of Most Shameless Destination on the Web, has an entire Sideboob vertical, where readers can choose from stories on stars showing "too much sideboob," "some sideboob" and "almost" sideboob. Maybe someday they'll find a woman with "just right" sideboob and tear the roof off this whole place.

For those whose eye lingers a little lower, never fear, because somewhere in the world right now, someone, most likely someone named Lindsay Lohan, is exiting a car without benefit of underpants. For you, there is the vast array of crotch shot photojournalism, and its nearest Jon Hamm equivalent, the celebrity cameltoe. And for everything else, there's there miscellaneous category of "wardrobe malfunction," covering everything from the above-mentioned reveals to butt crack and beyond. Truly, it is a great time to be alive -- if your thing is scouting for verification that famous people have all the same parts as regular folk.

It's possible those casual shots of Hamm and his sausage are the result of photographic fakery, but consider this. Hamm has a documented history of letting the world know that he's that confident for a very good reason. And that his solution to the boxers or brief debate seems to be a resounding "neither." Furthermore, an "insider" on "Mad Men" told HuffPo this week, "He doesn’t know this, but we used to have to airbrush it out of pics sometimes. Jon is a big boy, but sometimes it can be distracting." And with that, "distracting" just became synonymous with "all that is right and good."

So thank you, Jon Hamm, not just for being adorably goofy or brain-scramblingly handsome or calling BS on Kim Kardashian or even, I am told, a talented actor. Thank you for providing momentary diversion from the nipples and vulvas of our female stars and bringing a little variety to the table. Thank you for not giving a damn. Thank you for having a beautiful gift -- and sharing it with the world.