Mitt Romney will never be president

His disgraceful dishonesty in using the murder of a U.S. ambassador to attack Obama will haunt him 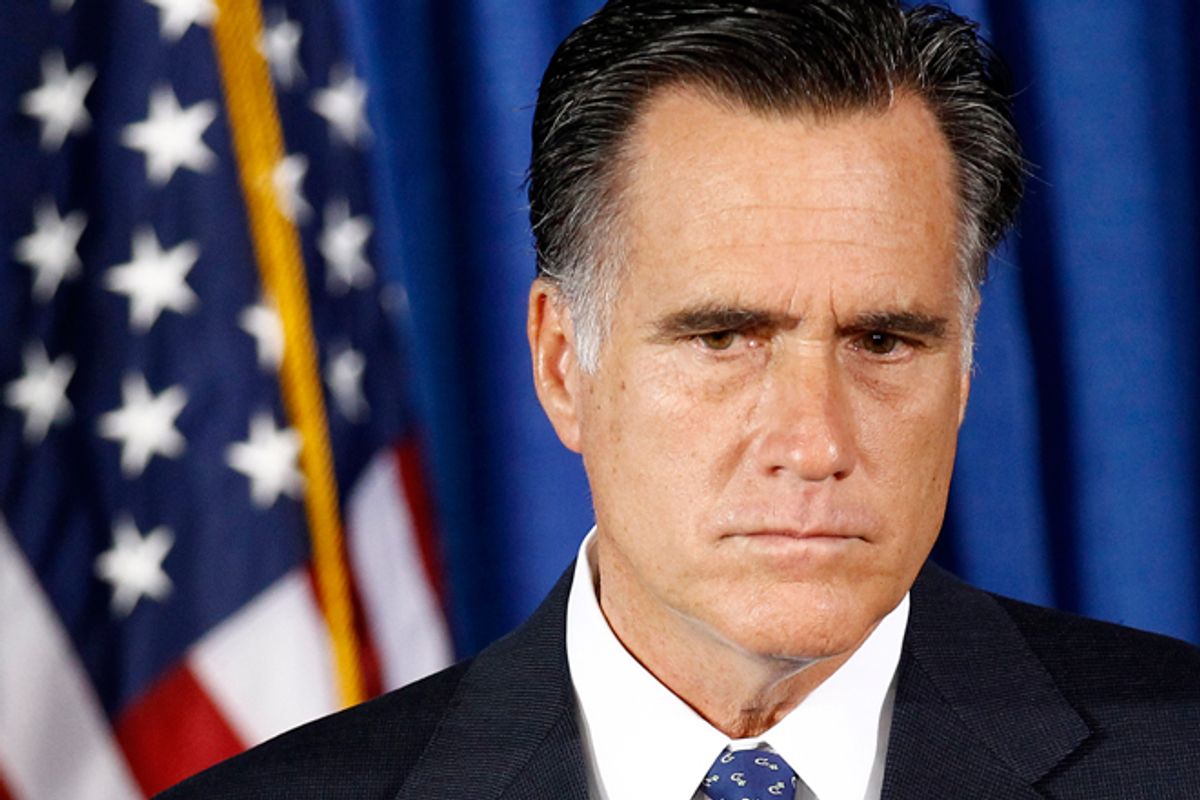 Mitt Romney, flushed and shifty-eyed, stepped to a podium Wednesday morning with a chance to disavow the despicable late-night attack his campaign launched on President Obama. Instead he intensified it, and that's why he'll never be president.

My thoughts and prayers are with the families of Ambassador Chris Stevens and the other State Department employees murdered in Benghazi last night. It's tragic that those deaths have become occasion for cheap political grandstanding by Romney. As everyone now knows, the Romney campaign blasted President Obama for allegedly sympathizing with Stevens' killers in a ridiculous statement late on the evening of Sept. 11:

That lie was apparently based on a message released by the U.S. Embassy in Cairo before the attack, which was designed to reduce tensions inflamed by the hate-speech of Terry Jones and his Muslim-hating supporters, who are promoting a despicably anti-Islam film via YouTube. The Cairo Embassy statement read: "The United States Embassy in Cairo condemns the continuing efforts by misguided individuals to hurt the religious feelings of Muslims — as we condemn efforts to offend believers of all religions." It didn't come from either President Obama or the State Department, and it was issued before the killings in Benghazi, not after them.

Romney had a chance to correct the record, and at least acknowledge that the Cairo Embassy statement didn't come from Obama himself, and that it preceded the killings. But he didn't. "When our grounds are being attacked and being breached, the first response should be outrage," he told reporters. "Apology for America's values will never be the right course. We express immediately when we feel that the President and his administration have done something which is inconsistent with the principles of America." The incredulous traveling press corps pushed Romney on his dishonesty but he didn't back down.

Republican foreign policy hands are blasting Romney anonymously, but a few people have agreed with him. Sarah Palin took to Facebook to blast Obama. "We already know that President Obama likes to 'speak softly' to our enemies. If he doesn’t have a 'big stick' to carry, maybe it’s time for him to grow one." And Palin promoter "Wrong Way" Bill Kristol likewise backed Romney, kvelling "Romney is right" in the Weekly Standard. Since Kristol is always wrong, we know that Romney isn't right.

After Palin imploded in self-pity and bitterness in the wake of the Gabby Giffords shooting, accusing her detractors of committing a "blood libel" by suggesting that she'd gone too far putting Giffords in cross hairs during the 2010 campaign, I wrote, with easy confidence, "Sarah Palin will never be president." I feel the same confidence saying the same thing about Romney after his performance today. Decent Americans recoil at his cruel opportunism.

I am certainly not saying that Obama's foreign policy or national security moves are off limits in this campaign. Those who questioned the Libya incursion from the left or the right may well have grounds to raise those questions again. But let's be clear: That's not what Romney did. He's flip-flop-flipped on Obama's Libya policies, coming out for toppling Gadhafi before he was against it. Or was it the other way around? Who knows? Probably not even Romney.

And of course Romney himself once condemned Jones and his plan to burn a Quran as "wrong on every level. It puts troops in danger, and it violates a founding principle of our republic." Of course George W. Bush criticized the decision of Danish newspapers and magazines to publish cartoons demeaning Mohammed as likewise destructive to Western relations with the Islamic world.

So Romney wasn't criticizing Obama's Libya policy with his statement. He was lying. He was making cheap political points out of the killings of four American public servants. From his tin-eared criticism of our closest ally during the Olympics, to his bluster on sensitive dealings with China and Iran, to his failure to even mention troops serving in Afghanistan and Iraq during his Tampa speech, Romney is proving he would be a disaster as president.

Critics (and even some admirers) have pointed to Romney's success at Bain Capital and noted that it was predicated on his willingness to do anything it took to close a deal. Mr. Bain will do or say anything to close the deal on his presidential run, including lie. It's ugly, and it won't work. Romney will pay for his cruel Sept. 11 opportunism in November.