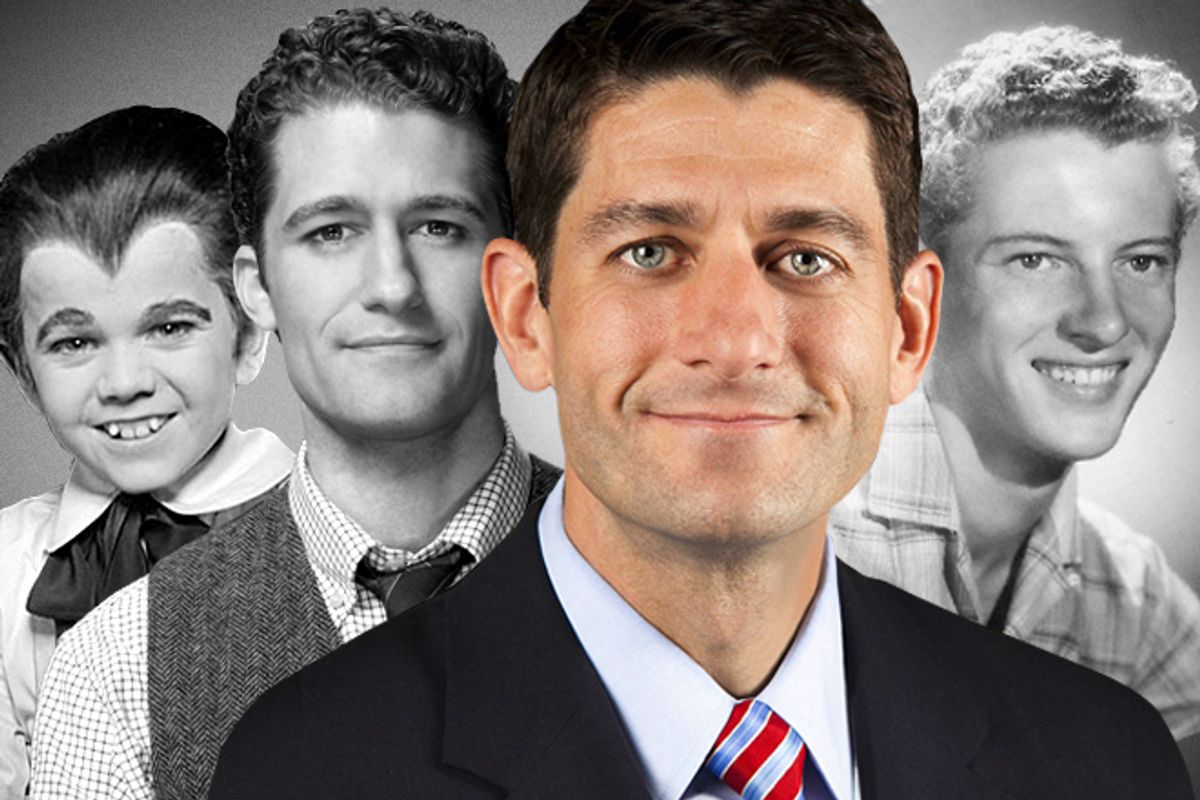 Paul Ryan, we have been told, is a heavyweight policy intellectual. A serious man, he draws on thinkers like Friedrich von Hayek and Milton Friedman to craft rigorous, complex budgetary proposals, and in so doing has become the ideological leader of the Republican Party. But somehow, when we reach for an apposite comparison, those sort of highbrow folks aren't whom Paul Ryan reminds us of. It's not great thinkers of the past like Woodrow Wilson or Benjamin Disraeli. And it's not contemporary figures with a reputation for policy acumen, like Paul Krugman or Newt Gingrich. Who is it that Paul Ryan reminds us of?

Apparently, it's TV characters. There's Eddie Haskell, the smarmy best friend from "Leave It to Beaver," who mirrors Ryan's squeaky-clean persona and slightly-too-intense embrace of anachronistic social mores. There's Eddie Munster, called to mind because of Ryan's tendency to be both awkwardly sincere and vaguely creepy, a traditionalist in the wrong context. And, of course, there's Will Schuester from "Glee," a frequent comparison not just because of the uncanny resemblance between Paul Ryan and Matthew Morrison, but because the character's gloopy sincerity and overwrought dedication to a misguided cause succinctly sums up Ryan's own political activities.

Of course, politicians have long been likened to characters from movies, comics and even Shakespearean dramas; Maureen Dowd, national treasure, has made an entire career out of pairing politicians with pop culture references. What makes Paul Ryan different is that he seems to have beaten pundits to the punch by consciously modeling himself after a fictional character. Ryan's affection for Ayn Rand is central to his persona: He says Rand was “the reason I got involved in public service," and copies of "Atlas Shrugged" were Ryan's Christmas presents to his staff.

"Atlas Shrugged" is an unusual work of philosophy not only because of its views but because it is a novel, using the fictional character of Dagny Taggart to demonstrate Rand's theory of objectivism. Taggart, who, like Ryan, belongs to a family of wealthy industrialists, is an unacknowledged genius whose efforts to bring economic prosperity are stymied by the government and others with an interest in altruism; she and her fellow job creators withdraw their money from public use, causing the economy and government to collapse, thus fixing everything. This is a not entirely unfair summary of Ryan's budget, and Taggart's insistence on being correct despite all external signals to the contrary mirrors Ryan's response to the repeated objections to his budget, even from within his own party. As the Times notes, "many colleagues were unnerved early last year when, after an unpopular spending confrontation with Democrats nearly caused a government shutdown, Mr. Ryan pushed ahead with his budget remaking Medicare for future retirees."

If we want to keep comparing Paul Ryan to fictional characters, then, this may simply be because Paul Ryan is himself a fictional character. Such a condition would be entirely in keeping with Ryan's much-noted membership in Generation X. It's a generation sometimes thought to model itself off TV shows, whether scripted or reality. (Ryan is also frequently compared to that guy who ...) For most of his cohort, though, that's not a bad thing. Pop culture has become a language people under a certain age use to communicate with one another, a mode of engaging with the world that encourages liberal lifting from and reference to our shared pop-cultural heritage in order to forge connections that might otherwise be elusive in an increasingly individualistic society with few shared civic experiences.

Where Ryan ultimately falls short is not in being a fictional character, but in using this condition to his advantage. While Obama has skillfully used self-deprecation to burnish his image (jokes about his ears and name, his very Cliff Huxtabley stories of fatherhood), Ryan has so far avoided acknowledging the widespread associations voters have between him and characters like Will Schuester, or "that guy who played jennifer love hewitt's husband in ghost whisperer." Of course, it's understandable that he might prefer to see himself as a noble Randian hero rather than Eddie Munster, and indeed such refusal is entirely in keeping with his fictional character. How Dagny Taggart of him to maintain his dignity rather than pander to the base emotional desires of the masses for personal gain! But it ultimately betrays his inability to connect with the public he's ostensibly courting. Pop culture is a robust set of symbols and shorthand shrewd politicians can use to communicate with voters. Obama has invoked everyone from Al Green to Hulk Hogan without diminishing his stature. By refusing to play into the pop-cultural associations voters already have with him, Paul Ryan is ultimately writing a tragic story for his character. You've heard it before, I'm sure. It's the one where the youngest old man in the world keeps fighting a battle that's long ago been lost, and in so doing falls far short of his grand ambitions.