Bad timing, sure, but there's a reason the campaign said what it said 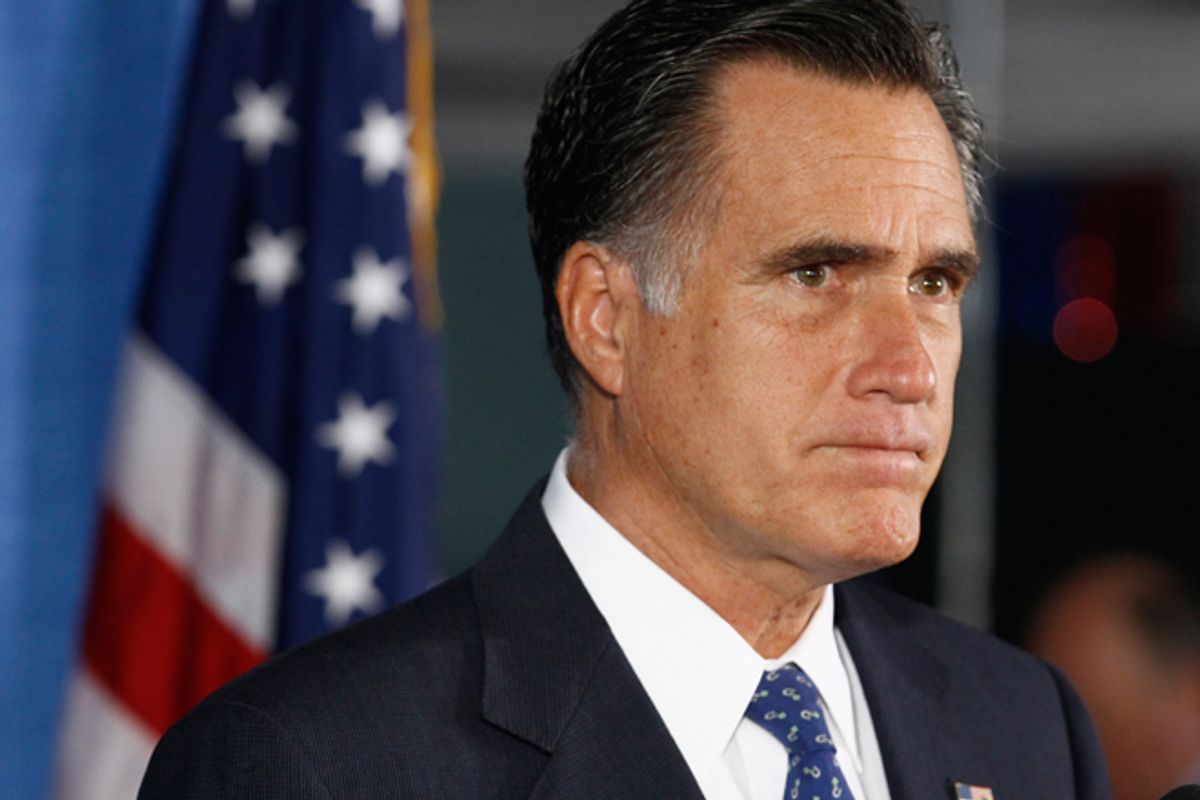 Yesterday, the Romney campaign accused President Obama of "sympathizing" with violent mobs that attacked American embassies in Cairo and Benghazi, Libya. In Benghazi, where the mob was armed and the attack possibly planned in advance, four Americans, including the U.S. ambassador, were killed. Romney's accusation was based on a statement released not by the White House but by the embassy in Cairo, and that statement was designed to quell the protests before they became dangerous, which they did, shortly thereafter. This morning, when the scope of the tragedy was clearer, Romney personally affirmed that he believes the administration "sympathized" with the mob in Egypt. "I think it's a terrible course for America to stand in apology for our values," he said, in order to evoke his oft-repeated lie about the president "apologizing" for America.

Romney's response has been widely denounced as beyond the pale, for combining dishonesty, breathtaking insensitivity (the statement was released on Sept. 11 while the violence was still underway), and obscenely cynical political opportunism in one neat package. The outrage has come not just from Democrats and the left, but also from members of the objective press and a few (many anonymous) representatives of the right and the Republican Party.

It may be true, as Joan Walsh says, that Romney will never be president. But, unfortunately, I think people predicting (or hoping) that Romney's shameless performance over the last day will end up hurting his campaign are themselves jumping the gun. This wasn't McCain suspending his campaign, the moment a few commentators have compared it to. That was so bizarre it caught the attention of even uninterested voters, and it was a fiasco that lasted for days -- days immediately preceding a debate. Romney's shamelessness added up to a morning's worth of bad headlines, honestly, even if the stink lingers for a while.

Also, unlike McCain's suspension, Romney's craven statement and subsequent reiteration of his attack is arguably not horrible politics: A considerable portion of the electorate hates and distrusts Muslims, a considerable portion of the electorate thinks Obama secretly adheres to or is at least suspiciously "sympathetic" to Islam, and headlines and images of extremists attacking Americans abroad make for a perfect opportunity to capitalize on those feelings. A nuanced, accurate and fair criticism of the Obama administration would've appealed to, well, the sort of people to whom nuanced, accurate and fair criticisms usually appeal: liberals.

Romney clearly went too far, and the fact that his campaign apparently has no idea where the line is when it comes to how much they can "get away with" before the press starts calling them disgusting should still worry Republicans (there was a way to get this "Obama is weak" point across without blatantly lying and explicitly accusing Obama of sympathizing with killers!), but an attack on Americans by irate anti-American Muslims abroad is the sort of thing that will make certain voters more, shall we say, sympathetic to the candidate who is more shameless about hating Muslims. Romney understands this and is willing to capitalize on it.

After a period of practically bipartisan disgust with Romney, the right is finally lining up behind him. A whole set of (frequently contradictory) defenses are already being mustered: that Romney was totally right, that Romney was unfortunately careless with his timing but essentially correct in his criticism, that Romney is the victim of a liberal media conspiracy, that the Democrats are actually the ones politicizing the tragedy and demanding that no one criticize the president during a crisis, etc.

So here's Jennifer Rubin's deranged and bloodthirsty defense of Romney, which is precisely what you'd expect from her. ("The president’s appallingly weak reaction to the incidents yesterday in Benghazi as well as the assault on our embassy in Cairo highlights just how unprepared and disengaged he is on matters of national security. Before our eyes, in the maelstrom at two embassies and in the economic doldrums, he is transforming into Jimmy Carter.") Bill Kristol, naturally, thinks Romney came out ahead on this.

Here also is Daniel Foster, no Rubin-esque psycho or Kristol-ian hack, referring to Romney's dishonest and ill-timed smear as "awkward" and essentially blaming the lib'rul media for piling on poor beleaguered Romney. (Foster's post also summarizes Romney's statement thusly: "Romney calls Cairo embassy response disgraceful." With that sort of paraphrase it really is tough to see what all this fuss was about!) And the rest of the National Review was soon criticizing reporters for the inane questions they asked Romney after he accused the president of sympathizing with murderers.

Once the shock of Romney's craven statement and embarrassing press conference fade, he'll continue blaming last night's horrific events on Obama's "weakness" and his allies and surrogates will continue repeating the notion that Obama's true sympathies are closer to the people who attacked our embassy than to those who lost their lives trying to defend and escape it. They will just be careful to do it in a fashion that won't upset Mark Halperin and Chuck Todd quite so much.