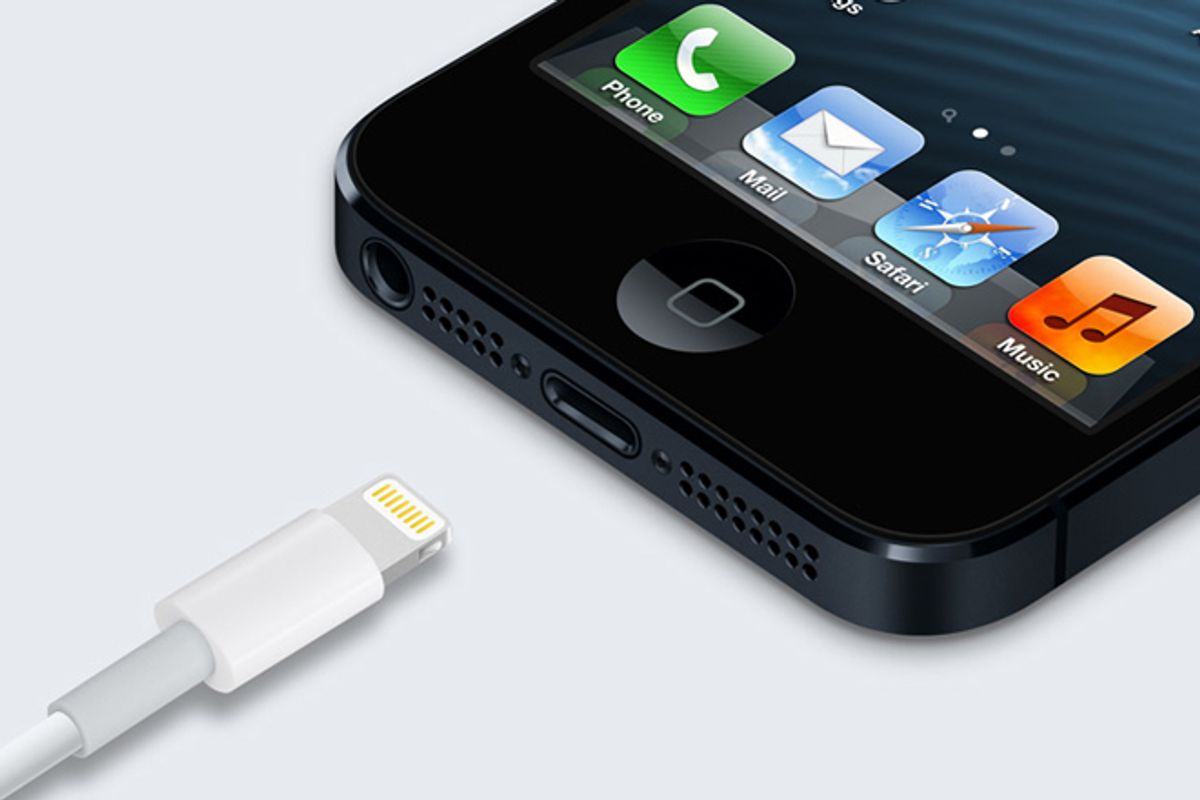 A hotly contested presidential election hits the stretch run, a deadly foreign policy crisis breaks out in the Arab world, new census figures prove that the richest Americans are still gaining on everyone else ... and yet one of the most alarming stories of the week (judging by my perhaps unbalanced Twitter feed) appears to be the news that Apple's iPhone 5 will come with a brand-new dock connector. A dock connector that will be incompatible with all previous iPhone-connected devices -- chargers, docking stations, etc.

Really, Apple? Haven't we suffered enough? The news drove Slate's normally calm and measured Farhad Manjoo into a froth of rage and sarcasm. I feel his pain. Just two months ago, my children gave me a Sony "Dream Machine" docking station for my iPhone 4S that works very nicely as a combination clock radio/stereo. But if I dare upgrade to the iPhone 5, I would have to plunk down an additional $29 for what Manjoo describes as an "ungainly" adapter to keep my Dream Machine functional. Yes, Farhad, I agree, that is indeed "the definition of being unfriendly to your customers."

I don't know which is worse -- the application of the word "ungainly" to an Apple product, or the fact that Apple doesn't appear to realize that the median family household income in the U.S. declined again in 2011. Apple's move is an insult on at least two levels: In these tough times, we can't afford to add adapters to all our existing Apple chargers and related devices. Perhaps even more disappointingly, who among us isn't affronted by the thought of an ugly adapter clashing with Apple's sublime design aesthetic?

But there's a bigger picture here. Apple is notorious for leaping ahead with design changes that are initially met with grumbling but prove to be far-sighted. The iMac's lack of a floppy drive is the canonical example. One could argue that Steve Jobs had a unique ability to see into the future, that his decisions represented progress. Apple executives argue that the new iPhone required a different dock connector for design reasons -- the old dock connector was too big for the slimmed down iPhone 5, and the new dock connector will (eventually) allow for speedier data flow. See? More progress!

But Apple's decision also plugs into a different frame, one in which the new dock connector represents a giant step backward. In the non-Apple world, it has become easier and easier to connect devices made by different manufacturers together. This kind of increasingly seamless interoperability has the advantage not just of making our technological lives less cluttered, but also less expensive. Apple is bucking that trend. No, wait, that's not strong enough. Try this: Apple is successfully turning back the tide of computer progress! Apple is warping the space-time continuum in the wrong direction!

The world of phone chargers offers the clearest possible example of this thesis. Most of the world's phone manufacturers have finally coalesced around a single standard for docking connectors -- micro USB. That means my children's Samsung phones can use the same charger as my mom's HTC phone. That means when my son forgets to take his charger on vacation, we're all covered -- he borrows grandma's. This is great. This is civilized. This saves me cash. It's a strike against relentless obsolescence, obviating the need to fill up landfills with out-of-date chargers. This is how everything should work. Plug and play, baby. Plug. And. Play.

We don't have to look far to understand why Apple has chosen this path. Aside from anything mandated by the physical design of the new iPhone, controlling a unique interface for a hugely popular consumer device ensures a steady flow of profits.

By picking a proprietary dock, Apple will remain in charge of the bustling accessory market. Not only will it get to keep charging accessory makers a licensing fee to connect with its devices, but it will also be able to reject any accessories that it doesn’t like. And one day in the future, it will be able to decide, once again, to throw the whole industry under the bus by changing the dock again.

What's so crazy here is that if you had suggested to anyone 10 years ago that Apple would have the marketplace power to impose incompatible design changes on cellphones, you would have been thought at best an imbecile, at worst potentially homicidally insane. The arc of computing progress did not bend in that direction. Computer hardware manufacturers or software developers who ignored this did so at their peril.

Apple itself was widely seen as the best evidence for this fundamental truth! Personal computers running Microsoft Windows and powered by Intel processors were open to anyone, anywhere to tinker with and add or substract hardware, and they completely dominated the computing world. Meanwhile, Apple's decision to maintain total control over its own hardware was seen as self-defeating, as limiting its market share to the most devout true believers.

Advocates of free or open-source software took the argument even further. Opening up the code itself to everyone was thought to be the most robust paradigm for the future of software development. You couldn't stop a world full of coders willing to share the products of their labor for the benefit of all. Or so the theory went. Now it doesn't look so clearcut -- mainly thanks to Apple. That's the true genius of Steve Jobs. He resurrected a model of old-school tech monopoly that everyone else thought was broken.

The question raised by the new dock connector is just how long can Apple continue to execute this kind of our-way-or-the-highway strategy with impunity? In the short term, there's nothing to fear. Apple's going to sell a bajillion iPhone 5s. Apple just won a very big patent infringement victory over Samsung. Apple is the most valuable company in history! It can do what it wants.

Until, some day, it can't. Until users decide, hey, that new Samsung is just as good as the new iPhone and it is just so much less of a hassle to use it with my other devices, because, you know, it just works.

We don't seem to be anywhere near that day right now. But if the history of personal computing teaches us anything it is that change can happen in less time than it takes to unplug a phone charger. And annoying your own users is the best possible way to start down that road.