The "X Factor" premiere established Britney Spears as coherent and bitchy. Her comeback is off to a great start 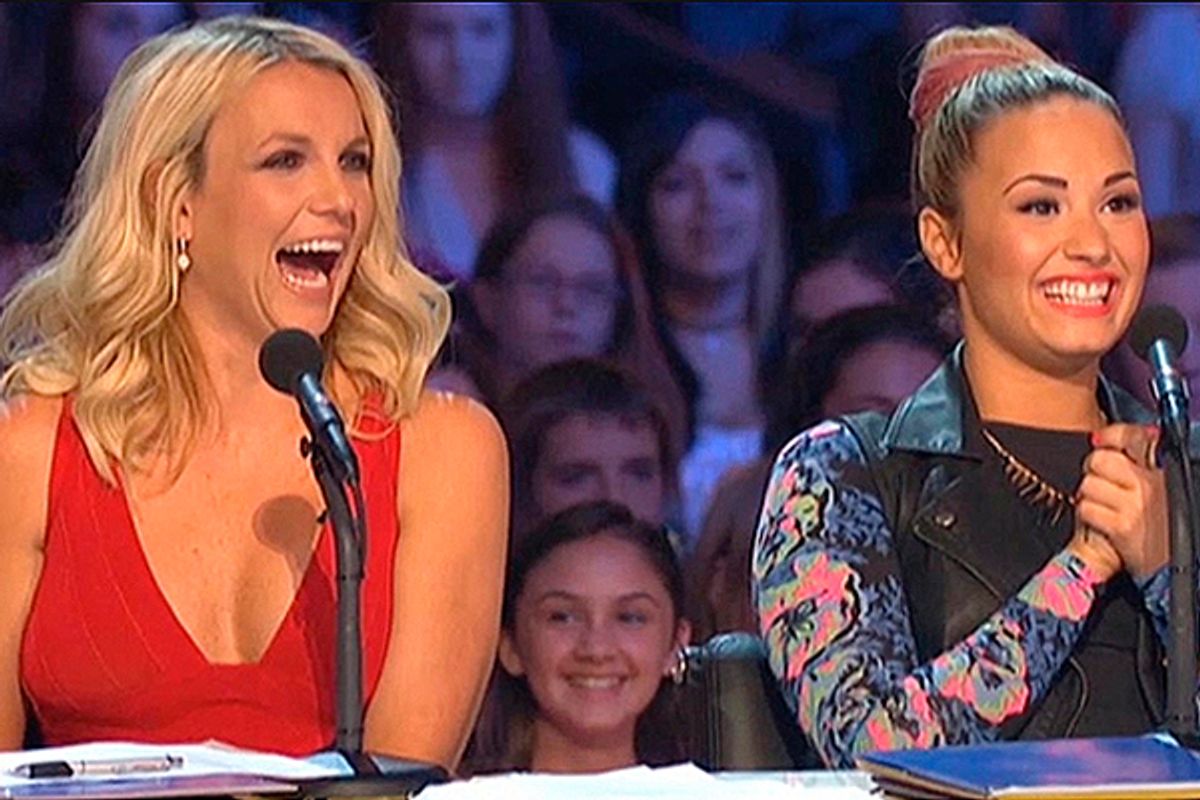 Before Fox’s musical competition show “The X Factor” premiered last night, it was unclear exactly which sort of car crash metaphor it would embody. Would watching new host Britney Spears, who was signed up by “X-Factor” boss Simon Cowell when the show’s first season didn’t attract enough attention or eyeballs, be like tuning in for a fiery pileup? Or like seeing a jalopy turn out of a major skid, narrowly avoiding disaster?

Would we get anxious, sedated Britney, the zombiefied woman still under conservatorship who has spent the years since her very public meltdown occasionally appearing in public with dead eyes and nothing to say? Or would we get someone clearer and more coherent? In retrospect, the answer seems obvious: Forget the eventual “winner”; the person getting transformed into a newer, better pop star this season will be Britney Spears.

Simon Cowell and his endless supply of white T-shirts may have a very inflated sense of self, but the guy knows how to make watchable television. Britney Spears is famous and famously unstable enough that her initial appearance on the show would have attracted attention and viewers no matter what. But we’ve been watching the feel-bad Britney story for more than five years now, in hopes it might become the feel-good -- or at least feel-better -- Britney story. (I, anyway, have been hoping.) And what’s good for Britney’s reputation is good for “X-Factor’s” ratings: The comeback kid is more moving than the perpetual disaster.

The premiere established that Britney, the mentally intact one, is back. She got the top billing; she got the most compliments; she got the best edit. She looked great (score another point for the well-tested theory that Britney’s weave is an accurate indicator of her mental state) and was very lucid, perhaps more so than she’s ever been. Spears was never a great talker. When she did it more regularly she was still a teenager, all “y'alls” and giggles. If she seemed a little nervous — she told Simon “I was a little nervous” as he came over to manage her, and there’s some tension in the carriage of her shoulders —she was also clear, to the point, accurate and relentless about being in key. (No jokes, please.) She even busted out some nice adjectives, like “funky” and "raspy.”

Early on the show made a move to establish Britney as the hard-ass judge. In a world overseen by Simon Cowell, bitchiness really is a sign of intelligence. A 50-year-old baggage handler who I really, really hope was punking the show gave a tone-deaf performance. After Demi Lovato told him so, he snarked, “That’s why you use Auto-Tune.” This seemed to activate Britney’s protective instinct. She immediately became grandly, coldly imperious: “I want to know who let you onstage,” she said icily. “I feel uncomfortable you even looking at me.” This was followed by a montage of Britney, and only Britney, saying “no” and “no” and “no” to unseen contestants. Helpless, pathetic Britney was gone, and skewering, hard-nosed Britney was in. Nothing says full recovery like a working bullshit detector.

There was even a moment where “X Factor” had Britney sort of metaphorically eviscerate old, bad Britney to prove she is now new and improved. A blond, Southern, pearl-wearing, unpleasant snob named Kaci loomed over the first hour of the show, receiving one of the more precise and brutal “bitch” edits a reality show has ever put on anyone. When she finally came out to perform, Simon remarked,  “She looks like someone!” while gesturing toward Spears. Her kinship to Spears established, Kaci began to sing. To paraphrase Simon, it sounded like she was dying. Spears helped send Kaci home, all clarity.

There were some musical performances mixed in last night — a young, sweet-faced girl who could growl like Pat Benetar; a bro-tastic boy band who debated whether to “tank it” (i.e., wear a tank top) onstage or not; a drag queen in a wedding dress and cotton-candy lipstick — but even these were put into the service of the judges' story lines. (The final singer, a very sad and soulful-sounding girl who had been bullied, was a showcase for the empathy of that other new judge, Demi Lovato, who is a reality TV natural, even if that's an oxymoron.)

In one particularly awkward encounter, Don Phillips, a 32-year-old who had sung a duet with Britney 10 years before, performed. Britney recognized him; he broke down in tears talking about the disappointments of his past, and then he sang, badly. (He also came out to Spears onstage, but this part didn’t make it to broadcast.) The judges, including Britney, rejected him. Phillips sobbed, and then broke down further backstage, wailing about how sorry he was for doing that to Spears. (“Did you see her eyes!!”) It was uncomfortable, that terrible, tawdry combination of real feelings playing out in fake spaces that is a reality TV special. Onstage, Spears went into emotional lockdown, no feelings playing across her face. It was the one moment all night when she decided to go full zombie, and it seemed warranted.