No, really. For at least one episode, a celebrity cameo actually works 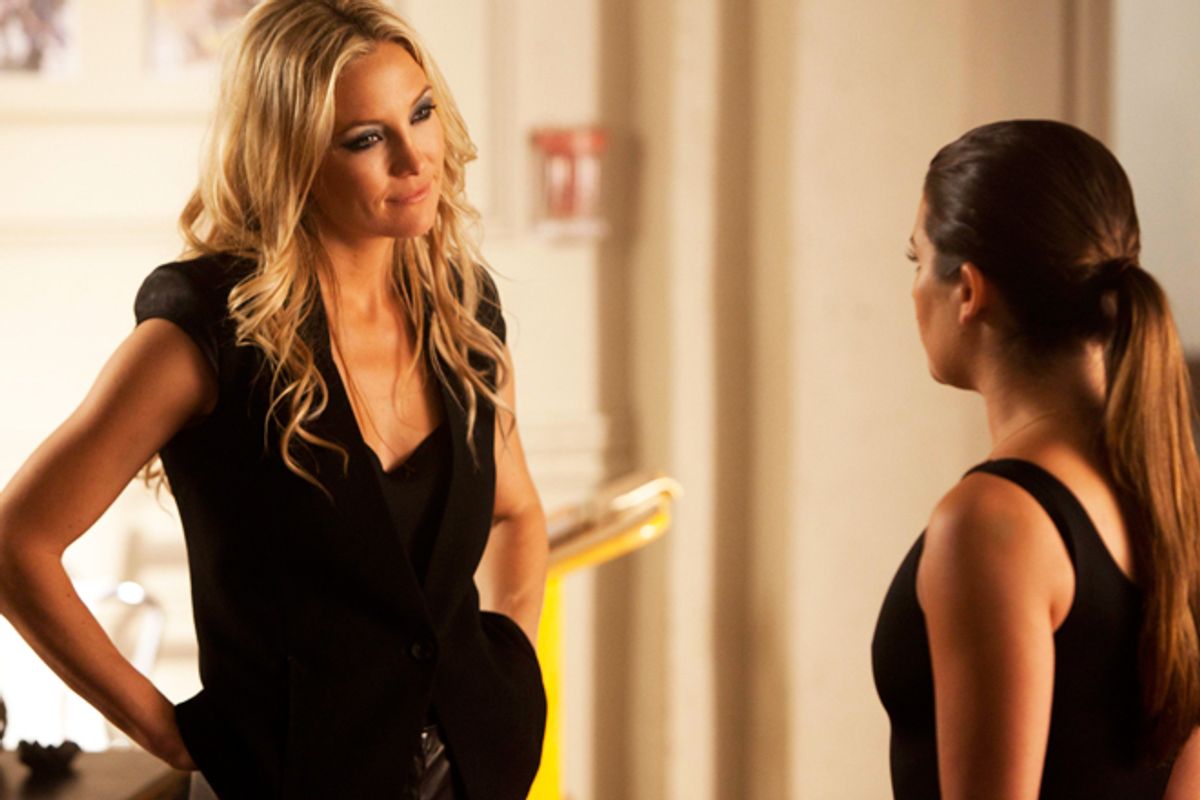 I don’t know exactly how many breakups and makeups with a TV show it takes before one’s relationship with it flips from a casual dating experiment or a friends with benefits scenario into one of those full-blown tortured, dysfunctional, on-again, off-again pairings everyone knows would be best left permanently “off.” I just know “Glee” and I have had the requisite number.

So when Kate Hudson appeared in the first episode of “Glee’s” fourth season — appearing in the very first shot of that first episode, in fact —  I almost turned it off. In the three months since I’d last experienced “Glee’s” casual cruelty, plot incoherence and self-satisfied yet perfunctory treatment of serious issues, my frustrations had mellowed. But, oh dear God, here was another famous person. Well, I apologize to Kate Hudson for dismissing her so quickly. She can’t really sing, but is the best thing to happen to “Glee” since at least Gwyneth Paltrow. (That's not an insult.)

Hudson guest stars as Cassandra July, a pitiless, alcoholic dance instructor at the prestigious performing arts college in New York that Rachel Berry now attends. (That her name sounds suspiciously like Miranda July’s is a back story I would be interested to hear.) Cassie is a sort of mashup of the preexisting “Glee” characters, namely alcoholic performer April Rhodes (Kristen Chenoweth), an aging show business personality with a real drinking problem, and Sue Sylvester (Jane Lynch), an athletic Valkyrie with a near total disregard for the feelings of others.

Like April and Sue, and everyone else who has ever appeared on “Glee,” Hudson is given the fast, snide, pop-culture-filled dialogue that is Murphy and his writing partner Brad Falchuk’s forte. For example, Cassie, the kind of teacher who is abusively tough, allegedly because she cares, takes to calling Rachel "Mrs. Schwimmer." (To be an actor on a Ryan Murphy show, one must have confidence to spare). But unlike almost everyone else who has performed this dialogue, Hudson attempts to play it relatively straight. She tones down the camp and amps up the cruelty, refusing to luxuriate in the rhythms of all the outrageous put-downs. Lump this with a few scenes indicating that Cassie isn’t horrible to the talented students who have survived her tutelage, and she lands on the showy side of plausible, as opposed to the showy side of implausible, where most other “Glee” characters reside.

Hudson, who has spent every part of her career but the beginning relegating herself to more and more mediocre romantic comedies, has lately embraced the role of the mean girl ("Bride Wars," "Something Borrowed"). This is one way to deal with a loss of audience good will: Be what they already think you are. She’s good at it. She doesn’t pander. She's not hoping that we’ll secretly like her best of all.

Except for an atrocious musical number (an aggro mashup of Lady Gaga and Jennifer Lopez songs that could almost be an outtake from “Nine,” pretty much the last “serious” movie Hudson appeared in), she does less scenery chewing than almost anyone would in this part, which has been specifically written with scenery chewing in mind.  Cassie may, next week, be revealed as just another nutter — maybe she’s sleeping with the cute new boy Rachel will soon have a crush on, or plans to get Rachel expelled or some such nonsense — but this week, anyway, she and Rachel have created a not-so-horrible episode of “Glee.”

Unfortunately, there is still the actual glee club lurking around. Last year, Murphy had floated a plan to launch a “Glee” spinoff, starring Rachel and Kurt in New York City. It was torpedoed by terrible P.R. management, but it should come as no surprise that Murphy -- who is good at starting things but not so good at seeing them through -- was onto something. The New York-based half of this episode works, while back at the overcrowded McKinley, there is just the now-starless glee club being overrun by a parade of newcomers. There are already too many people on "Glee," but add to their numbers Unique, the wonderful drag queen from last season; Marley, whose mom is the obese lunch lady; and Jake, a boy whose dialogue seems to have been transcribed verbatim from some role-playing pamphlet on how to deal with angsty teens. “So I’m angry. I got a right to be … I won’t change for you,” he tells Will, exactly the sort of precise oversharing teenage boys with temper problems are known for. With all these additions, Sue only gets one scene, while Emma and the recently graduated Mercedes, Santana, Puck and Finn have none. By the time these guys start dropping back in, we should be back to the overstuffed, crazy-making "Glee."