In Season 3, "Boardwalk" rededicates itself to its charming murderers -- but it still has nothing to say 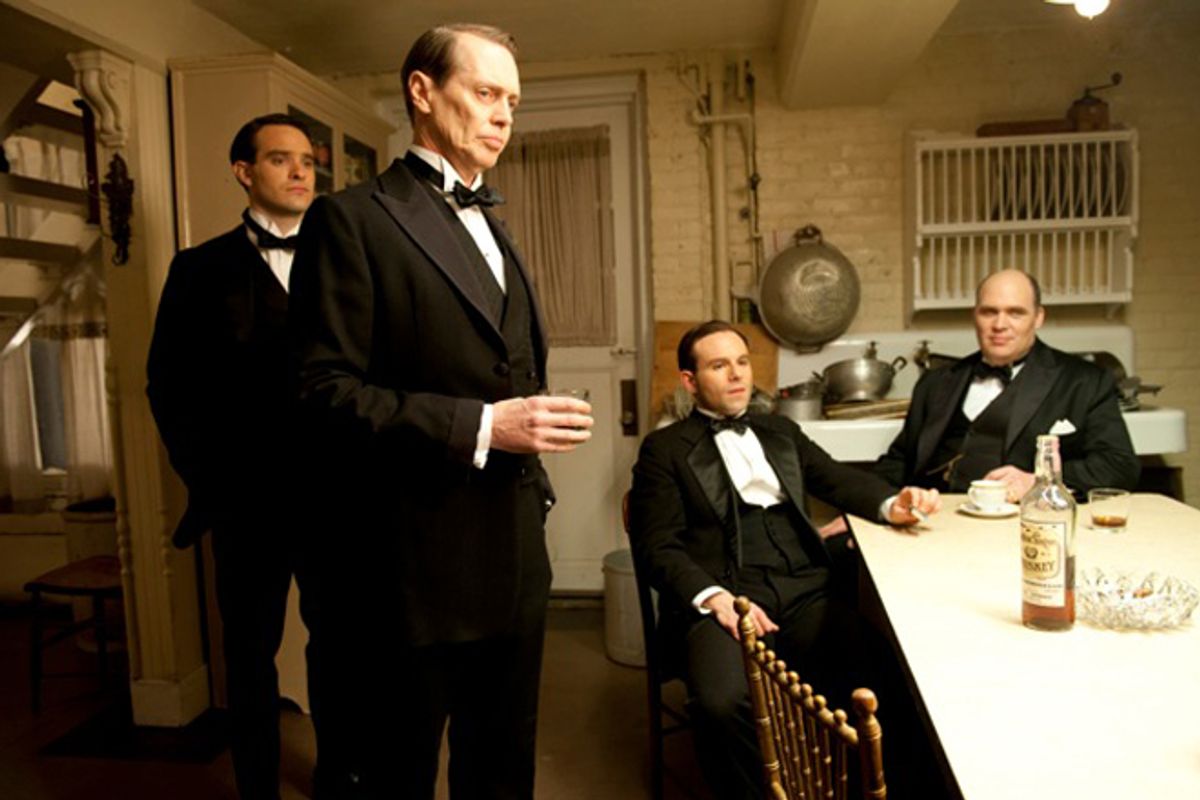 Way back in the first season of “Boardwalk Empire” -- the best-looking, most impressive, well-acted series to add up to so much less than the sum of its parts -- sad-eyed Nucky Thompson (Steve Buscemi) was warned, “You can’t be half a gangster." Two seasons later Nucky fully grasped this lesson, putting a bullet between the eyes of the dreamboat thug and surrogate son who had taught it to him in the first place. The murder of Jimmy Darmondy (Michael Pitt) in last season’s finale freed Nucky from his especial concern with being — as opposed to appearing to be — a respectable sort of gangster, a guy in the business of moving hooch, not capping humans. In Season 3, which premieres Sunday night on HBO, Nucky’s finally given himself over to the inevitability of Jimmy’s truism, and he’s taken “Boardwalk Empire” with him.

To set the mood, the new season begins with two murder scenes. In the first, we are introduced to the bootlegger Gyp Rosetti (a magnetic Bobby Cannavale), a major new character and even more major head case. More sensitive than the skin on a baby’s ass, he beats an innocent man to death with a tire iron because of a perceived slight. The slaughter is a bit of deranged, twitchy, charismatic ultra-violence that will be extremely familiar to anyone with a passing knowledge of the parts of Joe Pesci’s oeuvre that do not include “My Cousin Vinny.” Rosetti sure is crazy, but damn if he’s not fun to watch.

This bit of unhinged psychosis, all hot temper and uncontrolled id, is followed by a scene of the cool Nucky, in full capo mode, meting out the fate of a thief. He applies logic, cleverness and restraint, but when he seems about to dispatch kindness he opts for brutal justice instead. In this moment, as in future ones, Nucky hews to the criminal’s code. He is not randomly murdering, so much as revenge murdering: Thou shalt not steal if thou dost not want a bullet in the brain, right? From some angle this do-what-needs-doing-for-the-business attitude might make Nucky a sort of Stringer Bell, the no-nonsense, business-savvy dealer of “The Wire.” But “The Wire” did not glorify gangsterdom, even as it humanized some of its gangstas. “Boardwalk” glorifies both, and in this scene — a total fist pumper— Nucky’s the badass, and the soon-to-be dead guy just a prop to prove it.

Rosetti, a persnickety personality who needs constant management, is the season’s main plot generator, but each episode (I’ve seen five) contains vast amounts of unrelated shenanigans. “Boardwalk” is an uncommonly fragmented show. Watching can feel like flipping the channels, the connecting tissues between scenes and stories as much costumes and lighting (dark, very dark) as anything else.

There’s Nucky, Rosetti and all the bootlegging, but there’s also Nucky and his new girlfriend, whom he spends time with in New York City, indulging the sweeter, needier parts of his personality, Don Draper-style (except Don Draper is not a killer, and when he unscrews a razor blade in his girl’s bathroom, you don’t worry for her throat). Meanwhile, Al Capone’s in Chicago, managing an entirely different set of liquor logistics and macho men. Michael Shannon’s Van Alden is in Chicago too, but with a secret identity, caught in a soul-crushing “Death of a Salesman” reenactment that could also function as a PSA about the dangers of adult bullying. Gillian Darmondy (Gretchen Mol) worries over the decorations in her new whorehouse while getting a head start on being as deforming a grandmother as she was mother. Chalky White’s trying to marry off his daughter and Margaret Thompson née Schroeder is doing her part for women’s health, in a story line that feels positively “Forrest Gump”-ian in its short-handing of era-defining “important issues.”

Along these lines, “Boardwalk” remains ham-handed with its “metaphors.” In one story line, Margaret takes an interest in Carrie Duncan, a female pilot attempting a solo journey across America. Duncan’s flight is an occasion for the men on the show to make disparaging, on-the-nose, time period-accurate remarks. “She should spread her legs, and leave spreading her wings to her husband,” says an unenlightened, misogynist cardboard cutout who has temporarily replaced Steve Buscemi in the part of Nucky Thompson. She’s also a handy symbol of Margaret’s own desire to fly above, follow her dreams, and be free. Spoiler alert, but by the end of Episode 4, a newspaper informs us that Carrie Duncan’s plane has crashed near Yosemite. Sucks for your dreams, Margaret! They're crashing to earth just like that woman you identified with!