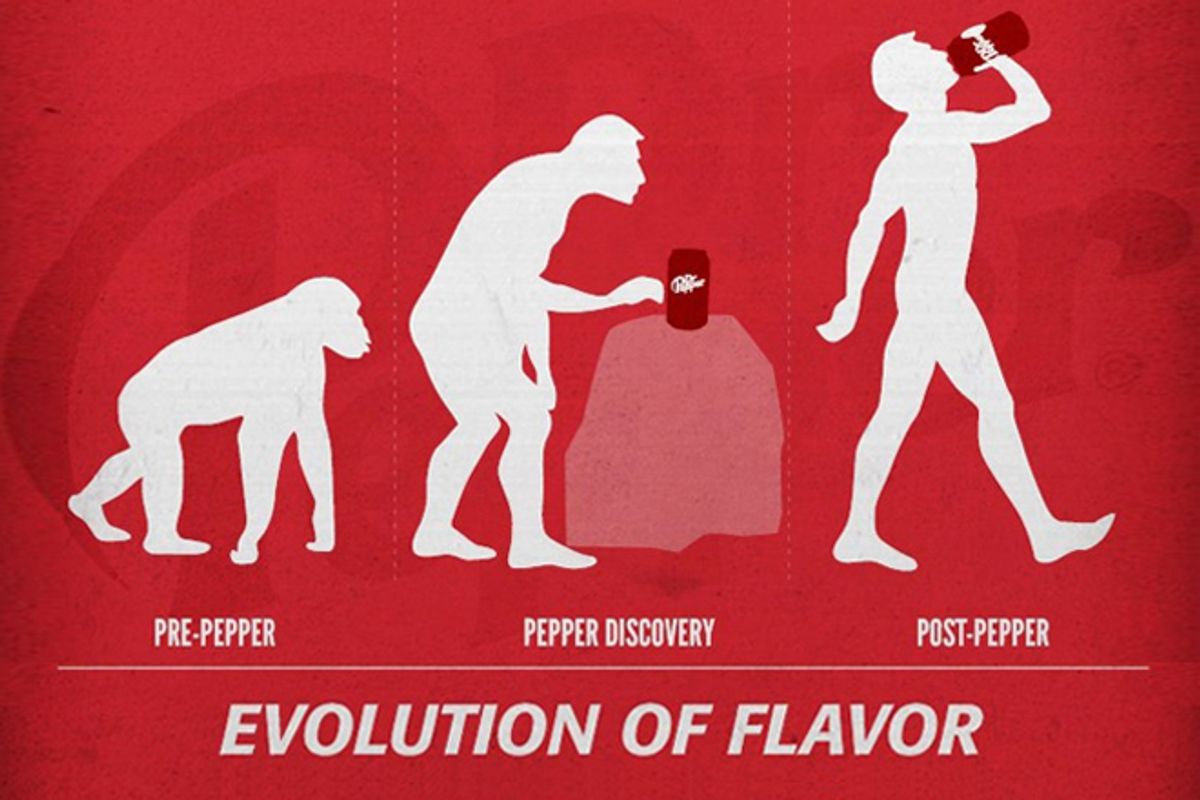 If you're keeping track of the religious values of the crap you ingest, here's an update: Chick-fil-A is still conservative, but Dr. Pepper hates God. Well, the God of Kirk Cameron anyway.

On Thursday, Dr. Pepper posted a new ad on Facebook explaining the "evolution of flavor" with a riff on the famous evolution of man illustration that shows how homo got sapien. The ad traces the path from a knuckle dragger through the "Pepper discovery" to the final silhouette of a happy, naked Dr. Pepper drinker. Possibly Prince Harry.

It's not the cleverest or most original concept the soda brand could have come up with – that evolution trope has been used to sell everything from alcohol to hair removal cream to sound systems to Whoppers. Yet it was shocking enough to the folks who still haven't read the memo from Darwin to cause an uproar on Facebook.

After the ad appeared, the soda-drinking Bible literalists promptly took to the comments, declaring, with no hint of irony whatsoever, that "I ain't no freakin' chimp." Of course, the creationists should have expected Dr. Pepper to come down on the side of science. He is a doctor, after all.

Ever since, on the JESUS IS NOT A PEPPER side, commenters have been weighing in to register their fury, declaring "this photo is in very poor taste and certainly not something I want to identify with!!!" and "I didn't come from no ape the great creator made me GOD!!!!!!!" Because God loves exclamation points like he despises abiogenesis. And several people have declared "No more DP for me" because of the apparent anti-world-in-seven-days stance. "Let me believe in a God that created me," writes one poster. "I'll let you believe that you came from a rock." Reminder: We're talking about an ad in which a caveman discovers Dr. Pepper.

The controversy has also spawned some hilarious responses in the atheism subreddit, from Peppers who know that "EVERYTHING AROUND YOU IS EVIDENCE OF DR PEPPER OPEN YOUR EYES" and ask "Do you think all 23 delicious flavors can come together like that by chance?" It's all very entertaining -- if you don't think too hard about the fact that it's 2012 and we're still arguing about evolution in this country. And how it pertains to soft drinks.

The doctor himself has made no official comment on the kerfuffle but this much is sure – he's part of an Origin of Species crowd.