Obama promised change but has embraced the secrecy doctrines of George W. Bush. Why is Romney the "secretive" one? 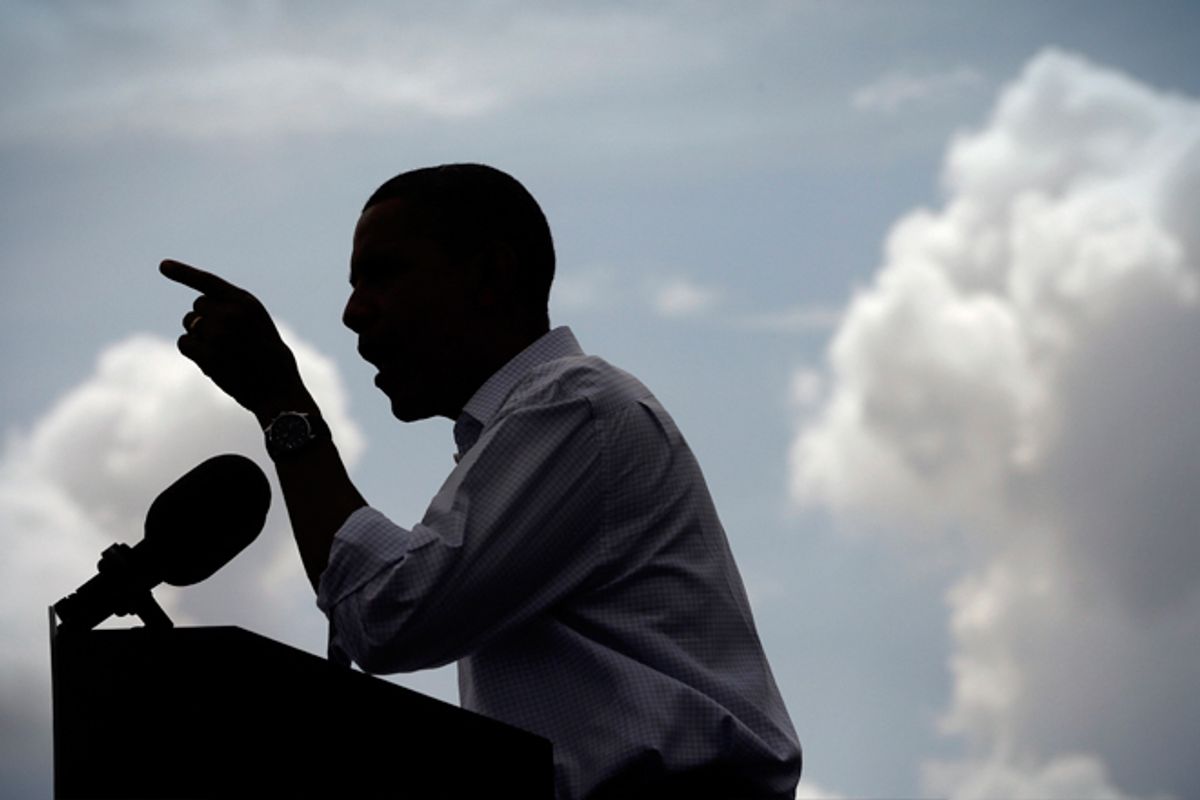 The calls for Mitt Romney’s tax returns are not going away.

This week, Hustler publisher Larry Flynt offered $1 million for information about Romney’s taxes. The unusual bounty drew plenty of press, reviving questions about Romney’s secretive campaign.  Obama’s aides quickly pounced, releasing a pair of new tax attack ads in the past three days. Romney is still maintaining a defensive crouch, protesting that requests for his records are a political distraction, even if most candidates release far more personal information. Yet Romney has never punched back at Obama’s vulnerability in this area: an expansive approach to government secrecy throughout his first term. Despite the dominant narrative of this year’s campaign, the fact is that both nominees are keeping some very big secrets.

Take one of the most significant recent shifts in foreign policy. While the Obama administration has eagerly touted its success against al-Qaida, a recurring theme at last week’s Democratic Convention, it has taken a remarkable position when pressed for information about its drone attacks on accused terrorists.

The administration refuses to even confirm whether the drone program exists.

Obama officials argue that simply discussing the program, let alone releasing information about its legality or operations, would undermine state secrets. (Obama’s attorneys are using that very argument to fight a Freedom of Information lawsuit, telling a federal court they “can neither confirm nor deny the existence or nonexistence” of the well-publicized drone operations.)

The drone program does, of course, exist. It has been confirmed by news reports in the field. Administration officials have also confirmed its existence – a hypocritical wrinkle for Obama’s secrecy defense in court – and promoted it as an alternative that reduces collateral deaths associated with larger military strikes. That may be true. But the public has very few ways to know, because of the administration’s intense secrecy.

The president also uses the drone program to carry out a new power to order killings of American citizens without trial. This authority is formally justified by another secret – a 2010 classified legal opinion from the Justice Department, which the New York Times reported last October. Members of Congress, including some Democrats, have called for the secret memo to be released, at least in redacted form. Obama has refused. That is not only another break with his transparency pledges, it contrasts sharply with his release of similar legal memos drafted during the Bush administration.

Obama released the infamous “torture memos” in April 2009, citing his belief in “transparency” and the “exceptional circumstances” surrounding interrogation techniques. The opinions showed how the Bush administration justified several extreme practices that almost certainly violated the law, and which have been discontinued. The release provided the public with specific and disturbing information about U.S. interrogation practices – the kind of transparency that enables voters to make informed decisions about their government.

Yet if transparency was the right response to Bush’s national security controversies, why doesn’t it apply to Obama’s own controversies?

That double standard seems like an open target for the GOP, especially given the recurring attack on Romney’s “penchant for personal secrecy,” as David Axelrod recently put it. But Republicans are still holding their fire. The word “secrecy” was not mentioned once from the podium at either party’s convention, despite six days of speeches covering a vast range of policy and politics.

In this era of partisan scuffles over the narrowest of differences, the silence suggests a new balance of power. Republicans prefer economic attacks to all other topics, and are wary of emphasizing the president’s foreign policy leadership. Obama ran on a universal appeal to transparency as a governing model in 2008, but once in office, he embraced the secrecy doctrines of the national security state. That has not diminished his rhetoric, however. On the campaign trail, Obama’s aides adeptly invoke selective transparency as a cudgel. This is the politics of asymmetric sunlight – disclosure for the challenger, but secrecy for the incumbent.

The tactic is working, so far, and Romney has failed to offer a substantive rebuttal. But it is also disappointing. The candidate who promised historic transparency has not only reversed course in office, now he risks reducing “transparency” to another one-sided, partisan ploy.