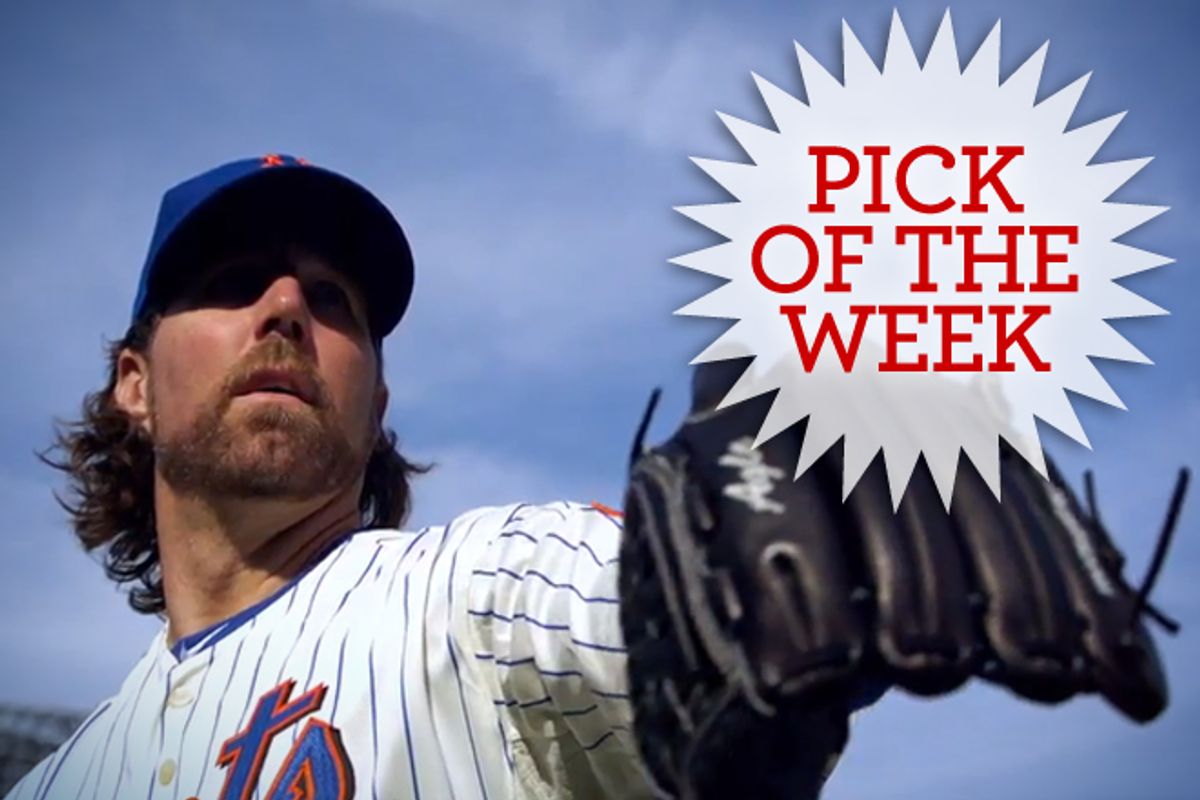 Baseball fans have enjoyed a season full of surprises in 2012, with many twists and turns likely still to come as the national pastime reaches its annual denouement. With just over two weeks remaining in the season, both the Baltimore Orioles and Oakland Athletics – teams expected to be fourth-place afterthoughts – are playoff contenders, while the much-touted Miami Marlins, with their snazzy new South Beach stadium, have been a total bust. The supposedly mighty Philadelphia Phillies may not make the playoffs at all, and even the legendary New York Yankees, after cruising through the first three-quarters of the season, are one losing streak away from a similar fate.

No one in the New York Mets’ long-suffering fan base, on the other hand, is surprised that Gotham’s second-best team once again suffered a brutal second-half collapse, falling out of contention after a promising start. That’s par for the course. What is surprising is the fact that the Mets’ best pitcher – who may also be the National League’s best pitcher – is a guy who throws the ball more slowly than anyone else in the major leagues. R.A. Dickey, a likable Tennessean with a sleekly groomed beard and a philosophical streak, was viewed as recently as 2010 as, at best, a “AAAA player” – slightly too good for the minor leagues, but barely filler material on a big-league roster, and certainly not a candidate for any team’s starting rotation. At this writing, the 37-year-old Dickey has won 18 games in 2012, which ranks second in the National League, and has the league’s lowest earned-run average. By both old-fashioned and newfangled “Moneyball”-type statistics he’s had a terrific season, and clearly ranks among the game’s best pitchers.

Dickey is the only remaining major-league pitcher to rely almost entirely on the knuckleball, one of the most mysterious and misunderstood phenomena in all of sport. A wobbly, unpredictable pitch with a misleading name (it’s thrown from the fingernails, not the knuckles) and almost no spin or rotation, the knuckleball defies all the normal logic and physics of a game that increasingly depends on strength and power. It is widely mistrusted by players, managers and fans, but when thrown correctly can render opposing batters helpless. It’s almost surprising that nobody has made the definitive knuckleball movie until 2012, but here it is: Ricki Stern and Annie Sundberg’s immensely entertaining, informative and even moving “Knuckleball!,” which immediately leaps near the top of the list of greatest baseball documentaries.

Stern and Sundberg could not possibly have predicted that Dickey would have such a great season, but the timing of this movie’s release couldn’t be more perfect. In addition to providing a little salve to Mets’ fans’ wounds and telling the remarkable comeback story of a likely Cy Young Award winner, “Knuckleball!” offers a little late-season catnip to baseball fans, tenderly capturing the loneliness and eccentricity of ballplayers’ lives. Previously the directors of “Joan Rivers: A Piece of Work” and the Darfur doc “The Devil Came on Horseback,” Stern and Sundberg began following Dickey and longtime Boston Red Sox knuckleballer Tim Wakefield at the beginning of the 2011 season. Both men faced obvious turning points in their careers: Wakefield had won two World Series championships with the Sox and was closing in on 200 career wins, but at age 44 he was also the oldest player in the major leagues that year. A 35-year-old who’d washed out three times with other teams, Dickey had to prove that his surprising 2010 season, which he began by pitching for the Mets’ minor-league team in Buffalo, N.Y., and ended with the National League’s seventh-best ERA, wasn’t a fluke.

Among baseball players, pitchers tend to spend the most time on their own, both literally and figuratively, and can often be seen as loners or eccentrics. And then there are knuckleball pitchers – there have been perhaps 70 or 80 in all of baseball history. They do something that requires intense concentration, agility and practice, but has little to do with strength or athletic ability, at least in the normal senses of those terms. As one commentator remarks in “Knuckleball!,” the pitch appears to require the fingertips of a safecracker and the mental discipline of a Zen Buddhist. It’s something like writing poetry, in that anybody can do it, up to a point, but hardly anyone can do it well. Dickey wryly observes that every single position player on the Mets throws a knuckleball in practice, and may privately believe that he too could parlay it into a pitching career. Wakefield would end his Red Sox career with the third-most wins in the team’s storied history, but even hardcore Soxaholics seemed to view his baseball longevity with suspicion; one Boston TV announcer cracks in the film that what will be left after the apocalypse are cockroaches and Tim Wakefield.

One of the most fascinating aspects of “Knuckleball!” is the portrayal of Dickey and Wakefield as members of a tiny confraternity where tribal loyalty runs deep and secrets deeper than those of the Masons are exchanged. They’re close friends who were both mentored and tutored by Charlie Hough and Phil Niekro, two of the greatest knuckleballers in baseball history. (Indeed, Niekro is a Hall of Famer and one of the best pitchers of all time, period. Hough might have ranked up there too, if he hadn’t been used exclusively as a relief pitcher for the first 10 years of his career.) It was Hough and Niekro, along with legendary reliever Hoyt Wilhelm, who cemented the stereotype of knuckleball pitchers as ageless and unathletic weirdos. While that’s partly unfair, there’s a germ of truth to it; all three pitched into their late 40s, and none of them would have lasted long in pro ball without the knuckleball. As Hough observes in the film, he grew up wanting to be a third baseman, but there was a problem: “I couldn’t hit, I couldn’t field and I couldn’t throw.”

Watching these guys sit around and swap baseball war stories is worth the price of admission all by itself (Niekro’s tale about how he got signed out of the Ohio coal fields is good enough not to spoil), but Stern and Sundberg keep the focus on the unlikely present-tense histories of Dickey and Wakefield, who gave the filmmakers remarkable access and are easy guys to root for. Both of them are in fact highly capable athletes, almost but not quite good enough to make it as more conventional ballplayers. Wakefield was a prospective slugging outfielder for the Pittsburgh Pirates who turned out to be hopeless with the wooden bats used in the big leagues, while Dickey bounced around between the major and minor leagues for several years as a normal fastball-curveball pitcher. (Before landing with the Mets, Dickey and his wife had packed up and moved 37 times in 15 years.)

Wakefield actually turned to the knuckleball quite young, becoming a Pirates rookie sensation in 1992 at age 25 (when he went 8-1 with a 2.15 ERA in just 13 starts) before flaming out just as spectacularly the next year. The Red Sox picked him up in 1995 and he spent a remarkable 17 seasons in Boston, pretty much epitomizing both the allure and the pitfalls of the knuckler. Basically, when Wakefield was good he was very, very good, and when he was bad he was awful. He ate innings, year after year, and rarely missed a start. Despite earning almost $56 million over the course of his career, he was probably underpaid relative to the “wins above replacement” he provided. (If your eyes just glazed over, don’t worry about it.) He pitched two brilliant games against the Yankees in the 2003 postseason, and then wound up as the goat of that memorable series after serving up a seventh-game, 11th-inning home run to the otherwise forgotten Aaron Boone.

As for Dickey, he turned to the knuckleball in 2005, as a 30-year-old pitcher with a defective elbow (literally – he was apparently born without an ulnar collateral ligament, or UCL) who was on his way out the door for the Texas Rangers. He didn’t master the pitch right away; the Rangers let him go after one terrible outing in 2006, and he didn’t play in the big leagues at all the next year. He served as a mediocre mop-up man for the Seattle Mariners and Minnesota Twins after that, and was the first player the Mets cut in the spring of 2010. But right about then he began to perfect his knuckleball, which he throws harder than Wakefield, Niekro or Hough ever did, and one day in Buffalo he pitched a highly unusual near-perfect game, giving up a hit to the first batter and then retiring the next 27 in order. Since that time it’s pretty much been a baseball fairy tale, and the Mets, a team not known for fiscal restraint or good sense, must be patting themselves on the back for holding a $5 million contract option on Dickey for 2013. (I know that’s a lot of money, but on the open market he would easily get two or three times that sum.)

Most wonderful of all, both Wakefield and Dickey come off as baseball nuts, devoted to the history of their game and their peculiar pitch, and aware both of their immense good fortune and their precarious place in history. Dickey has cautiously acknowledged, in fact, that his quest for the Cy Young Award this year is also a quest for knuckleball validation on behalf of the now-retired Wakefield and many others, including Phil Niekro, his brother Joe Niekro and Chicago White Sox great Wilbur Wood, all three of whom finished second in Cy Young voting in years when they probably or plausibly deserved to win. The Cy Young is voted on by sports journalists, who are widely perceived as biased toward traditional power pitchers like Johnny Cueto, the Cincinnati Reds flamethrower who is Dickey’s principal rival for the award this year. As Wakefield recently told the New York Daily News, “I hope the baseball writers don’t hold the fact that he throws the knuckleball against him. It is not a trick pitch. It is not a circus act. To use a word that R.A. uses, it is authentic.”

Some of the media coverage of Dickey’s amazing season has made it sound as if he's the last carrier of a dying flame, which may be a form of wishful thinking. Jim Bouton, the former Yankees, Astros and Braves knuckleballer and author of the memorable baseball tell-all “Ball Four,” says in the film that what baseball purists hate most about the knuckler – the fact that inferior athletes who master it can strike out the game’s greatest sluggers – is exactly what will ensure its survival. R.A. Dickey says he wants to stay in the game long enough to mentor the next knuckleballer, as Hough, Niekro and Wakefield have mentored him. He may not have to wait long. A Red Sox minor leaguer named Steven Wright, who mainly throws a harder, Dickey-style knuckleball, just concluded a fine season by winning a playoff game for their farm team in Pawtucket, R.I. With the Sox out of the playoff race, he may well get a look in Boston before season’s end.

"Knuckleball!" opens Sept. 20 at the IFC Center in New York; Sept. 21 in Boston and Nantucket, Mass.; Sept. 22 in Austin, Texas; Sept. 26 in Chicago; Sept. 28 in Columbia, S.C., and Santa Fe, N.M.; and Oct. 1 in Minneapolis, with other cities and film-festival screenings to follow. (See website for details.) It will also be available Sept. 18 on-demand from many cable and satellite providers, and online from Amazon, iTunes, VUDU, YouTube and other providers.